Legends and Lore of Limes Content from the guide to life, the universe and everything 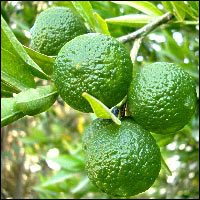 Limes are native to southeast Asia and Malaysia. The lime thrives in more tropical climates than its close cousin, the lemon. In the East and West Indies, it is used in chutneys, marinades, chillies, confections and drinks. The Kaffir Lime, Citrus hystrix, is one of the essential ingredients in Thai and Vietnamese-style cooking: this is a variety distinguished by bipinnate leaves and bumpy fruit with a pungent aroma. Both the fruit and the leaves are used as ingredients in cooking.

We've all heard the story of British sailors taking limes to sea to avoid scurvy, although nitpickers insist that Captain Cook actually used sweet lemons. Later, as Caribbean agriculture developed, limes became the more economical choice. To this day, Caribbean sailors take bottled lime juice to sea. Throughout the tropics, both East and West, lime is variously used as a cleaner, antiseptic, cosmetic, shampoo, insect repellent and all-purpose remedy. It is used especially for the treatment of dandruff, acne and digestive complaints.

Limes are used ceremonially in the Vietnamese New Year's Festival of Tet. Lime powder is sprinkled on the floor, or under a decorated bamboo pole, which acts as a kind of tropical analogue of a Christmas tree. Darts are dipped in the powder. The custom is associated with a story that has many variations but generally begins with the kingdom beset with demons. In one version, the Buddha negotiates a peace. Thinking it is a minor concession, the demons agree that the shade of a particular bamboo is off-limits to them, but the Buddha uses his powers to cause the tree to grow and spread to cover the entire land. He also anticipates that a few demons may cheat and continue to prowl, so he arms the people with arrows dipped in lime powder.

Whatever its efficacy against demons, lime appears to be protective against some more mundane intruders. In vitro tests show anti-microbial, anti-bacterial and anti-fungal activity. Secondary metabolites, the chemical weapons in the lime's defensive arsenal, can be used to deter some insect pests. Coumarins and flavonoids, found in lemons and limes, are under investigation for possible anti-oxidant, anti-inflammatory and anti-tumour effects1. According to aromatherapists, lime has a cheering, energising effect. Lime, however, has its negative effects as well, as the very components under investigation for the possibility that they may deactivate carcinogens may also neutralise prescription medications. In addition, 'Margarita dermatitis' is the scourge of beachcombers who prepare lime drinks in the sun. The sun acts on the lime juice to make it a potent skin irritant.

Limes in the West

The history of the introduction of limes into Europe and later the Americas is difficult to trace. For one thing, the event occurred centuries before the introduction of the Linnaean system, so names are confusing and descriptions ambiguous. For example, the linden tree is also referred to as the 'lime tree'. Medieval travellers were notoriously prone to favouring flamboyant storytelling over accuracy and, if modern historians are not to follow their example, it can only be confidently said that greenish roundish citrus fruit spread along the Silk Road sometime between antiquity and the time of the Crusades. Later, around the time of Columbus, lime somehow hopped across the Atlantic Ocean and began to appear in Florida, the West Indies and Latin America. Where Mediterranean recipes favour the lemon, tropical regions in the New World adapted lime to their local cuisine. It adds flavour to chillies, salsas, fruit punches and various confections. More northerly climes took a long time to recognise that limes had possibilities beyond adding a slice to tea or mixing it with Yukon Jack to make a snakebite2.

Key lime pie was originally an emergency food. In the days before transportation or refrigeration, residents of the Florida Keys had no access to fresh milk so they had to rely on sweetened condensed milk as a substitute for cream. They had lime from trees in the backyard and eggs from family chicken roosts. Somehow, someone came up with the idea of mixing the three together to make a custard.

Short on cooking oil? No problem. Lime congeals eggs if you give it time. Purists insist that uncooked lime pie is the authentic recipe but food experts cringe and warn darkly of salmonella contamination. A few limited studies suggest that lime is protective against food-borne pathogens but it is better to err on the side of caution. Modern recipes recommend cooking. Numerous variations evolved as cooks swapped recipes, and some even commit the heresy of substituting the readily available Persian lime for the Key lime. Key lime is a different variety with smaller, more acidic fruit that are highly aromatic. The thorny branches of the key lime make it unsuitable for widespread cultivation.

In the 21st Century, the Internet, cheap air travel and ethnic restaurants have brought limes to the attention of cooks in the higher latitudes. Some environmentally conscious homemakers have substituted lime juice for commercial cleaners. The citric acid in lime removes grime and the fragrant aroma gives the boost needed to get on with routine chores. The story of lime continues. So far, studies have focused on the phytochemicals lime shares with lemon and other citrus fruits. The constituents that make limes unique await further research. But you only need to wait for summer to squeeze some limes, add ice water and sugar (the real Jamaican caña, not the white supermarket stuff) and sip it out on the patio.

1No information in this Entry is intended to be construed as medical advice, for which you should always consult a professional.2Snakebite refers to the North American recipe, not the British mixture of lager and cider. Yukon Jack is advertised as 'the black sheep of Canadian liquors'. It is something of a cult classic among the Canadian field and stream crowd.