Pancakes Content from the guide to life, the universe and everything 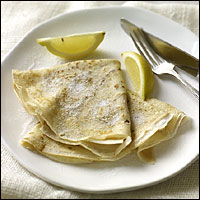 A thin flat cake made of batter, pancakes are a divine form of saying 'I Live'. The origins of this dish lie in the darkness of previous ages. Presumably, people were making thick pancakes on hot stones or tiles slipped into the embers of fire from a cooked cereal mush. Archaeologists excavating Stone Age Swiss lakeside settlements have found well-preserved examples of cakes made of pure wheat, millet or barley. In the Middle Ages pancakes were known by the word frayse, the origin of the word is thought to lie in the sound made by the batter as it is poured into the pan.

Their shapes range from fatty and thick specimens with a low radius, to flat crêpes with an extensive diameter. Pure in making, rich and diverse in taste they certainly belong to the higher products of humankind.

In astronomy a Zel Dovich Pancake is a massive protocluster of galaxies, huge agglomerations of matter that would have formed in the early universe from fluctuations in the density of matter; gravity would cause them to flatten into 'pancakes'. Later still these structures would fragment into galaxies.

Make small, thin pancakes but cook them on one side only. Put 2 cups of curd (tvorog), 2 egg yolks, 3 tablespoons sugar, grated peel from 1 lemon or orange, 2 tablespoons melted butter, 1 tablespoon sultanas and salt as filling on to the fried side of the pancakes. Fold them up like an envelope, brush them with egg white and fry them in butter until golden brown all over.

The batter for this pancake of Eastern European origin is made just as the basic pancake. Depending on the filling, water may be used instead of milk to conform with kosher rules. Fry the pancake on one side only and fill it with either cream cheese, cottage or pot cheese (or a combination); apple and cinnamon, fruits and preserves; minced meat. Fold it over like an envelope and fry it in butter or oil.

A yeast pancake made of half wheat flour and half buckwheat flour, yeast, butter, milk and eggs.

The batter is left to prove a bit. Fry the pancakes and spread with caviar or melted butter and place them on top of another until a small pile is made. Bliny are served with sour cream (smetana). They used to be eaten a lot in Russia during the Carnival before Lent.

The Finnish word for bliny, always eaten at Shrovetide.

A dish of pancakes filled with mashed calves' brains, onion, parsley and eggs. When filled and rolled up, they are dipped in egg and breadcrumbs and fried in deep fat.

This most famous pancake is easy to taste: just look for the stall at the nearest funfair. The most usual crêpes consist of 0.5lb (225g) flour to 4 eggs. Then add 2 tablespoons each of cream, melted butter, and Cognac, then three quarters of a pint - 450ml - milk and beat all well. The mixture is fried in spoonfuls. A pinch of sugar or salt is added to the batter, depending on the pancake being sweet or savoury-filled.

Crêpe Suzette - A very thin pancake made with crêpe batter, flavoured with 2 tablespoons of curacao and a little orange juice. When cooking the pancake, spread it with butter mixed with sugar and beaten with orange zest and a little curacao. Fold it in four, pour a little of the alcohol over it and serve (or eat) very hot.

After cooking the basic pancakes fill them with a mixture of 0.5lb (225g) cooked spinach, 4oz - 100g - cream cheese, 1 egg, 1oz - 25g - grated parmesan cheese, and 2 or 3 chicken livers (sautéed in butter). Then roll them up, layer them in a casserole with sauce bechamel and finish with a layer of spinach-only filled pancakes. Surmount that with slices of thin bel paese, sprinkle with grated parmesan cheese and dotted butter and bake in a hot oven for 20-30 minutes.

Produce the batter of this griddle cake with 0.5lb (225g) flour, 1 teaspoon baking powder and salt, 2 tablespoons butter, 2 eggs separated (white stiffly beaten and added last), all mixed to a soft dough with 1.5 pints (900ml) buttermilk. Bake them on a hot, greased, griddle and top with chicken or turkey hash. Most people, however, eat them only with butter and maple syrup. Other grains such as whole wheat, oatmeal or corn meal can also be used and often a small amount of sugar is included in the batter.

There are several ways to prepare this popular thin pancake, but the basic method uses 3 beaten eggs, and a pinch of salt well mixed with 3oz (75g) flour, to which a half pint (300ml) water is gradually added. Melt a little butter in a skillet and brown a small quantity of batter on one side only, roll it up, and sugar it (sometimes ginger, jam or marmalade is substituted for sugar). Another method is to make the flensjes the day before, leave them unrolled, serve them flat in layers, with custard sauce in between each layer, and chilled.

Fill these basic pancakes with grated pecorino or parmesan cheese mixed with chopped ham. Roll them up and place them side by side in a greased baking dish. Half-cover with boiling chicken stock, place the lid on the dish and leave them to stand in a warm place for 5-7 minutes before serving them.

Sift 5oz (150g) flour, a quarter teaspoon of salt, and a quarter teaspoon sugar together. Add 4 beaten eggs and then a quarter pint (150ml) milk. After further beating (go ahead, it didn't do us any harm, did it?) add another quarter pint (150ml) - milk and leave the mixture standing for 3-4 hours, after which include 3 tablespoons cold water. Fry the pancakes in butter and spread with raspberry jam or red currant jelly.

To produce the batter for this traditional Dutch dish, add 2 beaten eggs to 5oz (150g) flour, 1 teaspoon baking powder and a pinch of salt. Then gradually stir in 8oz (225g) warm milk mixed with 8oz (225g) water to form a batter. Melt a small amount of lard or oil in a large frying pan and pour in enough batter to cover the base. Brown the batter on one side, add more fat and turn the pancake around. The pancake is often baked with bacon and served with molasses. Or fill them with custard saus.

A variation is drie in de pan (three in a pan), using the batter above with raisins. Cook three smaller pancakes at the same time and eat them together, either hot or cold, with sugar.

This pancake is traditionally served on Thursdays. They are cooked in a special pan called plättlagg, which is why they are sometimes called plättar. Stir quarter pint (150ml) milk into 3 beaten eggs and add 2 tablespoons melted butter. Beat in gradually 5 oz (150g) sifted flour mixed with salt, after which add another quarter pint (150ml) milk. Leave the resulting batter standing for 1 hour, then cook the pancake in the usual manner. Serve with syrup, jam or spiced cranberries.

For the batter of this thick Finnish pancake mix 1 pint (600ml) milk with 5oz (150g) coarse flour and salt. Than add 2 beaten eggs, 2 tablespoons sugar and 1 tablespoon melted butter. Pour into a greased pan and cook for about 20 minutes. Serve cut into wedge-shaped sections with sugar and jam.

Serve the pancakes filled with peanuts, cinnamon and sugar, mixed with thick cream

Spread the cooked pancakes with minced ham and mushrooms, sprinkle them with grated cheese and sour milk or yoghurt. Heat them for about 10 minutes in a moderate oven.

In the US, palacsinta are prepared with a filling of 1lb (450g) cottage cheese mixed with 8oz - 225g - sugar, a few drops of vanilla extract and 1 well-beaten egg. When filled, roll them up and heat them in a greased dish and serve topped with sour cream and preserves as a main course, not a dessert.

Not to be mixed up with the Berlin word for doughnuts, pfannkuchen are eaten with a mixture of cinnamon and sugar, Apfelmus (mashed apples or apple stew2) and a number of food preserve eg, cherries or pineapple.

It is a well-known fact that the first attempt of the cook to create a pancake will never, ever actually produce one. Even professional chefs will see their first one disintegrate into shapeless bits and pieces. (In Austria, people gave up their resistance against this phenomenon, embraced it and created Kaiserschmarrn, a very tasty dish). There are many theories attempting to describe this phenomenon, although the truth might be far more complicated (or weird) than we can imagine:

The first pancake is a sacrifice to some ancient pagan pancake gods who demand compensation for the atrocities that their subjects have to suffer from during their short existence.

It is a well-placed allegory to remind us that every time we perform, we should think of ourselves as beginners who have a long, long way to go to perfection.

Nobody is patient enough in their pursuit for the meal and pours the batter in the pan without letting the oil get hot enough.

1This requires practice and is not advised unless experienced.2This is absolutely necessary; under no circumstances are the sublime joys of this ingredient to be missed.