Bread and Butter Pudding Content from the guide to life, the universe and everything 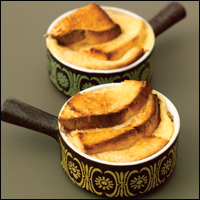 Not wishing to waste whatever bread they were able to obtain, the poor would steam stale bread and add numerous mixtures to it - from fruit to meat - and then place the concoction into the oven for baking: this was to become the first bread pudding.

As time passed and more worldwide foods became available, people became more inventive, adding spices or different types of fruit. It was around the start of the 17th Century that bread pudding started to make its way into the mainstream population.

With the working and middle classes being able to afford more luxurious foods, which, at the time included fresh eggs, milk and sugar, they had all the ingredients they needed to make the first bread and butter pudding.

The basic pudding ingredients stayed pretty much the same until the middle-to-late 20th Century. With the worldwide market thriving and more ingredients becoming easily accessible, including a wide variety of desserts, the lowly bread and butter pudding became the slave of the school dinner ladies, the butt of many a school dinner joke. By the beginning of the 1990s, this humble pudding had become all but extinct.

The likes of 'Blue Peter' and Delia Smith had managed to keep the torch burning, but it wasn't until the birth of the celebrity chef and the torrent of cookery shows that this quintessential British pudding was to make its comeback.

Celebrity chefs such as Gary Rhodes and Jamie Oliver have a love for British cooking and re-invented the bread and butter pudding, adding their own styles and ingredients, even serving it in their own - very expensive - restaurants. At the start of the 21st Century, the bread and butter pudding had not only won the hearts of the British, but was also favoured by tourists wanting to sample traditional British cuisine.

Other Cooking Methods and Ingredients

The recipe and method above is the basic bread and butter pudding. The re-invention of the pudding brought a number of differing ingredients. One of the main additions was a small pinch of cinnamon, mixed in with the milk and eggs. Other ingredients include:

These are just a couple of additions to the basic recipe and are added to the milk and egg mix2, but you can generally experiment with what flavours suit you best.

The other difference is in the cooking method; instead of straight baking, you can use a Bain-Marie. Follow the basic method instructions, then place your pudding dish into another container which is slightly larger than the one you are using for the pudding, leaving enough room for steam to circulate. Then half-fill the larger container with hot water. The Bain-Marie method may require extended cooking time.

1You may need to add extra milk if required.2In the case of using cocoa powder, you will have to warm the milk slightly.