I'm Sorry I Haven't A Clue - the Radio Series Content from the guide to life, the universe and everything 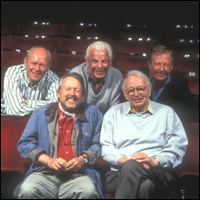 I'm Sorry I Haven't A Clue is the name of a radio series on BBC Radio 41. It is billed as 'The antidote to panel games' - and it is.

Rather in the way that every new programme broadcast these days is about gardening or cooking, when this programme started in 1972, all new commissions appeared to be panel games. Four celebrities past their sell-by date would attempt to play a parlour game convincingly which had gone out of fashion some decades before, compéred by whatever pantomime stalwart happened not to be booked for the summer season that year.

But I'm Sorry I Haven't A Clue broke the mould. In fact, they took the mould, smashed it into small pieces and reassembled it into a fake 'art' object, as if to sell to Tate Modern2.

Crucial to the success of any panel game is the chairman. Here the producers made an inspired choice: Humphrey 'Humph' Lyttelton, jazz trumpeter and owner of the most dead-pan delivery since Pan died. Since the death of Humph in 2008 at the age of 86, a series of guest hosts have stepped into the breach, including Stephen Fry, Jack Dee and Rob Brydon.

Now add the panel. Several people have been on the panel, including John Cleese of Monty Python fame, but after a while the regular panel settled down with ex-Goodies Graeme Garden and Tim Brooke-Taylor, comedy genius Barry Cryer and Private Eye cartoonist and ineffable humourist Willy Rushton. Others, including comedians Jeremy Hardy and Paul Merton, have made guest appearances, more so since the tragic death of Willy Rushton in 1996. And seated at the piano, the butt of all the musical jokes, is Colin Sell.

A comparatively recent addition is the delightful Samantha, the show's glamorous scorer. She gets the teams' points up with alacrity - although occasionally other commitments force the substitution with the equally sublime Sven. Strangely, neither character ever says anything, but their existence is commonly confirmed by suitably risqué comments from the host (bear in mind this is a radio show, so neither Samantha or Sven can be seen either).

Dorset's most remarkable attraction is the Cerne Abbas Giant, a graphic representation of a naked man cut into the chalk hillside. Many people join the distinguished Cerne Abbas Society, and each May Day the society marches through the town, led by its longest standing member
- Lyttelton's Britain

Originally, the show was recorded in London each week, but in later years became peripatetic. Episodes are now recorded all over the UK, and each show begins with the host giving a brief description of the place the episode is currently visiting. This is inevitably rather rude about the shortcomings of the city or town in question, and will almost certainly include at least one ludicrous innuendo. Humph was a master at delivering these in complete innocence, with utter bewilderment that the audience might interpret his words as anything else. The best of Humph's intros, which were written by Iain Pattinson, have been collected in the book Lyttelton's Britain.

What games. Loosely based on old-fashioned radio panel show games, and even more loosely based on the English language, the games vary from the sublime to (more rarely) the intelligible. Here are some of the more popular ones:

In Cheddar Gorge, obviously, players must provide one word each in turn which added to the previous submissions makes up a coherent sentence - challenging enough, you might think, but the aim of the game is never to utter a word which might be construed as actually finishing the sentence.

Ah, the ethereal tone of the swannee whistle. Oh, the earthy rasp of the kazoo. Aaargh! The duet between these two mismatched instruments!

Mornington Crescent is the Underground station that contestants must aim for in this frighteningly subtle game of strategy. A famous game whose variations outnumber the stations on the famous London Underground map, and whose fiendishly complex rules baffle all but the most seasoned player. Who can say why Rushton's 'gambit' is illegal on the double oblique except when in 'spoon'? Who can tell when the secondary reverse is disallowed?

There have been scurrilous rumours that there are no rules at all, and that the players merely make it up as they go along. This is a disgraceful slur upon the highly professional teams who have, over the years, raised the game almost to the status of inclusion in the Olympic Games. They are reputedly now third on the waiting list, behind Scrabble.

One Song to The Tune Of Another

It is hard to explain the rules of this particular game, involving as it does the combination of the lyrical or rhythmic component of one piece of music, with the libretto of another; the couplets of the latter being matched to the cadences of the accompaniment to the former in order to create a new, and occasionally harmonious, whole.

Colin Sell provides his inimitable piano accompaniment and the result is as often sublime as ridiculous. Did you know, for example, that it is possible to sing 'Jerusalem' to the tune of 'The Birdie Song'?

A pearl without price is the singing voice of Jeremy Hardy. A disc is placed on the gramophone (this is the BBC, remember) and the player sings along. After a few moments, the volume is turned down and the player sings unaccompanied. Once they have made a complete ass of themselves for long enough, the music is faded back in and points are awarded for being within a gnat's crotchet of the original.

The crowning glory of this game was Tim Brooke-Taylor singing 'The Lion Sleeps Tonight' with everybody else joining on the wim-bo-wehs. A truly sublime radio moment.

The more astute amongst you may have noticed that charades is a game in which the uttering of any sound is forbidden. Equally, radio is a medium not particularly well suited to the art of mime.

Fortunately, the teams are allowed to make sound effects and deliver dialogue as long as it is in the form of a clue rather than the actual song, play or film title in question. For some unaccountable reason Graeme and Barry are inclined to use somewhat unconvincing Scottish accents for this purpose.

For this and similar games, the answer that one team is trying to guess is displayed on an extremely hi-tech, state-of-the-art laser display board3 for the benefit of the live audience.

The literary minded will be familiar with the limerick verse form. Here, the host provides a first line and the players provide the succeeding lines in turn. It is a point of special pride to include words whose only obvious rhymes are very rude indeed, to see how the following player gets out of it without offending a family audience.

The teams are challenged by their opponents to sing a calypso (or a blues or, unsurprisingly, a madrigal) on a subject of the challenger's choosing. The Goodies' seminal record 'Sick Man Blues' is a perfect example of this art form at work.

A variation involves film clubs; hence the Cheese Manufacturer's Film Club would be likely to enjoy a screening of the 'Edambusters'.

Such timeless classics as:

The score is a matter of great importance. Points are awarded after each round, much in the manner of Whose Line Is It Anyway? (a cheap TV rip-off of the formula), but using a somewhat more complex scoring formula.

At the end of each game the audience wait with bated breath for the scores to be announced. At which point the next game commences.

I'm Sorry I Haven't A Clue attracts a devoted following, from those who provide the raucous laughter on the live recordings, to those who inhabit the BBC Mornington Crescent message board. Mention must be made, however, of one Mrs Trellis of North Wales, a regular correspondent of the show. Her letters are a regular source of bafflement to host, panel and audience alike.

Often imitated, never equalled, I'm Sorry I Haven't A Clue is a programme to delight and amuse anyone whose sense of humour tends to the frankly silly.

So, as the short-sighted terrier of Time chases the startled stick insect of Hope, and the supple dachshund of Fate is knotted by the absent-minded balloon magician of Eternity, it's time to say goodbye.

1BBC Radio 4 was the original home of the first incarnation of The Hitchhiker's Guide To The Galaxy2Tate Modern, in London, UK, is a national modern art gallery, which displays often controversial and frequently unconventional art pieces.3In reality, the producer wandering on with the answer written on an old piece of cardboard.