Mornington Crescent - the Game Content from the guide to life, the universe and everything 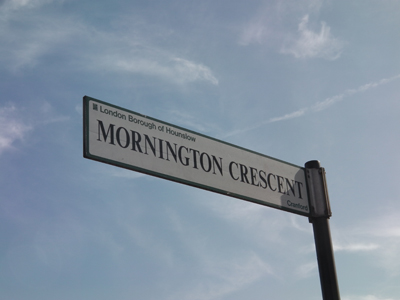 Mornington Crescent is an ancient and complex game whose origins are shrouded both in mystery and history. Although no-one can say for definite when the game was first played, something very much like it was being enjoyed by the Romans before the invasion of Britain in 43 AD. When the Romans left Britain, the game continued to be played, although those who played ran the risk of being labelled as Roman collaborators. Thus any mention of Romans or the game's Latin name had to be discarded. Thus, by a linguistic process too complicated for an Entry such as this, the name of the game evolved over the centuries into 'Mornington Crescent'.

By the time of the Battle of Hastings, Mornington Crescent had become popular with French nobility, who were amazed to find the game played in England. The subsequent publication of the Domesday Book was invaluable to the French invaders wishing to brush up on the rudiments of the game.

The playing of Mornington Crescent was revolutionised by the development of the much loved London Underground map by Harry Beck in 1933. This allowed formalization of the rules and was, of course invaluable to international players who had never set foot on, or even heard of, the London Underground.

Thanks to the efforts of scientists, explorers and writers everywhere, Mornington Crescent is now played, and occasionally enjoyed, around the world. Except Guatemala. As The Little Book of Mornington Crescent notes, the game has now been translated into

Generally speaking, the board, pieces and booklet will only serve to confuse the players, and are best discarded
- The Little Book of Mornington Crescent

The full rules of Mornington Crescent are long, detailed and extremely complex, although the game is simplicity itself. Play advances in sequence, with each player or team moving ('striking') a new location each turn. For example2:

What makes the game simultaneously unique, difficult to master, and fun to play, is the almost endless list of variations on the basic rule. The I'm Sorry I Haven't a Clue website lists 55 examples of variations, and many hundreds more can be found in the rules.

Naturally, the rules of the game continue to evolve in parallel with developments in London itself. Recent events such as the introduction of the congestion charge ('New Standard Livingston Rules'), the rise in popularity of reality television ('Elimination Mornington Crescent') and the domination of young people's lives by computer games ('Playstation 2 Rules') have all found their way into Mornington Crescent.

In essence, though, the rules of the game can be distilled into two simple statements:

The Truth About Mornington Crescent

Now, that would be telling...

OK, if you really, really, really want to know, you could read this article. It's written by someone who clearly isn't much of a fan of the game, so they could well be lying.

1Translated as 'I shall not be a crestfallen iguana'. Taken, as with much of the information in this Entry, from The Little Book of Mornington Crescent. Brooke-Taylor T, Garden G, Cryer B, Lyttelton H (2000).2And a highly simplified example it is too.