Visit to the Leicester Space Centre 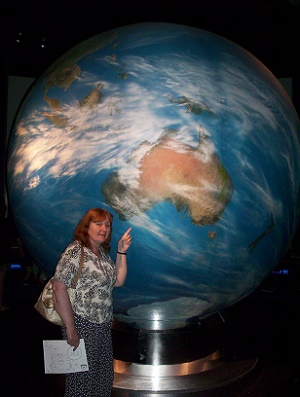 On 12 August my partner Ian and I boarded a coach to go visit Leicester Space Centre. It's a big place, we had six hours to explore and that was barely adequate. There are original space vehicles and copies of rockets which look very realistic. Plenty of interaction with space-oriented stuff and I particularly enjoyed the 'game' of the Drake Equation which, using my best guesses, turned out as '1' (intelligent civilisation in the galaxy that we could communicate with). My favourite part was when we got to see the 'We Are Stars' 4D presentation in the Sir Patrick Moore Planetarium. Other highlights were finding posters detailing how human waste is collected on board the ISS - if you really want to know - and an actual space station toilet, space food items, etc. There's a life-size model of a section of the ISS which I happily stepped into, and beneath my feet there was a distant view of the Earth. As Ian followed me in he noticed that the Earth was actually moving and he quickly got out but I loved it. The posters of the astronauts in the heroes gallery were very moving to read. I honour them all.


Ian particularly enjoyed watching a copy of Le Voyage Dans La Lune and we'd have happily sat through it again but for time restraints. The café is set up beneath two rockets which are preparing for lift-off. One table has buttons to press if you wish to be enveloped in the smoke! We watched several children have a go then Ian photographed me beneath the rocket exhaust just as the countdown reached zero. I was glad it wasn't real! There's a booth where you can pretend to be a weather forecaster on different worlds. This was great fun to do and I eagerly awaited the link to the video which I could email to myself and publish online later. Unfortunately the equipment failed, even a technician couldn't sort out the problem, which was an error on the barcode of my entry ticket. (These had been purchased in bulk by our driver as part of our package.) Other people seemed to have no problem at all in inserting their tickets for the code. You win some, you lose some. I could have re-recorded my extra-terrestrial weather forecast but the queue was too long. It was a very popular attraction with plenty of kids and adults alike participating. Everyone looked like they were having a great time, I can certainly recommend this place for a family day out. Do get there early and allow plenty of time to get round everywhere, there are several floors to explore. It is a wheelchair-friendly facility with ramps and lifts. My photos are here: GB's photos.

It's all about the Moon again this month. There will be a total lunar eclipse at full moon phase on 28 September coinciding with perigee (when the Moon is closest to the Earth, a so-called 'Supermoon'). There will be photo opportunities for this event from the eastern Pacific regions, eastern US, South America, western Europe, Africa and west Asia. Counting on clear skies, people not in those areas can witness a partial lunar eclipse of the Supermoon. As it happens to fall on a Sunday night into Monday morning, this promises to be the (eye witness) astronomical event of 20151.


Babe Among the Stars Archive

1For me, nothing this year can beat the moment I first saw the New Horizons image of the heart-shaped Tombaugh Regio on Pluto.