This week we visit the h2g2 Space Centre, an amazing place -- almost a city of its own -- under the leadership of Alien. 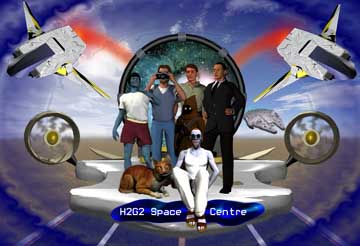 As you approach the Centre it seems almost to be an optical illusion. You think it must be right in front of you when it's still quite a ways off -- it is simply immense! The huge building is floating just above the ground, shining in the sun, with some spaceships flying around it and others docked or parked in their hangars. A teleport takes you into the heart of the centre, and your first thought is 'I need a map!'.


Fortunately, a useful directory of navigation links helps you find your way around the Centre, which really is an entire community. And dozens of helpful staff members will assist you in finding what you seek, although you may just wish to wander and explore the various corridors, offices, shops, hangars, and more.

Alien had only been here a short time when she realized that h2g2 needed a Space Centre.


Already from the beginning I had a vision how the Centre would be - a place for
people to come and leave their spaceships when they're staying in h2g2, rest
between space journeys and generally enjoy being a part of the virtual reality
of h2g2.

So she started planning the construction with the assistance and expertise of Greebo T. Cat, who eventually became co-owner of the Centre. The Centre opened in late March, 2000, and has been constantly growing since then, with an expanding staff and new sections opening every month.

An important location in the Space Centre is the Hangar Rental Office, where visitors can request a spot to dock their spaceship. The Centre has everything from small hangars for single-person ships to immense hangars that can handle colonization ships, plus facilities for dealing with a transport base for ships so large that they must remain in orbit. Hangars can also be rented for use as an office or business. Most hangars are rented under long-term contract.


There was some confusion at one point because the office had 'Hanger Rental Office' (instead of 'Hangar') painted on the door, and people kept coming by requesting assistance in hanging up their clothes. I believe the sign-painter was sacked, and the door sign was later properly re-painted.


The appearance of a Death Star at the Centre caused some consternation a while back. The Death Star requested a hangar, but then seemed to misunderstand the concept and docked the Space Centre inside itself, rather than the other way around. It didn't hang around long, fortunately.

If you don't have your own spaceship, but need one for an adventure or journey, there are also usually spaceships for hire available at the Centre.

Carefully contained behind heavy security is the Space Centre Biome. Why the security for a bunch of plants? Well these aren't just ordinary vegetables and flowers -- they are samples collected from all over the galaxy, along with some very experimental modifications from Crater Labs, Inc. Some are sentient. Some are extremely dangerous. And some will happily nip off to the stream and wash themselves up to be your picnic lunch. Ranger Triff, a triffid with perhaps a questionable past, and poor spelling, rides herd over the rest of the plants. One of the sentient plants even went on to become a major Presidential candidate!

It eases the minds of Space Centre visitors to know that they are completely safe at the Centre, with a top-notch security team watching over their safety. If you walk into the Security Office you'll find Security Chief Big 'Evil' Dan ('Shooting people counts as fun.') and his deputy Chrome101, the Security Officer, eating donuts from a vending machine and abusing prisoners or each other (which usually is the same thing).


When justice needs to be served, The Courthouse takes charge, under the leadership of Judge AXR. There has been a rather sensational case recently with the Security Officer himself on trial. The complex court case involved a water cooler, a big gun, and an angry blob of water, and ended up being a rather nice steak dinner.

Why go to a boring shopping mall when you can shop at the Space Centre? Make sure you take some time to browse through the interesting, useful, and unusual shops.


The Uniforms and Space Clothing Store is the perfect place to get the highest quality space suit, along with some very unique and high-tech specialty clothing for a variety of purposes. Lintilla, The Head Officer of Personnel Regalia and Pan-Galactic Vesture, has a huge selection of fabrics and is a whiz at putting together perfectly fitting outfits which meet your needs perfectly. Some of the more unusual items she carries include fabrics with SEP fields, sewn-in pocket-sized teleports, and bullet-proof fabric coatings.

24-Seven, The Space Centre Convenience Store, run by Witty Moniker carries a variety of merchandise, including newspapers, ice, health and beauty aids, baked goods, frozen foods, and even Slerpeez. Just about anything you need from a convenience store is available, from sandwiches to the latest copy of 'Hot Klingon Babes', but don't expect to find tobacco products. The store also carries enough variety of fresh and prepared foods to help supply restaurants, and delivery is available (only to proper threads within its delivery radius).


Androyd's Junk Emporium is located in Hangar 12 of the Space Centre. Androyd carries a wide range of classic and unusual items, including some intangibles, curios, good advice, and even junk food. Since the junk items are actually guide entries, you can spend quite a bit of time, wandering through the aisles perusing and reading about these interesting cast-offs.

When you're ready for a break from shopping, or if you've just returned from a harrowing space journey, you definitely need a drink, and once again, the Space Centre comes through for you.


Greebo's Cheshire Grin Inn is a subsidiary of the Centre and a great place to go for a drink, hear some good music, or attend parties that last 6 months or longer. The Roving Reporter unfortunately wasn't able to spend much time there, but plans to return and tell you a little more about it in a later column.


More Places on the Tour

The Spaceport Terminal controls the traffic of ships around the Space Centre. You may find SpacePort Control Officer Ajdecon asleep at his desk, there, so dock at your own risk. If you love gadgets, you'll get a kick out of the set-up in The Engine Room, where Chief Engineer A. Moose can provide you with gizmos for your ship, and he can fix just about anything, from spaceship drives to half-eaten donuts. Nearby is the Space Centre Chemical Lab, run by The real Mad Max, who will help you determine the right composition for your hull. Science Officer Afgncaap5 can often be found there as well (when he's not in the Biome). The Chemical Lab can also be of use in investigating strange substances.

If you're interested in becoming part of the ever-growing staff at the Space Centre, stop by The Employment Agency, where you may be able to get one of the plethora of exciting job titles available. There has been some difficulty keeping the position of Cannon Fodder (AKA Red Shirt) filled, so if you're interested in that position, you're likely to be hired quickly. The Agency will also help find qualified employees for other ventures at the Space Centre.

Of course, these space jockeys don't spend all their time in the bar or the shops. Have space ship, will travel -- and most travel here involves adventure, battles, and bizarre events.


There was an attempted mission to visit God's Last Message to His/Her/Its Creations, which never quite got off the ground, and the ship ended up turning into a jungle for some reason. There was also a journey to Aldebaran which seemed to included a rescue mission and the firing of some coconuts at invaders.

One of the major adventures that has happend through the Space Centre is still in progress. The
purpose of the mission, for the good guys, is to take a treaty to the
world of Zork from the world of h2g2 for signing. Once it is signed, it
needs to be returned for signing at h2g2. Along the way, the bad guys
have tried to stop the mission, but so far have not succeeded. It can be
somewhat difficult reading for outsiders, since the good
guy/bad guy threads often intertwine. Currently, the good guys have
managed to land on Zork and have gotten the signature of the Queen, and now need the signature of the Dungeon Master. The bad guys are
hot on their trail and almost foiled the Queen's signing by kidnapping
and impersonating her. They surely have some more tricks up their sleeves. Current threads are good guys, bad guys1.


If you're looking for excitement, check the The Journey Schedule, where you may find an excursion ready to take off, or help find crew for your own adventure!

A place for the space traveler to call home...


...and your gateway to adventure!

1Thanks to Garius Lupus for research assistance.