'Around the World in Eighty Days' - a Novel by Jules Verne Content from the guide to life, the universe and everything 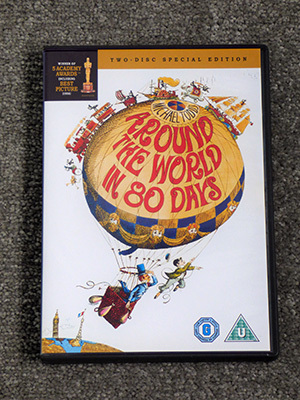 Around the World in Eighty Days is a novel by Jules Verne published in 1873 under the title Le Tour du Monde en Quatre-vingts Jours. Jules Gabriel Verne (1825-1905) was French, and was born in Nantes. His other best-known books are Voyage to the Centre of the Earth (1864) and Twenty Thousand Leagues Under the Sea (1870), as translated from the French.

Around the World in Eighty Days is essentially a travelogue and to avoid the inevitable monotony some sub-stories are introduced.

Firstly, the main characters in the novel are as follows:

The main story begins at the Reform Club on 2 October, 1872 when a discussion takes place between Phileas Fogg's whist-playing companions - Andrew Stuart, an Engineer, John Sullivan and Samuel Fallentin, Bankers, Thomas Flanagan, a Brewer, and Gauthier Ralph, a Director of the Bank of England - about the theft of £55,000 from the Bank of England by an opportune gentleman thief.

The general opinion amongst the group is that the thief would have fled abroad anywhere in the world. Phileas Fogg points out an article in the Daily Telegraph, which purports that a person could circumnavigate the globe in 80 days. An argument as to the validity of this claim occurs amongst the six companions, with Fogg concluding that it could be done and the others disagreeing. A wager inevitably ensues, with Fogg betting £20,000 for and the other five putting up £4,000 against. A paper is rapidly drawn up and signed by all six to the effect that Phileas would start that very day, Wednesday 2 October, and would win the bet if he appeared at the Reform Club on or before 8.45pm on Saturday 21 December, 1872. As Fogg estimated it would cost him £20,000 to traverse the world, he stood to break even if he won the bet or face ruination if he lost.

Stopping off at home to pack a few articles of clothing in a bag plus £20,000 in cash, he and Passepartout set off on their journey by taking the train to Paris, then on to Turin and Brindisi. They arrive at Suez on 9 October. This is where Mr Fix the detective appears, convinced that Phileas Fogg is the runaway thief.

Travelling by steamer the pair go via Aden arriving at Bombay on 20 October. Next they go by railway to Allahabadd, where the line ends, and they resort to continuing to the next rail station by elephant. On their way they encounter a Suttee and agree to delay their journey by rescuing Aouda from death by fire. Passepartout achieves this by secreting himself on the funeral pyre. When it is ignited, he rises up, confusing the mourners into thinking the dead man has come to life. Passepartout seizes Aouda and flees to the safety of his companions. They all continue their journey by elephant. On reaching the next rail station, they travel to Calcutta, arriving on 25 October.

Their journey continues by steamer, taking them to Singapore on 31 October and then to Hong Kong on 6 November. In the meanwhile, Mr Fix is attempting to get an arrest warrant for Phileas Fogg. Being unsuccessful, he starts to travel on the same ships as him. He attempts to befriend Passepartout and surreptitiously questions him about his master. Indeed, at Hong Kong Mr Fix lures Passepartout into a drinking and opium den. Passepartout passes out and thus fails to advise Fogg that the ship for which they have tickets is setting sail 12 hours ahead of schedule. Fogg tries to locate the relative of Aouda in Hong Kong but decides to let her travel on with him to England.

So Fogg and Passepartout voyage in separate ways to Yokohama where they meet up again on 14 November. Passepartout has been working in a circus to earn enough money to cover his food and lodgings.

For their journey to San Francisco, a balloon trip across the Pacific is considered but quickly discounted as it would be foolhardy and so the normal steamer passage is effected, arriving there on 3 December. A rail journey is undertaken with the usual difficulties being encountered, such as a Sioux Warrior attack. They arrive in New York on 11 December.

An expensive and hazardous journey is taken by steamer - Fogg eventually buys the ship - and they land in Queenstown2, Ireland. Embarking on another steamer the party, including Mr Fix, arrives in Liverpool at 11.40am on 21 December, leaving ample time for Fogg to travel to London to meet his deadline.

At this point Mr Fix arrests him for the suspected robbery and does not release him until 2.33pm. In an act of violence Phileas Fogg knocks Fix down with his fists. Ordering a special train to London he arrives at 8.40pm. With no time left to get to the Club he concludes he has lost the wager and is ruined.

Phileas spends the evening and following day (Sunday) in an uncommunicative way, busying himself with sorting out his affairs. He has spent £19,000 in expenses and plans to divide the remaining £1,000 between Passepartout and Mr Fix3.

He seeks an audience with Aouda at 7.30pm and during the conversation she proposes marriage to him. Passepartout is sent off with alacrity to see if the vicar of Marylebone Parish will marry them the next day. Passepartout returns claiming that the marriage cannot take place the next day, because today is Saturday4.

Phileas, shaken out of his reverie, speeds to the Reform Club and presents himself to his friends three seconds before the deadline with the words, 'Here I am, gentlemen.'

How do we consider the book as a whole? There are a number of implausibilities:

In summary Around the World in Eighty Days is a readable6 book with mild excitement and an irritating contrived suspense at the conclusion. Surprisingly this Researcher found the book was not readily available in many public libraries except in large print. Not for young eyes then?!

This Entry could conveniently end here, except that a movie of the same name was made in 19567 produced by Mike Todd and directed by Michael Anderson of Dambusters (1955) fame.

The film starred David Niven as Phileas Fogg. Niven was 46 and little acting was required as he certainly looked the part.

Robert Newton, aged 50, played Mr Fix8 with his well-known 'manic' eye expressions for which he was famous following roles such as Long John Silver in Treasure Island (1950).

Princess Aouda was played by Shirley MacLaine, aged 22. It was not a very exacting role and the audience at the time were unaware that she would become such a famous film star.

The movie is 175 minutes long, although when sitting in your cinema seat it seems twice as long as that. It follows the book quite closely9 so is essentially a travelogue film. To alleviate audience boredom, several 'showcase' scenes are introduced. The first is a balloon flight from London that ends up in Spain, where Cantinflas entertains us by becoming involved in Spanish Dancing and participating in a bullfight. This Researcher felt sorry for the bull.

Other such interludes include Native American dance routines (as well as the Sioux attack that was in the book) and entertainment in a Western Saloon. There is the added excitement of trying to identify the numerous famous film stars who appear in cameo roles throughout the movie. The most notable is probably the pianist in the Western Saloon - the pianist eventually turns round and we see it is Frank Sinatra, who gives the camera a huge, beaming smile.

Nevertheless, the movie collected five Academy Awards, namely: Best Picture, Best Cinematography, Best Adapted Screenplay, Best Editing and Best Music. It was also nominated for Best Art Director, Best Costume Design and Best Director, but was unsuccessful in these categories. It did not trouble the shortlist for any of the acting-related Oscars.

If this movie is ever shown on television, this Researcher will take the more exciting option of watching the moon creeping across the sky for 175 minutes plus advert time.

1Worth millions today.2A town now known as Cobh.3Why Mr Fix???4Jules Verne writes that the reason for this is 'simple' but he explains in detail for the benefit of the reader.5European colonisers approached Asia by travelling East and the Americas by travelling West, so they marked the days accordingly. The International Date Line was formally established in 1884 to avoid land masses.6One reading was sufficient for this Researcher, whereas books like The Count of Monte Cristo reward repeat readings.7Later adaptations include the three-episode television series from 1989 featuring Pierce Brosnan, Eric Idle and Peter Ustinov, and a loosely-related 2004 film starring Steve Coogan and Jackie Chan.8Credited as Inspector Fix.9Although in the film Phileas Fogg does not punch Mr Fix on his release from custody in Liverpool.