Marlene Dietrich - Actress Content from the guide to life, the universe and everything 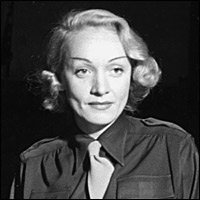 Marlene Dietrich was a German actress who appeared in films during the Golden Age of Hollywood1. Born Maria Magdalene Dietrich, on 27 December, 1901, in an apartment on Sedanstraße in Berlin-Schöneberg, Germany, she was to adopt her stage name in 1912. The name Marlene came from combining her first two names. Dietrich's parents were Wilhelmina Elisabeth Josefine (a descendant of a clockmaker) and Louis Erich Otto Dietrich, an imperial police officer. She also had an older sister called Ottilie Josefine Elisabeth.

I was brought up to be useful and always to do something useful. The biggest misconception of us moderns regarding attractiveness is that one can't look attractive and at the same time clean house, wash dishes and do everything that millions of women worldwide do every day of their lives. Naturally, every housewife can look charming, attractive, tempting, etc. - but why would she want to? In my case? It happens to be my job.
- Marlene Dietrich

Dietrich had an unsettled upbringing as her father had affairs with other women and got demoted through the police force ranks, forcing the family to move houses. Despite this her mother wanted the best education for her daughters and wanted to instil in them high Prussian standards. She sent them to the Augusta Victoria School in Berlin and gave them home tuition and music lessons. However, Dietrich rebelled against the social graces she was supposed to take on and found herself an outsider at school because she was shy. When Dietrich's father died, on 5 August, 1908, her mother went to work for Eduard Von Losch in order to earn money that would allow the family to maintain those standards. Then in August 1914, Germany went to war and Von Losch was enlisted into the army and sent off on active service. He returned home after getting a minor injury then, when recovered, returned to the battlefront. He was sent home again with another injury but on this occasion he got blood poisoning and died. The Dietrich family, who had gone to live in Dessau, soon returned to Berlin where the girls continued their education. Then in 1921 Dietrich's mother decided to send Dietrich to a boarding school in Weimar, Hochschule für Musik, where she could continue her passion for playing the violin.

Her image is very easy to summon up. She has this wonderful distinctive voice, very distinctive face with high cheekbones - and of course those wonderful legs - and she epitomises exotic sexuality.
- Dr Catherine Constable, Senior Lecturer in Film at Sheffield Hallam University.

She didn't stay at the music school for long though, as she felt her real vocation was drama. She auditioned for Max Reinhardt in 1921 but was unsuccessful. Undeterred, she tried for a part in the chorus line of a touring music revue and was accepted. She then returned to Reinhardt the following year and was accepted into his drama school called Max Reinhardt's Deutsche Theaterschule. She soon began receiving small roles on stage and in German films such as Der Kleine Napoleon, Tragodie der Liebe, Die Freudlose Gasse, Manion Lescaut and Madame Wünscht Keine Kinder. During this time she also married Rudolf Emilian Sieber, a casting director. On 13 December, 1924 she gave birth to their daughter Maria Elisabeth Sieber. Although they spent time apart later in their relationship, the couple never divorced.

It's not true that he ran backstage as soon as the performance was over to meet me and sign me up for The Blue Angel right then and there. It is true, however, that from that moment on, von Sternberg had only one idea in his head: to take me away from the stage and make a movie actress out of me, to 'Pygmalionize' me.
- Marlene Dietrich

Then in 1929 an American director called Josef von Sternberg saw Dietrich performing in a Berlin cabaret called Zwei Kravatten. This led to Dietrich playing the role of cabaret singer Lola Lola in The Blue Angel (Der Blaue Engel). The film catapulted Dietrich to fame and featured the memorable song 'Falling in Love Again'.

She has the bearing of a man; the characters she plays love power and wear trousers. Marlene's masculinity appeals to women and her sexuality to men.
- Kenneth Tynan, British theatre critic and writer

Dietrich's appearance in top hat and tuxedo during the film and her dress style in subsequent films led people to question her sexuality. To add to this, she took part in films that were often considered controversial as her characters would have affairs and would kiss both women and men2. One infamous scene in which Dietrich's character kisses a woman takes place in the film Morocco released by Paramount the same year as The Blue Angel (1930).

Affairs of the Heart

Off-screen, Dietrich was linked to both genders as she was reported to have dated Jean Gabin, Edward R Murrow, Yul Brynner, Frank Sinatra, Ona Munson, Mercedes D'Acosta and Joseph P Kennedy. She was also Von Sternberg's mistress, despite the fact that she had a husband and daughter back in Germany while Von Sternberg had a wife. Von Sternberg's wife incidentally tried to sue Dietrich, but was unsuccessful. The couple were inseparable as lovers and work colleagues and in total created seven films including Shanghai Express and Blonde Venus, which were both released in 1932. Dietrich furthered her acting career with Von Sternberg, appearing in The Scarlet Empress and The Devil Is a Woman. However, both films flopped at the box office and the relationship between Von Sternberg and Dietrich also came to an end.

The Germans and I no longer speak the same language.
— Marlene Dietrich

Meanwhile her home country had seen how successful Dietrich was and asked her to return and make films in Germany. Dietrich refused3 and in 1937 applied for American citizenship, which she received on 9 June, 1939. She furthered her involvement with America by partaking in anti-Nazi campaigns and singing for the American soldiers during World War Two based in North Africa and Europe. Two of the songs she sang were 'Falling in Love Again' and 'Lilli Marlene'. 'Lilli Marlene' was originally called 'Das Mädchen unter der Laterne' (German for 'The Girl Under The Lantern') and was well-known and popular among the forces during World War Two. As a result of Dietrich's help in the war, Major General Maxwell D Taylor awarded her the US Medal of Freedom for 'meeting a gruelling schedule of performances under battle conditions...despite risk to her life' and in 1950 the French government awarded her the title 'Chevalier of the French Legion of Honour'.

With regards to her acting career she was called 'box office poison', leading to her being offered very little work. Dietrich was also sick of acting and being typecast so she returned to Europe. Her stay in Europe did not last long however, as she was offered a part that broke the mould. She accepted and returned to Hollywood to appear as a saloon hostess in Destry Rides Again. She also featured in Alfred Hitchcock's film Stage Fright, Touch of Evil by Orson Welles, and later in Judgment at Nuremberg and Paris When It Sizzles. In between these films she spent time travelling America and entertaining people with songs and monologues.

Dietrich decided that she would trade her film career for that of a cabaret singer and recording artist. She appeared all over the world, including parts of the US such as Las Vegas and Broadway. She even made deals with recording companies such as Decca, Columbia and Capitol, who captured her cabaret/stage performances that she made alongside Burt Bacharach. A popular song of hers at this time was 'Sag Mir Wo Die Blumen Sind' ('Where Have All the Flowers Gone?'), which later became the name of a musical devoted to her life.

Over time her health began to deteriorate; her legs weren't what they used to be and her vanity caused her to don a wig, have temporary mini-facelifts and wear body-sculpting undergarments in order to keep her fans happy. She also kept the lights dimmed to help keep her true age hidden. Towards the end of her life, Dietrich made her last stage performance and broke her leg in Sydney, Australia during 1975. She made her last film Just a Gigolo in 1978 and wrote an autobiography entitled Nehmt Nur mein Leben, which was later translated into French and English with the title Marlene Dietrich, My Life. Maximillian Schell's film biography Marlene appeared in 1982 and featured Dietrich's voice.

Dietrich died in her sleep on 6 May, 1992, aged 90 in her Parisian home. Fifteen hundred people attended her funeral in Madeleine Church, Paris, before her body was moved to Cemetery Stubenrauchstraße, Schöneberg on 16 May, 1992 and laid to rest next to her mother's according to her wishes.

1The Golden Age of Hollywood ran from the end of the silent era to the 1950s.2Similarly, pop diva Madonna has dressed like a man, kissed both genders and been seen as controversial.3Dietrich's refusal to support her native country led to another German actress called Zarah Leander doing well in the Nazi film business.