Black Horse Westerns and Their Readers Content from the guide to life, the universe and everything 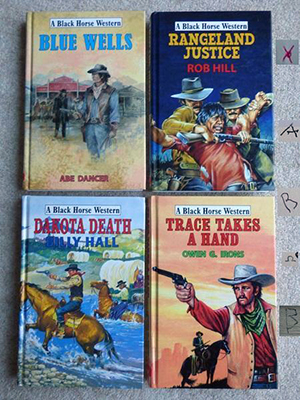 Why do we (older generation males in the UK) read Black Horse Westerns? Is it because there is an abundance of them in local libraries and they are easy and relaxing to read? Or is it because they remind us of our early years watching Western films at the cinema every week, where there was little or no blood and gore, and justice was seen to be done with good always prevailing over bad? These are difficult questions with no easy answers.

Robert Hale Ltd (a London printing company) published their first Western novel in 1936 and have continued to publish Westerns since then. Since the 1980s these books have been released under the 'Black Horse Western' logo. In 2015 Robert Hale Ltd became part of The Crowood Press, which has declared its commitment to continue publishing Black Horse Westerns.

Typical Black Horse Western books range from 35,000 to 45,000 words in length, with the publisher preferring the smaller end of the scale. The Crowood Press invites would-be authors to submit draft novels for publication via their website.

The Black Horse Westerns tend to follow set patterns, with a common one having the following main characters:

The goodie has a confrontation with the baddie and the goodie wins, fortunately with no damage to his hands that might affect his lightning draw. Quite often one of the characters is knocked unconscious by the butt-end of a gun, a blow which never causes more harm than a slight headache - fractured skulls do not exist in Black Horse Westerns.

The goodie then refuses to work for the villain and they become enemies. The goodie bravely intrudes into the villain's business then gets captured, bound hand and foot, and left to contemplate his forthcoming doom. Miraculously and improbably he escapes only to find that the woman has been kidnapped in response. Alone, or sometimes with help, he battles the baddie and the gunslingers, disposes of the villain and saves the woman. The last half page of the book is devoted to our hero, tired of all the danger and excitement, deciding to settle down to a happy future with the woman.

There are many Black Horse Westerns of the hardback variety and they all have front covers featuring colourful and high quality portrait artistry with Western background scenery. Some of the people depicted resemble Western film stars such as Clint Eastwood, James Stewart or Lee Van Cleef. There is a short synopsis of the story on the back cover. Readers have developed innovative ways of subtly marking the books they have read after borrowing them from a library, as it is hard to tell from the covers alone. The cleverest mark the book at the top1 so they don't have to open it to look for their mark. Occasionally an unmarked book is borrowed only for the reader to realise after five or so pages that it has been read before and is a duplicate copy. In these instances it is surprising to find that one cannot remember how the story reaches its conclusion.

So why do we read Black Horse Westerns? This Researcher is searching for a novel that breaks the mould, with a goodie we can admire and who doesn't get captured.

There are other prodigious Western authors, but even in their work set patterns and styles do creep in.

The best example of the hero we are looking for occurred in the 'Mountain Man' series of novels by the late William W Johnstone. The hero (Kirby 'Smoke' Jensen) is the fastest and most accurate gunfighter in the West. He never gets captured. He can stalk enemies silently, set up booby traps, and wipe out dozens of extremely bad baddies in each book. There is more description of blood and gore, but the bad men are so evil they deserve to be wiped out to our complete satisfaction. Having devoured this set of novels, it is back to the Black Horse Westerns, where good always prevails, in the hope of finding more stories that surprise and excite.

Perhaps the only way to achieve this is to write and submit an exciting and innovative story oneself. The first step is to scour the telephone directory or road map atlas to find a suitable name for the hero, who is so fast his guns appear in his hands like magic. 'Preston Brook' leaps out as a candidate. It will be a dry and hot day as he rides on a bay horse into the small town of 'Barton'. He is very hungry so he will stop off at the town restaurant first.

Now to the computer, and in due course fellow Black Horse Western readers will hopefully find what we are looking for.

1Next to the librarian's mark confirming that the book has been added to the Library Catalogue.