Spaghetti Westerns - The 'Dollars' Trilogy Content from the guide to life, the universe and everything 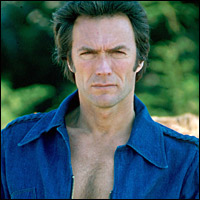 In 1964, a small bunch of Italians, led by newcomer director Sergio Leone, set out to make a small western with up-and-coming American actor Clint Eastwood, co-star of the television series Rawhide. Filmed in the Almería region of Spain, the film was a budget recoup, using the same sets and costumes as the glossier film Bullets Don't Argue (1964) and it was never intended for international distribution. Who could guess that this tiny film would spark off an entire new sub-genre, spawn two sequels and a thousand imitators, and propel both its director and its star to Hollywood?

A Comparison of Yojimbo, A Fistful of Dollars and Last Man StandingHeavily influenced by Kurosawa's Yojimbo1, this is the story of Joe (Clint Eastwood), an enigmatic gunslinger who rides into a town called San Miguel. There is a war going on between two groups of smugglers - the American Baxter family and the Mexican Rohos — over who controls the town. Joe signs up with the Rohos, but what seems to be a straightforward alliance swiftly turns into a game of cross and double-cross. Just who is the mysterious gringo2 really working for? Or is he playing each side against the other for his own profit?

This can be thought of as the first true spaghetti western. Despite the fact that about 25 westerns had been made in Italy before, they had been pale imitations of American westerns which failed to see release outside Italy. A Fistful of Dollars was clearly something new, and it has many of the features of the typical spaghetti western — the violence; the cynical, mercenary antihero; and the stunning mix of long shots and extreme close-ups.

It also featured music by another cinematic newcomer, Ennio Morricone, who would create the distinctive musical style of the spaghetti western. Never before or since has a film's musical style been tied so closely to its genre.

The notorious bandit El Indio has escaped from jail. The bounty killer Manco (Clint Eastwood) sets out after him to claim the price on his head, but finds himself at odds with fellow bounty hunter Colonel Mortimer (Lee Van Cleef). With Indio planning a bank robbery, can these two sort out their differences before they are both uncovered and destroyed at the hands of El Indio's gang?

This film is notable as the first big starring role for Lee Van Cleef, a man who'd had extra work on the fringes of Hollywood westerns for years without attracting anyone's attention. He would go on to become a spaghetti staple — Leone would cast him as the bad guy, Angel Eyes, in his next film, and Cleef would go on to star in such well regarded spaghettis as The Big Gundown (1966), Death Rides a Horse (1967) and the Sabata series (1969 - 71).

Three gunslingers — Blondie, the Good (Clint Eastwood); Angel Eyes, the Bad (Lee Van Cleef); and Tuco, the Ugly (Eli Wallach) — learn that $10,000 is buried in a grave — but none of them knows both the name on the grave and the name of the graveyard. They are forced into an uneasy alliance, culminating in a tense three-way shootout as each tries to take the $10,000 for himself.

Perhaps the most famous part of this film is its theme tune. The 'whistle and wah' theme, based on the howl of the coyote, is one of Ennio Morricone's most recognisable works.

This was the last film in the Dollars trilogy. There was a plan to reunite the three actors for a cameo role in the opening of Sergio Leone's next film, Once Upon a Time in the West (1968), but this fell through after Clint Eastwood turned down the idea.

Joe 'Blondie' Manco - a man with no name?

Clint Eastwood's character, the squinting, cigar smoking, poncho-wearing antihero, is popularly referred to as the Man with No Name. However, this title was solely dreamed up for the American advertising campaign, and is never mentioned in any of the films. Clint Eastwood's character has a different name in every film, and hints about his real name or his past are incredibly scarce. The mystery is part of the character's appeal.

Although the films above are presented in the order they were made, many people think The Good, the Bad and the Ugly comes first, since this is the film in which Blondie first picks up the poncho he'll wear in the other two films. However, it seems unlikely that Leone had any intention other than dramatic effect. The films stand alone and can be watched in any order, but the increase in quality between them is noticeable as the budget expanded and foreign backing increased with each success.

1So much so that Leone had to pay Kurosawa a heavy fine when A Fistful of Dollars gained an international release.2A Spanish word for an English-speaking foreigner.