Spanish Customs Content from the guide to life, the universe and everything 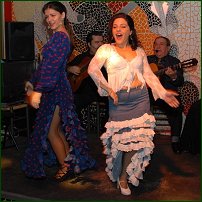 Spain is a beautiful country, rich in history and tradition. Should you get a hankering to see this for yourself, the following information may be helpful in planning that trip before hopping aboard a plane, train or automobile.

Flamenco, the dance most closely associated with Spain, originated in Andalusia in the south of the country. You are most likely to witness it being performed there, rather than in northern Spain. When Flamenco first came into being, it was an unaccompanied song. Different influences on the dance meant that guitar-playing, hand-clapping and the well-known foot-stomping were added later as the dance evolved.

Flamenco is a very passionate dance and it is well worth going to see, as long as it is performed properly: unfortunately, a lot of performances aimed at the tourist market do not catch the full beauty and passion of the dance.

It is thought by some that the dance is based on a bullfight, with the woman as the bull and the man as the matador, he trying to tame her and bend her to his will. This is probably based on no more than exotic fantasy, since the true history of the dance is unclear.

If you are a person who firmly believes in 'why stand when you can sit?' and 'why sit when you can lie down?' then the siesta will, quite possibly, be your favourite Spanish custom.

The word siesta derives from the Latin sexta, as in hora sexta or 'sixth hour'. A siesta is a short afternoon nap generally taken after 2pm and following lunch, the main meal of the day for most Spaniards. The period of siesta itself is usually about two hours long and most people will take a short nap of about 30 minutes during this time.

No, not the car - this fiesta is a big celebration which all villages and towns in Spain will stage at some point. They may be national, regional or just local, so not all fiestas will generate a national holiday (and with the amount of fiestas Spain has this is a good thing: otherwise, the country would be permanently on holiday!). If you get the chance to go to a fiesta, then do go, as it has a fun, friendly, atmosphere that should not be missed.

Because religion is very important in Spain, every town and most villages has its own patron saint to whom the people pay homage and for whom they throw what we would consider a huge party on their saint's day. For example, Fiesta de San Isidro is celebrated in Madrid on 15 May, and Seville celebrates Corpus Christi in late May or early June.

One saint's fiesta you may have heard of involves the running of the bulls in Pamplona. This is held to honour St Fermin and is staged every year from 7 to 14 July. People come from all over the world to take part, but be warned: it is very dangerous. On 7 July, everyone lines up at the starting point and sings a song to the saint:

A San Fermín pedimos, por ser nuestro patrón, nos guíe en el encierro dándonos su bendición.
(We ask St Fermin, as our patron, to guide us through the bull run and give us his blessing.)

First, some fighting bulls are released. Then, the people ahead of the bulls are allowed to start running. The object is for them to run in front of the bulls until they reach the bullring which is situated about half a mile down the narrow street. The participants run the risk of being gored by the bulls' horns and, just to make things more interesting, the people taking part traditionally wear all white with some sort of red scarf wrapped around either the neck or the waist.

A fiesta that is a bit safer is La Tomatina, celebrated in the town of Buñol. This is a week-long celebration that involves many a tomato being hurled at whoever might find themselves within range. This fiesta was started in the 1940s, though it is not known whether the first tomatoes were thrown at officials or just random passers-by. Either way, having seen how much fun the hurlers were having, more people joined in the festivities. This is a messy but very enjoyable celebration in which to participate.

Dia De San Anton, the Day of Saint Anthony, is celebrated on 17 January. Saint Anthony is the patron saint of four-footed beasts. On this day farmers and villagers dress up their animals with flowers and bells and take them to a church dedicated to the saint, where the priest will bless the animals against sickness and accidents over the coming year.

Semana Santa is a week-long celebration in Spain and most Hispanic countries, celebrating the events of Easter week. The celebration is broken down into five key days: Palm Sunday, when Jesus first arrived in Jerusalem; Holy Thursday, the day of the Last Supper; Good Friday; Holy Saturday, when Mary went to visit Jesus at the site of his crucifixion; and Easter Sunday.

Semana Santa involves processions showing the various stages of the Passion of Christ. Between Thursday midnight and Friday morning, known as the Madrugada, the processions continue all night long.

There are three major dates that are celebrated around Christmas in Spain. The first is Nochebuena or Christmas Eve. Traditionally, the whole family will get together for a meal. The children will receive a small gift and the adults will exchange presents. Most families will go to mass at midnight, though some stay at home and raise a drink to the birth of Christ instead.

Christmas Day is a fiesta day. All the shops and banks are closed. This is the sort of day when everyone will spend time with their family in quiet celebration.

Los Reyes, Three Kings Day, celebrates the arrival of the three kings in Bethlehem. Traditionally, they do not have Father Christmas in Spain and the three kings deliver the presents instead. Therefore, 6 January is the day on which the children receive their gifts. They even write to the three kings with requests. There is usually a big procession on the night of 5 January, in which floats travel through the town throwing out sweets and goodies to the children.

New Year's Eve will see most towns celebrating with street parties. It is traditional to wear red underwear that has been bought (though, hopefully, not worn) by someone else. At midnight, it is a tradition to eat 12 grapes, one for each stroke of the clock, to bring luck for the new year. This is, apparently, quite hard to do, so some people buy seedless grapes which they peel beforehand. Tins containing 12 seedless and peeled grapes are available for purchase, if you'd rather not go to the trouble of peeling grapes yourself.

The first bullfight took place as a celebration for the coronation of King Alfonso VIII in 711. At first, only the aristocracy took part and the fights were performed on horseback. However, King Felipe V did not think that the sight of such genteel folk participating in this barbaric sport was a good example to set to the general public (peasants) and so banned the aristocracy from taking part.

All was not lost, though, as the general public quite liked the sport and adopted it as their own. Since the masses could not afford horses, the sport was adapted so that the bulls had to be dodged on foot.

It is not a sport for everyone. The bull is usually weakened by having spears strategically stuck into the back of the neck area by the picadors to make the bull bleed. This lasts for about ten minutes. Later, the matador performs his dance, called the faena, with the bull. This requires a great deal of skill. The matador uses a muleta, which is a thick piece of cloth draped over a sword, to get the bull to charge at him. Quickly and artfully he will attempt to sidestep the bull and stay away from its dangerous horns. This is not a sport for the faint of heart and the show will usually end with the death of the bull, although on some occasions an exceptionally brave bull will be spared.

Before the wedding and making their vows the groom will present his bride with 13 gold coins representing Christ and his 12 apostles. The bride will then carry these in a little bag to the wedding ceremony.

It was traditional in Spain for the bride to wear a black silk dress with a lace veil. Nowadays, though, the bride tends to go for the popular white bridal gown. The groom will wear a shirt that has been especially embroidered by his future wife. Not only will the bride be accompanied down the aisle by her father, the groom will also be accompanied by his mother.

During the ceremony, you might see El Lazo, the lasso. This is a beautiful crucifix that is wrapped around the wrists of the couple. The couple will wear this throughout the ceremony. It represents their love and how it binds the couple together. After the wedding, the bride keeps El Lazo as a memento of the day.