The Running of the Bulls, Pamplona, Spain Content from the guide to life, the universe and everything 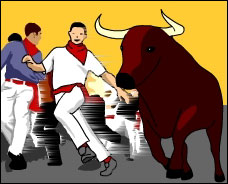 Essentially what happens is that six bulls destined for the corridas ('bullfight') and two herds of tame cattle are released from a corral (encierrillo) and then promptly chase a group of people who are brave enough to run the gauntlet. The whole purpose of the bull run is to get the bulls in to the plaza de toros (bullring) where they will be used in a corrida - the central celebration of the festival. The run is 800m long and the combined weight of the six angry corrida bulls is roughly 3600 kilos or 720 stone. That's one hell of a lot of angry beef to get trampled under...

Bull running is not unique to Pamplona - there are other, less famous and less spectacular events in other Spanish cities. What has evolved in Pamplona is the beef equivalent of dressing mutton as lamb - making a particularly popular event from what is, in essence, a very mundane task - cattle droving.

The Festival of San Fermín has been celebrated for centuries, but it was in the early 1800s that things started to change. At this time, the responsibility of the caring of the bulls fell to the Butchers' Guilds who were key to the success of the festival. Cattle droving can take hours, so to speed the process up, they joined the drovers in herding the cattle. It was only a short leap to realise that the bulls moved a lot faster when there was a fat butcher in front of them taunting them mercilessly. The droving then became the run which in turn became as popular as the corridas themselves.

When the present-day bullring was built in 1852, the route (see below) was shortened and the festival, with a brand spanking new plaza de toros, gathered a new momentum. It was at this point that the encierrillo was established in its current location. Little has changed since this time. The most notable difference is the number of spectators - the runs attract worldwide attention from tourists, TV viewers and animal rights activists and are broadcast to millions of TV spectators who watch in the hope of a little bit of blood.

The running of the bulls, as mentioned above, begins at 8am every morning of the festival and if you want to participate, you are advised to get to the starting point at Santo Domingo by 7.30am. Those who participate in the run are invariably one or more of the following:

Whatever the provenance or religion of the participants, everyone who takes part learns the chant of San Fermín and repeats it in the hope that they will be protected during the three-minute run. So here it is:

We ask San Fermín, as our Patron, to guide us through the run and give us his blessing.

Having prayed to San Fermín, it is now time to put your head between your legs and kiss your butt goodbye as this is when the first of four rockets (see below) is set off - signalling the start of the race. The runners get a 50m head start - which is pretty miserable considering you've got six 120 stone bulls hot on your heels.

The Three Rs of the Run

When you're running like the clappers, it might be worth mugging up on the route you are expected to follow. Although the way is effectively sealed off, there are exit points for those who want to duck out. The route is:

The run is punctuated by four rocket signals. It is vital that you memorise these as they tell you - runner or spectator - where the bulls are, thus letting you know whether or not it is safe for you to come out of hiding.

There are many rules governing the running of the bulls, most of them are plain common sense and the rest apply to people living in the town (ie, don't leave your front door open as there have been wayward cattle in the past). Below are the ones for participants/spectators to bear in mind:

It is obvious that the running of the bulls is a dangerous activity, and between 1924 and 1997 14 people have, quite literally, been trampled underfoot and gored. Below are three of the most famous incidents of fatalities during the 20th Century.

Sanfermin.com has a complete video library of the 2001 runs. You'll be amazed at just how many people there are, how narrow the streets are, and how mad the whole thing truly is.

1The week is marked by all night drinking every night of the festival.