Blue Eyes Content from the guide to life, the universe and everything 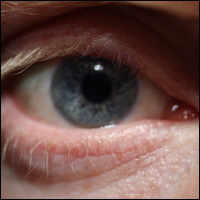 Somewhere between 6,000 and 10,000 years ago, a man lived somewhere near the Black Sea. This man was unusual and was probably treated with suspicion or outright distrust by the people around him. For as long as anyone could remember, everyone had eyes to match the soil. Brown eyes. But this man had a strange defect - he had eyes which suited the sky. 'Old Blue Eyes', or more appropriately, '(Very) Old Blue Eyes' must have been popular though. He had children, probably many children, and in the blink of the evolutionary eye, there's you and me and Frank Sinatra and half of Europe with blue eyes.

Blue eyes are nearly exclusive to Europeans and Caucasians. They are caused by a gene mutation which creates a lower level of production of the substance melanin. The gene producing the blue eye phenotype is recessive, meaning that the trait is only likely to appear in an offspring if both parents share the same gene. Why blue eyes exploded across Europe thousands of years ago remains something of a mystery, but an anthropologist working at the University of Wisconsin-Madison named John Hawks suggested that people with blue eyes have a historical 5% advantage in reproducing (a boon, no doubt, to blue-eyed romantics worldwide). The simplest explanation for this is that blue-eyed humans are more sexually attractive, though that is difficult to prove scientifically1.

In fact, many people consider blue eyes, or at least lighter coloured eyes, to be the most beautiful eye colour. It is certainly an unusual colour in the human body, which is so often just a mixture of browns, tans, whites, reds and blacks. A splash of blue draws attention like a distant lighthouse, or the colourless circle in Kandinsky's 'White Dot' painting. Upon closer inspection, most blue eyes are not uniformly so. Peering into the some blue eyes, one can detect rivers of green and slivers of brown like leaves and weeds clogging a spinning drain. Others have rays of grey and seeds of yellow. No two blue eyes are ever quite the same. Some are light, others dark. Some are bright like the crest of youth, and some sparkle wisely like the twilight sky. Some are fogged steel. Some are denim; maybe a distant galaxy, a muddy puddle or the icy curve of a snowball. Some are window cleaner and some are jazz. Like all eyes, they have a black pupil at the centre, where light cannot escape, providing the contrast which can make them so striking.

Some people associate blue eyes with innocence or naivete. Perhaps this is because almost all newborn babies have blue eyes, due to a lack of melanin at birth. When light pours into a baby's eyes, it stimulates the production of melanin, and the eyes tend to change colour; they settle on their eventual colour within about three years. Adding a 'full-circle' dimension to the blue eye, many peoples' eyes become blue as they age, thus starting and ending their lives with blue eyes.

Many people believe that the blue eye is becoming increasingly endangered, and its beauty has actually been invoked by proponents of 'race hygiene' and opponents of immigration as an example of what can be lost in race mixing. It is true that because blue eyes are recessive, the increased reproduction in between ethnic groups is decreasing the number of people in the world with blue eyes. This trend has been ongoing for some time, and it is possible that someday there will be no more blue eyes in the world. Before that, though, there will be one last blue-eyed survivor, and if the circumstance of '(Very) Old Blue Eyes' is any indication, he will be a very popular man.