Lord of the Rings: Downs, Barrows and Wights Content from the guide to life, the universe and everything 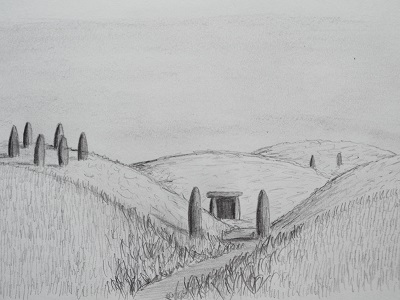 Tolkien's masterpiece The Lord of the Rings started out as a simple story in which four hobbits went on a journey and had a series of adventures. This episodic style continues all the way to the end of the first volume.

One such adventure was the hobbits' trip across the Barrow-downs and their imprisonment by an evil creature called a Barrow-wight. Because this had no connection with anything that happened before or after it, it was a prime candidate for being left out when the book was filmed. Both Bakshi and Jackson omitted the whole Barrow-downs chapter from their films. As a result it is not familiar to many lovers of the movies who have not read the books.

The word 'down' means a grassy hill. There are many groups of such hills in England, for example the South Downs in Hampshire and Sussex or the Berkshire Downs to the west of London. Watership Down in Hampshire was made famous by a best-selling adventure story about rabbits.

A 'barrow' is a man-made mound raised above a grave of some sort. Such artificial mounds may date from the New Stone Age ('Neolithic') or Bronze Age.

The grassiness of the downs is a man-made feature, caused by first felling any trees there and then constantly grazing sheep. The sheep eat the grass, but the grass continues to thrive since it grows from the base of its leaf and is not damaged by the sheep shearing off the top of the leaf. Other plants will die if a sheep eats all their leaves, so eventually there is grass everywhere.

Tolkien's world had a number of different downs, clustered around the town of Bree, the original hobbit settlement in the west of the world. The North and South Downs were north and south of Bree. The Barrow-downs were southwest of Bree, between it and the Old Forest. They were effectively part of the South Downs, but separated from it by a narrow gorge known as the Andrath, literally 'long street'. The men of Arnor built a major road through this gorge which in later years was known as the Greenway. So the South Downs were to the east of the Greenway while the Barrow-downs were to the west.

The Barrow-downs were quite high and could be seen from the borders of the Old Forest, towering above the trees. The tops of the Downs had many barrows and there were also stone circles, isolated standing stones and ancient earth-banks.

What Happened on the Barrow-downs

For those of you who have seen the films but have not read the book, a quick summary of the events at the Barrow-downs is in order.

The hobbits Frodo, Sam, Merry and Pippin were travelling east to Bree, pursued by the evil Black Riders. To disguise their absence from the Shire and in an attempt to avoid the Black Riders, they went through the Old Forest, where they were helped by a strange forest sprite called Tom Bombadil. The exact nature of Bombadil is one of the most hotly debated topics in the Tolkien world, but not really relevant to this discussion. The only important things to know about him are that he was friendly towards the hobbits, had some power to combat evil creatures and was immensely old. Bombadil claimed to have been around before the first raindrop and before the first acorn. He remembered a time when the starlit night was not yet sullied by evil things.

The hobbits stayed two nights in Tom's house at the edge of the Old Forest, where he told them many stories. Among these, he talked of the Barrow-downs, which had been inhabited by men and sheep long ago. They built their fortresses there, and their graves were full of gold and covered in mounds. They fought each other and eventually died out leaving only the sheep, but soon even those wandered off or died leaving the hills empty1. The graves became inhabited by evil Barrow-wights who 'walked in the hollow places with a clink of rings on cold fingers, and gold chains in the wind.'

From Bombadil's house, the hobbits travelled up onto the Downs. They were warned to keep well away from any barrows they found, and if possible to pass them on the west side2. Stopping for lunch in the grassy countryside, the sunshine made them drowsy and they dropped off to sleep.

When they woke, it was sunset and a fog had descended. They tried to go on but got confused and panicked. Frodo found himself riding between two tall standing stones which he had not noticed earlier and became separated from the others. He felt himself overcome by weakness and collapsed to the ground. As he lost consciousness, he saw a tall, shadowy figure with cold, glowing eyes bending over him.

When Frodo came to, he was inside one of the barrows, which had a stone-lined passage and was lit by an eerie glow. The other three hobbits were there too and were still unconscious. All four had been dressed in strange white robes. The three unconscious hobbits were laid out side by side like corpses in a grave, bedecked with gold, with swords at their sides and with a single giant sword across their three necks.

The Barrow-wight arrived, singing a song of death and despair. Frodo saw his arm coming around a corner of the passage, walking on the fingers of its hand like 'Thing' in The Addams Family. The hand was heading for the hilt of the giant sword. Frodo grabbed a short sword and chopped off the hand. The Barrow-wight retreated with a shriek and the eerie light went out.

Then Frodo recited a chant, a magic one that was taught to him by Tom Bombadil. Tom arrived a few moments later and rescued them from the barrow. He then cast a spell which drove the wight out of the barrow. He laid out the treasures from the grave in the sun for passers-by to claim. This, he said, would prevent other wights from moving into the barrow. He himself chose a jewelled brooch for his own wife, Goldberry, remembering a woman who had worn it long ago. The hobbits took long daggers from the barrow which suited them as swords and which Aragorn later identified as 'blades of Westernesse'.

The History of the Barrow-downs

In one of the appendices to The Lord of the Rings, and also in unpublished notes, Tolkien uses the Elvish term Tyrn Gorthad for the Barrow-downs. This probably means either 'Hills of the Barrows' or 'Hills of the Wights'. He says that the hills were first inhabited during the First Age, when men3 awoke in the East and travelled west. It was at this time that the barrows, the standing stones and the stone circles were made.

Thousands of years later, at the end of the Second Age, Elendil and his family arrived, fleeing from the destruction of the island of Númenor, also known as Westernesse. They made the new kingdom of Arnor in the northwest, along with the kingdom of Gondor in the south. The Barrow-downs were in the centre of Arnor. The men of Arnor revered the ancient graves because they were the tombs of their own ancestors.

As the world moved into the Third Age and the centuries progressed, Arnor split up into three smaller kingdoms: the Barrow-downs were in the kingdom of Cardolan. Because the hills were easy to defend, the rulers of Cardolan made their capital there in the last years of the kingdom, but were defeated in a war against the evil kingdom of Angmar, directed by the Witch-king from his capital in Carn Dûm. After Cardolan was destroyed, the Witch-king sent evil spirits, the Barrow-wights, to live in the hills and defend them from intruders.

The appendix also mentions a story told by some: that the barrow in which the hobbits were held captive was in fact the grave of the last prince of Cardolan. Whoever he was, some memory of him still survived in the place and he had clearly been killed in one of the final battles of the kingdom. One of the first things Merry said when he woke was 'The men of Carn Dûm came on us at night, and we were worsted'.

The word 'barrow' is from the Old English 'beorg', meaning a hill or mountain and related to the German 'berg'. The letter g on the end of Old English words was often softened and later disappeared. So a barrow originally meant a mound and only later came to mean an artificial mound containing a grave.

The creature that Tolkien describes - an evil, human-like creature with a physical body, living in a grave and guarding the treasure there - comes from Norse mythology. It was known in Old Norse as a 'draug' or 'draugr', plural 'draugar'. This was translated into English as 'barrow-wight' in Eiríkr Magnússon and William Morris's translation of the Icelandic Grettis Saga in 1869. Tolkien was very familiar with the work of William Morris so it is likely that he heard the English term from that work. Magnússon and Morris's choice of 'wight', a modernisation of the Old English word 'wiht', is odd because 'wiht' meant 'living being, creature, thing' - it had no negative connotations.

In North European folklore, the draugar were the re-animated bodies that had been buried in the graves, but Tolkien's Barrow-wights seem to be different. They certainly appear to have bodies, because Frodo is able to cut off the wight's hand. But they were 'evil spirits sent by the Witch-king to inhabit the mounds', not the original bodies of the men of Westernesse who were buried there. It's possible of course that the evil spirits inhabited and re-animated the original bodies. We're told nothing more about exactly what they were.

Where to Find the Barrow-downs in Real Life

There's no doubt that the landscape of the Shire was inspired by Tolkien's own memories of the countryside of his childhood. So are the Barrow-downs inspired by any particular location that Tolkien knew about? Is there any place like them in the real world? We present a few spots which will give a feel for the story:

1In real life, without the sheep, the downs would gradually change back to scrubland with small trees such as hazel. Tolkien wasn't an ecologist.2They were travelling north, so this means they would travel around the barrows in a clockwise direction. Walking anticlockwise around a church or grave is a traditional way of summoning evil things.3Tolkien used the term 'men' for the race of mortal humans, both male and female, to distinguish them from the immortal Elves.4The term 'barrow' has a more particular use in Ireland - it refers to a Bronze Age mound covering a kyst burial. The graves in Loughcrew and the one described in 'The Lord of the Rings' are known as 'passage tombs'.