Irish Neolithic Tombs Content from the guide to life, the universe and everything 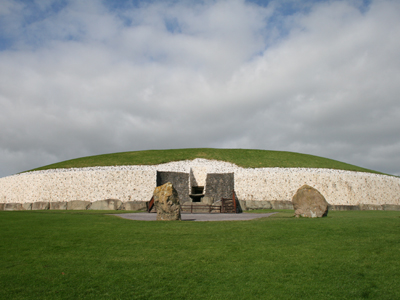 Ireland is littered with ancient stone monuments; from castles dating back a few hundred years to tombs dating back five thousand years. This entry deals with the ancient tombs, of which there are the remains of more than 1,300 throughout the island.

Thousands of years ago, Ireland was sparsely populated by a hunter-gatherer community. In about 4000 BC, the Neolithic Farming Revolution arrived in Ireland, bringing a farming lifestyle to the country. It is not known how much of this was new people arriving and how much was the native people changing their way of life; there's no doubt that the farm animals were brought to Ireland from abroad in boats, so communication and trade with other countries was obviously taking place. However it happened, Ireland developed into a farming country with settled communities. This period was called the Neolithic or New Stone Age. It lasted from about 4000 BC to about 2000 BC. During that period, these farmers set about clearing Ireland's primeval forest and converting it to farming land.

The Stone Age people did not build houses of stone; they lived in wooden huts with thatched rooves. Stone was used for their tools: axes, knives and ploughshares. Initially, flint, which cracks to form a very sharp edge, was used but later a polished black stone called porcellanite was used instead. Though not as sharp, it wore better.

Despite living in wooden huts, these early people buried their dead in elaborate stone tombs. The existence of these tombs tells us a few things:

The Basic Design of a Neolithic Period Tomb

All the tombs and other later constructions such as stone circles in this entry can be described as 'Megalithic' (Greek: 'Mega' - big, 'Lithos' - stone). The basic tomb has three features:

There were four basic types of tomb that were used at different times in varying parts of Ireland. Some of these are also found in other parts of Europe, such as Great Britain and Brittany.

The earliest type of stone tomb found in Ireland is the court tomb, built mainly between 4000 and 3500 BC. There are more than 400 found almost entirely in the northern half of the country, being particularly common around Sligo.

The tomb itself consists of a number of square or rectangular chambers in a line, each made from flat stones standing upright (orthostats) and other flat stones across the top. A mound is then constructed over the whole tomb, usually about 25m long and about 15m wide. The line of the tomb is from west to east and the doorway into the tomb faces east. The court tomb has a flat semi-circular area in front of the doorway known as a 'court'. The court is paved with stone and surrounded by standing stones. Presumably the court was used for rituals during the funeral.

Most court tombs in existence have been damaged over the years so that the mound has disappeared and the roof stones removed, leaving only the side stones. A good example of a court tomb, which has been partially reconstructed, can be seen at Creevykeel, County Sligo.

Portal tombs appear to have developed from court tombs. They are so-called because of the prominence of the doorway. As well as other vertical stones, they have two very large stones forming the doorway and an enormous stone, which not only covers the doorway but also covers the whole tomb. This 'capstone' can be anything from 20 to 90 tonnes in weight and slopes with its highest point at the doorway. Portal tombs are not and were never covered in a mound but stand with the stones exposed.

There are about 180 portal tombs, usually built on low-lying ground, scattered around Ireland, mainly in Ulster but with small concentrations in South Dublin and Waterford.

A very good example of a portal tomb is the Proleek Dolmen. Situated in the Cooley peninsula to the northeast of Dundalk, it is well sign-posted and easily reached through the grounds of Ballymascanlon Hotel. This dolmen has a capstone estimated at 30 tonnes in weight. 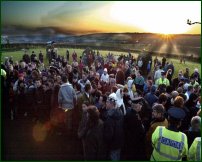 Passage tombs or passage graves were built in the period from 3500 to 3000 BC. There are about 240. Unlike other tombs which are isolated, passage tombs tend to be built in 'cemeteries', that is, collections of a large number of such tombs. The most significant of these cemeteries are in County Meath at Brú na Bóinne and Loughcrew, and in Sligo at Carrowkeel and Creevykeel.

Passage tombs are a development of court tombs: the chamber is large and often cross-shaped, with a narrow stone-lined passage leading to it. The mound is circular and can be enormous. The biggest of these is more than 80m in diameter. Newgrange at Brú na Bóinne in County Meath is the best example of a passage tomb and is open to the public. Excavations around Newgrange show that originally the front of the mound was faced with white stones. All the way around the base of the mound was a ring of large stones covered in engravings. There are also engravings inside the passage and chamber. However, these are the only Neolithic tombs to show any sort of engravings. The patterns are abstract ones - spirals, diamonds and zigzags, although it has been speculated that some of them represent the phases of the moon.

While the court tombs always faced east, the passages of the passage tombs point in many different directions. Many were built to align with the sun so that the sun's rays could shine down the passage on a significant date: for example, passages facing southeast catch the rays at sunrise on the winter solstice, as happens in Newgrange. Passages facing west were aligned with the setting sun at the equinox. Some of the bigger mounds might have had two separate passages, each aligned to a different solar event.

In smaller tombs, the roof of the chamber was made from flat slabs of rock placed directly on the side walls. For larger chambers of the bigger tombs such as Newgrange, this was not possible as the span is too wide. A different technique called 'corbelling' was used. A first layer of slabs rested on the walls and projected a short way, the next layer projected further, and so on until the final slab covered the hole in the centre. This gave the chamber a crude domed shape.

Passage tombs were usually built on the tops of mountains so that they could be seen from a long way off. The 'Fairy Castle' cairn on the top of Two Rock Mountain just south of Dublin, for example, can be seen 40 or 50 miles away (about 60 or 80km).

The Wedge Tomb is the smallest and latest of the tomb types. These were built at the very end of the Neolithic Age from about 2500 to 2000 BC. There are more than 500. About quarter of all wedge tombs are in County Clare, another quarter in Southwest Ireland, and the remaining half are scattered mainly around the west and northwest of the country.

Here the chamber has become just a box. The passage widens to the doorway, in the wedge shape that gives the tomb its name. The whole thing is capped with flat stones and covered in a very small mound, sometimes only one metre high. Nowadays, the mound has been eroded away, leaving only the box-like stones of the tomb. Wedge tombs are usually built about three-quarters the way up a mountain, and the doorway nearly always faces southwest.

A good example of a wedge tomb can be found at Lough Gur, a wonderful site in County Limerick with many ancient remains, including the Great Stone Circle, the biggest in Ireland. Follow the signs from Limerick to Lough Gur, as far as the car park. Turn left out of the car park, bear right, turning right again at the next crossing. The tomb is signposted on your left. If you get as far as the new church, then you've gone too far. The tomb was built in about 2500 BC and is about 8m by 3.5m. The burial 'gallery' is divided into two chambers. Originally, it would have had a mound over it. Archaeological excavation has revealed the remains of at least eight adults and four children buried in it.

Around 2000 BC, bronze goods started arriving into Ireland. This was the beginning of the Bronze Age. There was a gradual shift to a new form of society with different customs. This might or might not have been caused by the arrival of the new technology and the whole culture required to mine the copper and refine it. Burial customs changed with the end of large tomb building and the start of smaller stone-lined graves called 'cists'.

The Bronze Age people specialised in another type of large stone monument, unconnected with tombs: the stone circle. But that's another story!