The Neolithic Passage Tombs of Bru na Boinne Content from the guide to life, the universe and everything 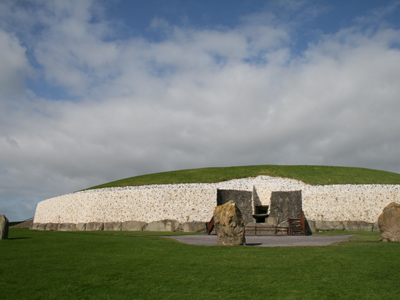 The passage tombs of Newgrange, Knowth and Dowth stand in the area known as Brú na Bóinne, in a loop of the River Boyne, a few miles west of Drogheda, County Meath, Ireland. While from a distance they look like round, grass-covered hills, they were in fact constructed in about 3200 BC as tombs. All three mounds, or cairns, are made from small stones layered with soil. They contain rock-lined passages with burial chambers known as 'passage graves'.

There are also 37 other much smaller passage tombs in the same area and many standing stones.

The area has been declared a World Heritage Site by UNESCO1.

Newgrange is the best known of the three passage tombs. It is about 80m in diameter. Around the base, set into the cairn are large stones known as kerbstones. Some of these are elaborately carved. Inside the mound is a passageway lined with roughly-hewn stone slabs, which leads to a cross-shaped chamber.

The entrance to the passage is a simple doorway formed by two upright slabs and a horizontal lintel. Above the doorway is a hole known as the roofbox. The passageway has an amazing feature: although built from roughly-hewn rock, it is aligned in such a way that the rising sun shines through the roofbox, down the passageway, and lights up the central chamber on the morning of the Winter Solstice (21 or 22 December). This amazing fact was only discovered during the 19th Century and verified scientifically around 1960. While initially dismissed as coincidence, it is now generally accepted that the mound was designed with this in mind. It shows that the people of 5,000 years ago were far more sophisticated than we generally think.

The entrance to the passage in Newgrange is blocked by one of the kerbstones, an enormous stone which is carved in irregular double spiral patterns. Elsewhere in the passages there are other spirals. It is not known what these spirals signify. They are often described as the ancient Celtic symbol of life, but these spirals were carved 3,000 years before the Celts ever arrived in Ireland.

In the course of excavating the mound, archaeologists discovered many white quartz stones. They think that originally, the hill was covered in these white stones, so in an effort to restore it to its original state, they have replaced the stones. The reconstructed façade of Newgrange is controversial - many people feel that it is only an educated guess as to what the original tomb looked like. The reconstruction also cut away some of the mound so that visitors can walk around the carved kerbstone, rather than having to climb over it.

Older than the Pyramids

Irish people are proud of Newgrange and often boast that it was built before the Pyramids. This is true: Newgrange was built in about 3200 BC, while the Great Pyramid was built about 550 years later, in 2650 BC. But in any other comparison between these two massive constructions, the Great Pyramid comes way ahead - in terms of size, accuracy of alignment, and quality of workmanship. 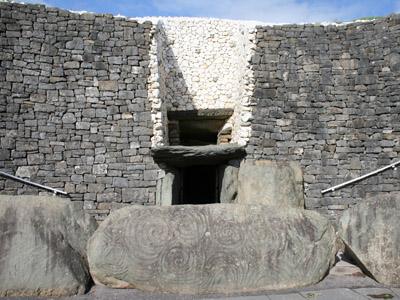 Newgrange is open to the public by guided tour. Visitors must report to the Brú na Bóinne Visitor Centre on the opposite side of the River Boyne, where they walk across a pedestrian bridge and are brought by coach to the site.

Knowth is less well known than Newgrange. It is actually slightly bigger, being about 84m in diameter. There are two passages, aligned to face East and West. The west-facing one is an unbranching curved passage. The east-facing one is cross-shaped and similar to the one in Newgrange. It is claimed that these passages are aligned with the position of the rising and setting sun at the two equinoxes. This claim is not generally accepted and has not been verified.

Knowth has a huge amount of stone carvings. It is reckoned that one quarter of all Europe's neolithic art is held within Knowth! The same spirals appear throughout Knowth, as well as other patterns based on diamonds and chevrons.

While some people dispute the fact that the primary purpose of these mounds was as tombs, there is no doubt that many people were interred there. The remains of 200 people were discovered in Knowth. The stone age practice was to cremate the bodies outside, then place the remains in a hollow in a special stone within the burial chamber called the basin stone. The basin stone in Knowth's western passage is no longer in the burial chamber. In 1000 AD, somebody tried to remove it from the mound, not realising it was bigger than the passage. It got stuck in the passage and remains there to this day.

Tours of Knowth are available from the Brú na Bóinne Visitor Centre. The tour does not allow visitors into the passages themselves.

Dowth is the least well known of the three passage tombs. It is reckoned to be the oldest of the three. It is 84m in diameter, the same size as Knowth. There are two passage graves on the west side. The southern one is said to be aligned with the position of the Sun at sunset on the Winter Solstice.

Dowth also contains a far more recent tunnel from the Early Christian Era, which was added as a hiding place for monks in times of invasion.

There are no guided tours of Dowth at present, as it still under excavation. You can go to the mound yourself, but there is no access to the passages.

The passage tombs were built by the people of the New Stone Age (Neolithic). Radiocarbon dating has been done on some of the soil layers within the mounds to establish the date of construction as around 3200 BC. It is estimated that each hill took about 50 years to build. The basic building material for the mounds was rounded stones from the nearby river. The walls and ceilings of the passages and the kerbstones are large slabs of rock which were probably brought on wood rollers from a quarry nine miles away. The white facing stones consist of quartz from the Wicklow Mountains, 50 miles away, and granite from the Cooley Mountains, 30 miles away. Ireland was covered in forest, so these stones were probably brought by boat. Little is known about the stone age people who built Newgrange, but they were obviously deeply religious, considering the efforts they made to bury their dead.

The later Bronze Age people, (the so-called Beaker people), obviously treated the site with reverence, because they constructed a ring of standing stones around Newgrange. Some of these stones are still visible. For some reason, they never set up any habitation in the area. Why they kept away from the site nobody knows.

When the Celts arrived in Ireland in 300 BC, the mounds were already nearly 3000 years old. They found the three mounds, with a large number of standing stones and smaller mounds. They recognised the place for what it was, a holy place, and in their stories they made it the home of Aonghus the Magician. They named it Brú na Bóinne. They also converted the hill of Knowth into a fortress; it remained in this state until the twelfth century.

We know that the Celts had access to the inside of the tombs, because inscriptions in the Celtic alphabet, Ogham, have been discovered inside. However, over the centuries the entrances were filled in and forgotten.

In 1699, the hill of Newgrange was used as a handy source of small stones for building a nearby road. In the course of the digging, the passage was rediscovered. At first it was thought that the passage must be the work of Vikings in the 7th or 8th Century, because it was not known that the pre-Christian people of Ireland were capable of such work. Eventually it was realised that the tombs were very old. In 1962, archaeologists undertook a massive project: the complete analysis of the three cairns. Cross-sections were taken through Newgrange, while Knowth was completely dismantled and rebuilt. The two passages in it were discovered at this stage. Dowth is still awaiting a complete study.

More detailed pictures of the spiral carvings and the reconstructed façade along with other images of Newgrange at this link.