Ogham - an Ancient Celtic Alphabet Content from the guide to life, the universe and everything

Ogham (pronounced 'oh-um') is an ancient alphabet which was used for inscriptions on stones in Ireland, and the United Kingdom, in 4th Century AD. There are only about 375 inscriptions known and 316 of these are from Ireland. Most of them consist of just a person's name. Irish tradition says that the alphabet was once used on wooden posts, but there are no known examples.

The alphabet is designed to be written along an edge of a stone using straight and diagonal strokes which cross the edge or lie on one side or the other of the edge. The edge may be horizontal or vertical. Vertical inscriptions may be written from top to bottom, or bottom to top.

The basic Ogham alphabet consists of 20 letters. Each consists of between one and five parallel strokes. The strokes can be on the left of the edge, on the right, crossing the edge, or crossing it obliquely. The oblique stroke sometimes appears as a dot on the edge. 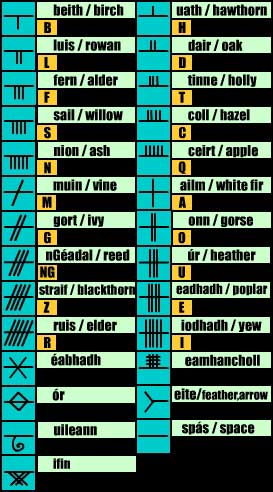 The Ogham alphabet also includes seven extra characters which do not look like any of the others. They appear to have been added later and are used for sounds which do not appear in ancient Irish.

Original Idea or Based on the Roman Alphabet?

In the 'based on Roman' camp, the arguments run as follows:

On the other hand, the 'independent invention' arguments are:

There are a number of strange theories concerning the Ogham alphabet. One theory is that it was a secret writing, known only to a priest class. While this may have been the original purpose of the alphabet, it was certainly not kept secret. In Wales, most of the inscriptions are accompanied by a translation in the Roman alphabet.

Another is that it originated in Central Europe and was carried west to Ireland with the migration of the Celts. The evidence for this is that some of the traditional tree names for the letters are trees that are not found in Ireland. But Ogham inscriptions are not found anywhere in continental Europe and most inscriptions occur in southern Ireland. It is more likely that the alphabet was devised there.

Accounts of using the Ogham letters for magical purposes or divination seem to be entirely fiction, generated in the 20th Century.