British Burial Barrows: Introduction Content from the guide to life, the universe and everything 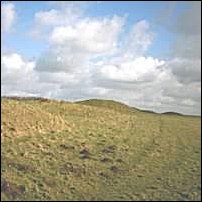 A barrow is a mound of earth used to cover a tomb, and so the term is often interchangeable with burial mound and tumulus. Though the long barrows first appeared some time after 5000 BC, the construction of proper round barrows began on the British mainland c2500 BC with the first major barrow builders, the Neolithic Beaker People1. The construction of barrows continued into the late Bronze Age with some examples from the Iron Age, with a lull during the Roman period followed by a final flourish during the Viking age.

It is possible that this form of tomb developed from the practice of placing the dead or their remains in caves and other natural clefts and holes in the ground. This led to the construction and use of man-made tombs, which spread throughout the British Isles. Burial mounds can be found in a variety of forms including cairns and barrows, both of which cover a burial tomb hidden underneath. During their long history, barrows have developed into various forms including:

The orientation of the passages to the central chambers poses some questions. Many point in the direction of sunrise on Mid-winter's day, thus suggesting that the tomb was designed to be left open or unsealed. This would provide no protection for any remains or grave goods in the chamber. The reason for this is unclear; however it would explain the lack of remains found in the chambers.

The chamber tomb or cairn dates from the late Neolithic period. Unlike a barrow, a cairn consists of a simple pile of rocks laid atop the grave or a chamber and passage constructed in stone. Cairns were thus stone-built, and most had one central chamber along with an entry passage. Again the orientation of the passages suggests a ritual purpose but the reasons remain unclear. Cairns were possibly also reusable tombs as they could be re-opened to allow access after the initial burial. It has been concluded that these tombs were for the more important individuals in the society that built them. The question of security for grave goods would seem to imply that nothing of any value was placed with the dead. Another explanation is that they were provided with an array of grave goods and that the fear or respect for the dead ensured that the community left the graves untouched. It is possible that the tombs were then stripped by later generations who had lost much of the respect or beliefs of those who created them.

In both long barrows and cairns the passage and chamber are roofed over with stone slabs, and access for the burial rituals was via the passage. Neither long barrows nor cairns are attributable to any particular culture or definable burial practice or religion.

The method of construction tended to vary in relationship to the type and quantity of building material available. In the north this was accomplished by laying out the shape on an earthen platform built to take the cairn. On this two circles were set out in stone, the outer being approximately three metres across, while the inner circle would be one metre across and the passage just over half a metre wide. The outer wall would be built with large stones up to a metre across, and the passage and the walls lined with stones laid on their side in a manner similar to those in brickwork or dry stone walls.

These circles were filled with smaller stones carefully laid between the walls to form a solid core. Further to the south, more earth and much less stone was used in the construction. The passage and central chamber were covered with flat stones and an earthen mound was formed to cap the top or completely cover the stonework.

There are also tombs of this type known as ring or sealed cairns. These are constructed in the same way as a standard cairn, the difference being that the passage was omitted. Whether this was a sealed tomb or an open area for religious purposes is unclear.

Examples of this type of tomb vary, tending to get larger as you move further south in Britain, and the designs change allowing for multi chamber tombs, leading to speculation as to the purpose they were designed to serve. The ring cairns at Clava are the best example of the construction of a cairn and a religious complex.

The various types and styles of barrow used several building techniques. The mounds were built over the burial or burials in all cases. The availability of materials as in the stone for cairns played a part in the type that was built. The lowlands of England tended to favour timber and earth construction, whilst in southern England chalk and flint made up the mounds.

This type had the longest continuous period of use, from the Neolithic Age through to the Iron Age, and is also the most common type of barrow. A bowl barrow is best described as a mound of earth surrounded by a ditch, the spoil of the ditch being used to create the mound of the barrow. The type gets its name as it looks like an upturned bowl. A variation of the bowl barrow was also produced by surrounding the barrow and ditch with an outer bank.

Used throughout the Bronze Age, the bell barrow was very similar to the bowl barrow, but with a distinctive narrow, flat shelf, known as a berm, between the barrow mound and the surrounding ditch. The purpose of this is not known and is most likely a stylistic feature.

Once more, a variation of the barrow was created by surrounding the barrow and ditch with an outer bank. Although used for both male and female burials, this type was most often associated with male burials.

The disc barrow was almost the same as the bell barrow, but with a much wider shelf between the barrow mound and the surrounding ditch and a reduction in the height of the mound compared to the bank surrounding the outer ditch. All examples of this type are distinguished by a ditch and outer bank. This type appears simpler to build and would have required much less labour, and this may be the reason that this style developed.

All Bronze Age saucer barrows have a ditch and outer bank. They are hard to make out as the central barrow mound is almost flat and lower in profile than the surrounding outer bank. This type was most often associated with female burials; as saucer barrows and bell barrows are of the same period, there has been speculation of a distinct male and female ritual.

Most likely to have been used as mortuary enclosures, many pond barrows have post holes that indicate a timber platform built to place a body and expose it until only the bones were left. Pond barrows lack the ditch seen in other examples and have just an outer bank, with the ground surface inside the bank having been scooped out to provide the material for the bank. The barrow builders seem to just have provided a representation of the other styles. This could be for many reasons, the most likely being to mark a ritual enclosure, or a change of the burial custom as most of these barrows also mark the site of cremation burials.

A note regarding barrows in Roman Britain - these are not common as up until the 3rd Century AD, a cremation ceremony known as 'the bustum' was the chief method used, and after the 3rd Century Romans preferred cemeteries for burying their dead, examples of which exist all over Britain. The best known Roman barrows in England are the Bartlow Hills at Ashdon, Essex and the Six Hills at Stevenage, Hertfordshire.

When the Vikings arrived in Britain they brought with them the pagan burial customs of their forbears. This can be seen from the evidence found at burials from the Orkneys to the occupied areas of central Britain. A common boat burial of the pagan era is the single burial, the body laid out with weapons and tools, either inside a boat or covered by an upturned small boat2. This in turn was covered with a burial mound.

The distribution of the burials is a useful indication of Viking settlement within Britain. It also shows that the burial customs of the Viking communities changed rapidly after the settlements were established within Britain. The causes of this were the conversion to Christianity3 and the growth of wealth within the communities. This together with the influence of the Saxon upper class led to the habit of burying Viking nobles with stone grave markers on church grounds, thus ending the barrow tradition once and for all.

All forms of the round barrow can be found at Winterbourne Stoke - part of the Stonehenge World Heritage Site - in Wiltshire, southern England. The most common type, the bowl barrow, is present together with bell barrows and disc barrows, providing 700 years of history laid out in front of the visitor.

1The Beaker People were named after the style of the pottery vessels commonly found in their burials as grave goods.2Often the only traces left of the boats are iron nails or rivets found in the ground3The last part of Britain converted to Christianity during this era was the Isle of Wight.4There is a dispute between scholars on this matter, as some believe that Dolmens were left exposed instead of being covered with earth.