British Burial Barrows: Bowl Barrows Content from the guide to life, the universe and everything 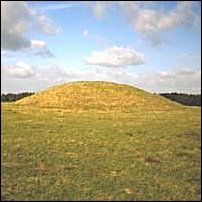 Attributed to the Beaker People (c2500 - 1400 BC), the bowl barrow had the longest period of use right from the Neolithic to the Bronze and Iron Ages. The most basic and common form of barrow in use at the time, the bowl barrow consists of a simple mound of earth surrounded by a ditch, the spoil of the ditch having been used to create the mound of the barrow. The bowl barrow gets its name from the fact that it looks like an upturned bowl.

Variations of the basic bowl barrow were created by surrounding the barrow and the encircling ditch with an outer bank. Unlike community graves like the long barrows that came before them, bowl barrows had a commemorative use. A large number of these barrows did not contain a burial, and it is speculated that they were either erected to commemorate an individual or to mark territorial boundaries.

The bowl barrow is very similar to a bell barrow, but without the flat shelf known as a berm between the barrow mound and the surrounding ditch. The mound is built of stone and soil, covering one or more graves. Some burial pits were square or rectangular, and some were wooden or stone lined - these were known as kyst burials.

The ritual that governed Beaker burials involved laying the body on the left side with the legs bent to face towards the north. Both hands were placed beneath the left cheek, pottery grave goods were placed in front of the face, and if other pottery vessels were present they would be placed behind the back at shoulder level.

The barrows ranged from a huge 40 metres down to as small as four metres. A number of these barrows were surrounded by a ditch at the edge of the mound, with a few examples of ditches encircling two or three barrows having been found in southern Britain. Meanwhile, examples of ditchless types tend to be found in Devon, Cornwall and in the northern counties. When the barrows were new they would have looked striking and those on the chalk downland would have gleamed white in the sunlight. The barrows may therefore have had some religious significance.

Grave goods indicate a belief in an afterlife and vary with the social standing of the dead person. Items buried with the dead were chosen either to show status, such as bronze goods and weapons, necklaces, gold jewellery and sceptres, or were of a domestic nature, such as pottery jars, cups, buttons1 and a variety of flint tools. However, it was rare to provide ritual burial clothes even for important people in the Bronze Age.

Groups of between two and four barrows were usually built in isolation in various situations on plains, valleys and hill slopes, although the most popular sites were those on hilltops. There are between 16,000 and 20,000 round barrows in Britain. These are to be found mainly in the following areas and counties:

Round barrows can also be found throughout Scotland and Wales.

1This indicates a level of sophistication in clothing.