The Uffington White Horse, Oxfordshire, UK Content from the guide to life, the universe and everything 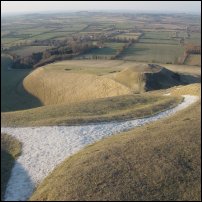 England is famous for many things. Rain. London. Royalty. Queuing. Stiff Upper Lips. Cuisine. Losing at sport. Stonehenge. And it is this landmark that perhaps overshadows some of the other inspiring monuments of the country's ancestry. One such being the Uffington White Horse, which is in all likelihood the oldest hill-carving in Britain (many others can be found, particularly in Wiltshire), with modern dating techniques used by the Oxford Archaeological Unit in 1995 showing it to have been created some time around 1400 - 600BC.

Resembling a horse at full gallop1, it is believed to be either a depiction of the horse/sun god Belinus, associated with agriculture and the festival of Beltane - or the horse goddess Epona, who represented fertility, healing and death and later enjoyed renewed success as the protective goddess of horses by the Roman cavalry. Newer white horses were carved to mark the Millennium (the year 2000) but the hill figures of prehistory like the Uffington White Horse, and those a little younger, continue to have a mysterious quality - so much so as to be reproduced on the cover of the 1982 XTC album 'English Settlement' or mentioned in works of fiction like Terry Pratchett's A Hat Full of Sky.

The Uffington White Horse holds a special place in my heart, as I spent a stunning afternoon one summer wandering around it.
- an h2g2 Researcher

The White Horse is a protected area, looked after and maintained by the National Trust and English Heritage - but you can see it without much effort. Access to the site is free all hours of the day, and there is car-parking available at either Woolstone Hill or Whitehorse Hill, a short 15 minute walk away. It's quite a sloping climb up to the horse though, about 800 feet above sea level, so those that find hills hard going may prefer to see the carving in other ways. Of these, the best is from the air with light aircraft, helicopter and hot-air balloon flights regularly passing overhead2. You can also spot the White Horse while travelling on the Bristol railway from London to Swindon, if you keep your eyes peeled. You are quite free to walk around the horse however, if you choose to scale the hill. Run along its back, step in its eye, or lie on the grass by its feet. All are allowed3. The layout of the carving is awe-inspiring, but it is not just the White Horse that is worth seeing.

The 'castle', actually the remains of an Iron Age hill fort, is the focal point of the area. Views of the surrounding vales prove why this particular hill was chosen as a site for a defensive mound, and the scenery is breathtaking.

If standing in the eye of the horse to make a wish that will come true (as folklore tells), you can see the nearby Dragon Hill. This is the site where St George supposedly slew the dragon of legend. A small patch of chalk is noticeable on the hill, and this is rumoured to be where the dragon's blood fell to the ground from its mortal wound, and ever since, nothing has been able to grow on the spot.

A deep slope and valley that creates a natural 'bowl' at the base of Whitehorse Hill, it is said this is where the spirit of the White Horse would come to feed during a full moon, grazing at the close cropped grass.

The Vale of the White Horse

Other hills to the north in the Vale of the White Horse also make for light to moderate climbing in order to gain a better vantage point to see the carving as intended. A distance of a few miles is recommended, particularly near the village of Great Coxwell - or better still from the air, which is odd, seeing as in around 1400BC aerial views were exceedingly difficult to produce.

The Uffington White Horse is so-called because it has been dug, most probably during the late Bronze Age, so the chalk bedrock contrasts against the grass of the hill. The design, facing to the right and very stylistic (resembling early Celtic art), is roughly 374 feet in length and 110 feet in height. Before 1995, popular belief was that the horse was carved to commemorate Alfred the Great's victory over the Danes in 861AD, however it is more likely that it was simply re-cut and scoured at that time. After which a two- (or three-, or however many) day festival was held every seven years by the local lord to mark the event involving, from all accounts, games, hunting, wrestling and cheese rolling - an outdoor event that consists of a bunch of lunatics chasing a wheel of cheese down a mountainside in the attempt to catch it up and win it for themselves! This festival waned, perhaps due to the many injuries sustained during the wrestling and cheese rolling in the Manger, and it was only through the efforts of locals that the figure remained in good condition with regular weeding and scouring. Reports through the centuries tell of how the site was well cared for by the local people and in 1677 a tourist wrote:

...some that dwell hereabout have an obligation upon their lands to repair and cleanse the landmark, or else in time it may turn green.

Thomas Cox also recorded in his work of 1720, Britannica, that the White Horse was weeded annually, and those doing the work ended the task with 'feasting and merriment'. Thomas Hughes' novel of 1857, The Scouring of the White Horse again tells of a fair - including not cheese rolling, but tobogganing down the hill on the jawbone of a horse! These festivities also petered out during the 19th Century, but the scouring continued until during the Second World War when the Uffington Horse was hidden to minimise the chances of enemy Luftwaffe pilots using the landmark as a navigational aid. Soon after the war the White Horse was uncovered and once again looked after by the locals. It was much later re-scoured in June, 2000 - the edges partially reinforced with concrete (although it's very difficult to notice where), and green netting protecting some of the more well-worn areas. Unfortunately, during August 2002, the site was vandalised by members of a pro-hunt group, the Real Countryside Alliance, with the unwanted addition of a white painted rider and three hunting dogs. This was in protest at an Act of Parliament to ban the bloodsport of fox-hunting. However, the painted figures eventually washed away.

Located a mile and a half south of the village of Uffington, once in Berkshire but is now in Oxfordshire due to some bureaucratic boundary marking during the 1970s, the horse overlooks the Vale of the White Horse. If travelling to the White Horse by car, a small road off the B4507 opposite the turning to Uffington, and signposted accordingly, leads to the car parks. You can also reach the carving by coming along the Ridgeway, the remains of an old road that travels 87 miles from Wiltshire to Herefordshire - or some reports have said 250 miles from Dorset to Norfolk! It is worthwhile taking a trip along the maintained Ridgeway Path - which runs from Overton Hill, near Avebury, Wiltshire in the west to Ivinghoe Beacon, Buckinghamshire in the east and passes through the Chiltern Hills - either by foot or by bicycle (or even horse, if you're that way inclined). Be warned though, depending on the time of year it can be quite muddy, or you may have to compete for room with either local farmers and their tractors, or worse still ignorant 4x4 drivers and quad-bikers. It is best to go in the spring or summer, as trying to squelch in boots or ride a bike through the large mud-filled ditches left by a tractor's wheels is not an easy task.

To make a weekend of it there are a few hotels or bed and breakfasts in Uffington itself, or nearby Ashbury and Wantage. All are small villages with a warm, friendly atmosphere. You can walk into most of the local pubs and find yourself a smiling face and welcoming attitude. Wantage is of particular interest, not only because of historical links to the Saxon King Alfred, but it has some reliable bicycle hire services and taxi firms. Wantage is also the location of a lovely Youth Hostel, situated up a rather large and steep hill out of the town proper of Wantage, upon the crest of the Ridgeway. It's an effort to get to if you're walking or on a bike, but well worth it. A collection of renovated barns and stables, the hostel has some magnificent views and is a recommended stop-over if you are touring the Ridgeway, or simply seeing the countryside.

Just west of the White Horse along the Ridgeway Path is Wayland's Smithy, a remarkable construction that is thought to be the remains of a neolithic burial mound called a long-barrow.

I was with a girl I was very much in love with... and Wayland's Smithy is such a relaxing place; it was so still and silent up there it suited our chilled out mood at the time perfectly... perhaps it was just her hippy tendencies rubbing off on me, but it was a magical day.
- an h2g2 Researcher

This romantic and secluded place, with a quiet and peaceful ambience, takes its strange name from the tale of Wayland the Smith. A character of folklore, Wayland (oft linked to the Norse god Wodin) would shoe a traveller's horse if it was left alone at the 'smithy' with a few coins. On returning to fetch the horse it would be shod, fed and watered. Some stories say that Wayland would sometimes ask a favour in return - much like doing a deal with the Devil. Wayland is linked to the Uffington White Horse, with local legend telling he shod the horse for moonlit rides.
1Some have suggested it is even a dragon.2Locals would rather you opted for the quieter method, as constant 'buzzing' from the air can become annoying.3Or were when this Researcher visited the site.