Driving Etiquette - UK Content from the guide to life, the universe and everything 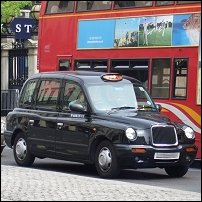 The UK is known1 throughout the world for having politeness as a national trait. The only exception to this is London, which is one of the few places in the UK where the 'British reserve' of politeness is taken as a sign of weakness. Show this trait and 60 hardened London drivers will immediately do their best to eviscerate you.

The observations in this Entry apply generally to the whole of the UK. But please pay extra attention to them when taking to the road in England's bustling capital. Before setting out to drive in London, it is worth taking a few moments to visualise your car as a white van, for these are the true lords of London's roads. They are happy to cross three lanes of traffic without a glance backwards because they know you are far more scared of your insurance than they are of theirs.

Yet even they will not attempt to anger the double-decker bus, which, having now been given a legal right of way on London streets, is making the most of it. Be wary of overtaking these lumbering beasts, for while they may seem to be dozing quietly at the side of the road, they will leap out at you without warning.

During peak times (7-9am and 5-7pm) the left-hand lane is reserved for the 'Anti-Destination League' (ADL) who potter along at 55mph, and the 'Great British Mobile Junction Blocking Brigade' (haulage trucks and caravans). The middle lane should be kept clear for truckers that have been slip-streaming their buddies for the last 50 miles and have just built enough momentum to spend the next 75 miles in a death-defying overtaking manoeuvre. This leaves the right hand lane for everyone else.

The middle lane can sometimes be used to 'undertake' (a deliciously prescient word) yo-yoing drivers in the right hand lane, though you are taking some liberties with previous estimates of your life expectancy.

At off-peak times things change rather dramatically. It has been decided, by a massive subconscious nationwide thought, that there are three new names for the lanes on British motorways: slow, cruise, and fast. Thus, if you are not a lorry or caravan it is your duty to sit in the middle lane, even if you are going quite slowly, with an empty space to your left and numerous cars flashing their headlights behind you. The fast lane is only for people who want to attempt to double the national speed-limit of 70mph and get away with it.

When on holiday in a rural parts of the UK there are a few things to remember:

In the UK people are simply not taught to overtake. Combine that with the naturally anally self-righteous nature of the British driver and poor levels of vehicle control, and observe some simple empirical rules for overtaking and being overtaken.

On being overtaken stare fixedly ahead. Do not, under any circumstances acknowledge the fact that someone wishes to get past you. Wait until they're alongside you. Clench teeth on pipe. Now accelerate. Hard. However, on a motorway make sure you're in the outside lane. Slow down to 68mph. Adjust flat cap. Wait 20 minutes. Tut loudly when passed on the inside.

When overtaking approach to within one paint layer of the vehicle in front. Weave around the road a bit in futile attempt to see past. Wait. Weave. Wait a bit longer. Wait for a blind bend to come up. Now overtake. Indicate (optional). On a motorway, there's usually someone in a Volvo travelling at 68mph in the outside lane, wearing a flat cap and smoking a pipe. The inner two or three lanes are, of course, empty of all traffic. Approach as normal, but drop back and accelerate at them a few times, flashing lights. This is for form's sake only - there will be no response. Wait a short while. Check carefully for marked police cars and other cars with suspicious aerials or cameras. Swerve left (UK road rules, remember). Accelerate up inside, with nose pressed to side window, making ironic gestures to other driver.

There are several options for overtaking bicycles, two of which are:

The Theoretical Physicist: Treat the bicycle as a widthless two-dimensional object of effectively zero velocity and zero mass. Therefore make no change to your trajectory when passing. If you wish to turn left immediately after passing this is not a problem, given the assigned parameters. Any subsequent swearing and crunching noises are an artifact of the cyclist's failure to understand your frame of reference.

The Helpful Swerve: See bicycle when it's 10m away. Wait. Swerve out at last minute, missing cyclist by millimetres. Continue trajectory until you are 5m out when 50m past the cyclist. Swerve back to avoid lorry you've just seen coming the other way.

Rules upon Hearing a Siren

Upon hearing a siren, and thus being in the presence of a vehicle with a flashing blue light that needs to get past extremely quickly, calmly move over as best you can to the side of the road and wait for said vehicle to pass. Then continue on your journey.

Alternatively, do what everyone in the UK does: pull the stupidest manoeuvre possible, and do not pull over in a calm, collected, responsible way. Instead, swerve violently into to path of the oncoming emergency vehicle, or, if it's behind you, jam your brakes on unexpectedly to produce dramatic skids from both your car and the weary public servant who is trying to arrive somewhere else five minutes ago.