World Museum Liverpool, UK Content from the guide to life, the universe and everything 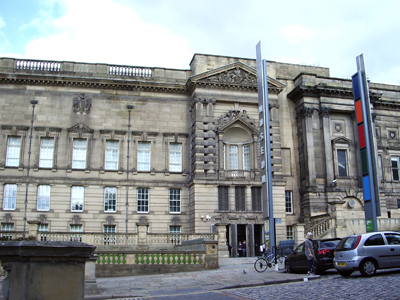 World Museum Liverpool is situated on William Brown Street in Liverpool, not far from the exit of the Queensway Tunnel and just down the hill from the Walker Art Gallery. An extensive museum laid out over six floors, it contains information and artefacts on a range of topics including science and nature, from prehistoric times to the present day.

When you go through the door to the Museum you emerge into the core of the building, and the Entrance Hall stretches from the Ground Floor up to the roof. On display in this space are a variety of artefacts giving visitors a flavour of the whole museum, including a model of an Iguanodon, a preserved Spider Crab, Egyptian statues, a Canadian 'totem pole' and a Sputnik satellite.

The Ground Floor also houses a Learning Base room for school groups and other events, plus the shop selling books and souvenirs, and a small café serving sandwiches, cakes and drinks. There are two lifts to the upper floors.

The First Floor is home to the Aquarium, which contains coldwater fish that are native to the UK as well as a variety of colourful and exotic tropical fish. The Treasure House Theatre is also on this floor, and stages free object handling sessions, performances that bring the Museum's themes to life, lectures, films and even video link ups to other museums around the world1.

The Bug House contains live insects, plus a huge tunnel that leaf-cutter ants traipse through, bringing food back to their ant hills from the adjacent room.

The Clore Natural History Centre contains stuffed animals, skeletons, butterflies and preserved plants as well as a range of different minerals and rocks from the Liverpool area and from around the world. There is an education room there as well, for events relating to the natural world.

Special exhibitions are displayed in a large area on this floor, and range from hands-on exhibits about how muscles work to 2014's Sssnakes Alive, featuring live reptiles and games on a snaky theme.

When the Picton Library was being refurbished, many of the books and other items were relocated to the Museum, which is just next door. The books are now back home, so there is more space in the Museum for future exhibitions.

The Third Floor is all about people, and features art and artefacts from many cultures around the world. There are Egyptian relics, statues and vases from Ancient Greece, busts and pottery from Ancient Rome, and Anglo-Saxon clothing. From the modern world, there are collections of crafted items from Western Africa and the Americas, clothing and decorative wares from the Pacific islands and Australia, religious icons from India and Tibet, bento lunchboxes from Japan, and furniture from China.

The Weston Discovery Centre contains items that can be handled, and there are computers available for people to use to find out more about the items on display or play games on a related theme.

The Fourth Floor is home to dinosaurs - there is a skeleton of a Megalosaurus plus casts of footprints and a section examining what can be learned from fossilised dinosaur poo!

There is also a zone dedicated to more modern animals, such as a wolf in a night-time forest setting, big cats in a replica jungle and a polar bear in an Arctic scene.

There is a small restaurant on the Fifth Floor, with good views of the city from the large windows at one end. The floor is mainly dedicated to the themes of Space and Time, so there is a display of clocks, watches and sundials as well as interactive displays illustrating the Solar System and the technology used to explore it. There is a Planetarium that shows some programmes for children, but it is mainly used to inform people about what they can see in the sky each season - the shows highlight some of the constellations that are in view and mention something about the stars in each one as well as the history behind their names.

The Museum is open every day from 10am to 5pm except Christmas Day, Boxing Day and New Year's Day. Entrance is free, although donations are welcomed.

There is some parking outside the Museum, including several spaces for Blue Badge holders, on William Brown Street, and there are other public car parks nearby. The cloakroom and buggy park is situated on the ground floor, and there are accessible toilets and baby changing rooms on each floor. There is also a Changing Places room available on the First Floor.

Activities for children, exhibition-themed events and workshops are scheduled throughout the year. Up-to-date information can be found on the Museum website.

The Museum originated from the Natural History collection of Edward Smith-Stanley, the 13th Earl of Derby, who died in 1851. A small museum exhibiting some of the items in the collection was opened to the public in 1853 and was impressively popular. When an aquarium2 was added in 1857, the building couldn't cope with the number of visitors, so it was decided that a new site was required.

Wealthy Irish-American merchant and local politician William Brown offered to pay for the new Museum, Gallery and Library building, which was to be in Neo-Classical style to match the nearby St George's Hall. The foundation stone was laid in 1857, and the building was officially completed on 18 October, 1860. The exhibits were transferred in, and the Museum officially opened on 18 October, 1861. The Natural History collection was there, along with a collection of Egyptian items, and some Classical statues. There was also a section about Science and Inventions, and of course the Aquarium.

The collections expanded as the fame of the Museum increased, and visitor numbers rose too. The building of the Walker Art Gallery and the Picton Library next door to the Museum freed up some space in the Museum in 1877 and 1879 respectively. The basement was opened to displays in 1895 and in 1896 an extension was commenced to house more displays plus a Technical School. The School opened in 1901, and the Museum was fully opened in 1906. In addition to the existing collections, a display about Liverpool's history was included, which would more than 100 years later be expanded into the collection housed in the Museum of Liverpool.

During the First World War, the Museum became a school for those children whose classrooms had been taken over for military hospitals. It reopened as a museum in 1919, with a new resident in the Aquarium - Paddy the seal3, who had been moved from the seaside resort of New Brighton on the Wirral when the Blackpool-esque Tower there had been demolished. In 1931, a Maritime History section was set up, which influenced the establishment of the Merseyside Maritime Museum more than 50 years later.

In 1939, the Museum was again prepared for war. Some precious items were moved to secure locations within the building, large exhibits were bolstered with sandbags, small items were transferred into airtight cases and taken to safer locations outside Liverpool, and the Museum was staffed constantly during the day and night in case of action being required during air raids.

The staff were able to deal with a couple of small incendiary bombs in 1940, but in 1941, the Museum fell victim to a direct hit by a 500lb bomb, and the resulting fire raged through the whole building. No members of staff died as a result, although most of the fish in the Aquarium did not survive, and many artefacts were destroyed, including ship models, Pacific crafts and insect specimens. Surviving items were removed to locations outside Liverpool, and the remains of the building was used for military training.

In 1999 the Museum expanded into the areas that had been occupied by the Technical College, which had become Liverpool John Moores University. A refurbishment was planned - the Heritage Lottery Fund provided £24 million towards it, and additional funds were raised from local benefactors and television campaigns. The Museum remained partially open during the construction, but was formally reopened in December 2000.

More extensions took place and building works continued after that, and then the Museum was rebranded from simply Liverpool Museum. World Museum Liverpool, with the layout it has today, opened in April 2005.

1Most notably during the JASON Project, which ran between 1993 and 1996 and enabled audiences to interact with scientists studying oceans, volcanoes and Jupiter's moons. 2Only the third public aquarium in the world after the ones in London Zoo and PT Barnum's New York museum.3Paddy lived in the Museum until he died in 1936.