The Merseyside Maritime Museum, Liverpool, UK Content from the guide to life, the universe and everything 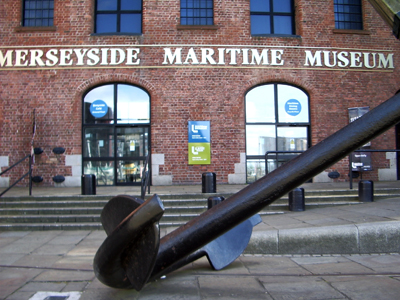 The Merseyside Maritime Museum is situated in Liverpool's Albert Dock, overlooking the River Mersey, with an anchor marking the main entrance. A Maritime Museum was opened for a trial period in 1980, and since 1986 the collection has been housed inside one of the former warehouses at the Albert Dock. The Museum aims to tell the story of Britain's maritime past, with a particular focus on the role of Liverpool in attempting to rule the waves.

The Museum has six floors of exhibitions, including both permanent and temporary spaces. The Museum entrance is on the ground floor, which contains the shop, café and reception desk, plus a temporary gallery. Part of the basement is dedicated to the Border Force National Museum. In addition, the basement holds a permanent exhibition about migration from Liverpool to the New World and the ships that took people on the long journeys to North America and Australasia.

The first floor hosts an exhibition dedicated to three magnificent ships that all sank within three years. The most well-known of the tragedies was the sinking of the Titanic on 14/15 April, 1912. On 29 May, 1914, the Empress of Ireland sank after colliding with another ship, and on 7 May, 1915, the Lusitania was torpedoed on its way to Liverpool from New York. The first floor of the Museum also holds a tribute to the Merchant Navy and its struggles during wartime. On a lighter note, there is a section dedicated to life at sea, including stories from gay men serving on cruise ships and enjoying personal freedom during the time when homosexuality was illegal in the UK.

The second floor has information and displays of model ships from Merseyside shipbuilders, including Cammell Laird. There is a temporary exhibition space, that in 2014 was dedicated to the display of artefacts recovered from the wreckage of the Titanic, and the legacy of the event, including the many films that were made about the tragedy. Finally, there is a section devoted to paintings of seascapes and the Liverpool waterfront. The paintings owned by the Museum are featured in digital form on the BBC YourPaintings website.

The third floor is home to the International Slavery Museum. There is a conference suite and lecture theatre on the fourth floor, at the top of the building.

The International Slavery Museum opened on the third floor of the Merseyside Maritime Museum building in 2007, expanding the collection relating to Liverpool's role in the Slave Trade that had been on display in a smaller area and broadening its scope.

Not only commemorating the people enslaved as part of the Slave Trade in Britain, which was abolished in 1807, it considers the legacy that changed the history and culture of continents, and also highlights the existence of modern day slavery in the form of people trafficking and bonded labour.

Exhibitions include details of people's lives in Africa before the slave trade reached them, the ships that transported people and goods across the Atlantic Ocean, and what happened to the people after that, in America and in Liverpool. Modern art explores the issues for the artists' ancestors through sculpture and painting.

Events take place regularly through the year, and include games, crafts and martial arts as well as object handling days.

Seized! opened in 2008 and looks at the work of Customs Officers and the Border Force. Exhibitions describe the import of goods across country borders. Items that were smuggled in include those hidden to avoid the payment of taxes, or items which were contraband, such as drugs and parts of endangered animals. Events take place each week, so that visitors can learn more about the items that have been discovered, for example, or try their hand at detecting smuggled goods on a ship.

The Maritime Archives on the second floor of the Museum are open on Tuesdays, Wednesdays and Thursdays only. The Archives contain a variety of documents about maritime history and the history of Liverpool, such as maps and blueprints, business records and vintage books. People looking to find information on relatives will find family archives, personal letters, and registers of ships available for viewing.

The Museum is open every day from 10am to 5pm except Christmas Day, Boxing Day and New Year's Day. Entrance is free, although donations are welcomed. The Maritime Restaurant on the fourth floor serves hot and cold food plus afternoon tea, and offers a great view of the area from the window seats. On the ground floor there is also a café for light meals and snacks, and a shop selling a variety of souvenirs, including models of ships, and books.

There is car parking in the Albert Dock, including parking for Blue Badge Holders, but there is a charge. The Museum is mostly wheelchair accessible and there is a lift to all floors, but there are restrictions on the number of wheelchair users allowed on each floor in case of evacuation being required - staff will advise visitors if there is a problem.