Liverpool's Slave Traders Content from the guide to life, the universe and everything 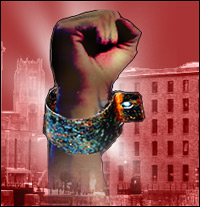 Between 1700 and 1800, Liverpool in north-west England was transformed from not much more than a fishing village into one of the busiest slave-trading ports in the world and thence into a general trading port and city without peer in the 19th and 20th Centuries.

An estimated 15 million Africans were transported as slaves to the Americas between 1540 and 1850. Ships from Liverpool accounted for more than 40% of the European slave trade.

The town and its inhabitants derived great wealth from the trade. It laid the foundations for the town's growth. It is no exaggeration to say that the grand buildings which grace Liverpool's waterfront and inner heart today were built with the blood money of slavery.

In order to understand how and why Liverpool flourished in this way, it is necessary to explain something about the nature of the Slave Trade.

Background to the Slave Trade

After the European discovery of the Americas and West Indies, land was distributed to Europeans who founded plantations to grow commodities much sought after back home. These included sugar, tobacco and cotton. In order to produce goods at a profitable rate, cheap labour was required to work the plantations.

At first, the native people of America and the West Indies were used as slaves but overwork, disease and ill-treatment led to serious labour shortages. Attempts were then made to obtain labour from Ireland and England. English servants could gain free passage and the promise of land, by agreeing to be bound to an employer1 for a set number of years, but few took up the offer.

Why Slaves From Africa?

Europeans were trading in Africa as well as the New World. Slavery already existed in Africa, where tribes enslaved people from other ethnic groups, as prisoners of war, in payment for debt or as a punishment for crimes. African slaves started to be shipped to the plantations in the Americas. To meet the increasing demand from European traders, there was a marked increase in the numbers of wars, raids and kidnapping of individuals, particularly on the west coast.

Landowners in the Americas quickly concluded that African slaves were more suitable than the English or Irish. The reasons usually stated for African slaves being preferred is that they could easily be bought from traders on the West African coast and were more immune to disease than indigenous Americans or imported white slaves. Although there is some truth in these arguments, the main reason was that Africans made good slave labourers because many of them were skilled artisans.

However the hard life of a slave meant nearly one-third of all slaves dying within three years, creating a constant demand to replace them.

Thus started a notorious period in British and American history: that of the Slave Trade.

The transatlantic slave trade generally followed a triangular route. Traders set out from European ports towards Africa's west coast laden with items such as guns, cloth and metal goods. There they bought slaves in exchange for their European cargo and loaded them into the ships. The voyage across the Atlantic itself generally took six to eight weeks. Once in the Americas, those Africans who had survived the journey were off-loaded for sale and put to work as slaves. The ships returned to Europe with goods such as sugar, coffee, tobacco, rice and later cotton, which had been produced by slave labour.

By the 1730s about 15 ships a year were leaving for Africa and this grew to about 50 a year in the 1750s, rising to just over a 100 in each of the early years of the 1770s. Numbers declined during the American War of Independence (1775-1783), but rose to a new peak of 120-130 ships annually in the two decades preceding the abolition of the slave trade in 1807. Probably three-quarters of all European slaving ships at this period left from Liverpool. Overall, Liverpool ships transported half of the three million Africans carried across the Atlantic by British slavers.

Conditions on board ship from Africa to the New World were appalling. The combination of over-crowding, disease, inadequate food, poor weather, unseaworthy ships, rebellion and punishment took a heavy toll on captives and crew alike. Surviving records suggest that until the 1750s one in five Africans on board ship died.

Male slaves were packed together below deck and were secured by leg irons. The space was so cramped they were forced to crouch or lie down. Women and children were kept in separate quarters, sometimes on deck, allowing them limited freedom of movement, but this also exposed them to violence and sexual abuse from the crew.

Some European governments, such as the British and French, introduced laws to control conditions on board. They reduced the numbers of slaves to be carried and required a surgeon to be taken on each voyage. The principal reason for taking action was concern for the crew and not the captives. The surgeons, though often unqualified, were paid head-money to keep slaves alive. By about 1800 records show that the number of Africans who died had declined to about one in 18.

A significant factor in Liverpool's engagement in the Slave Trade was the port's geographical position in the north-west of England, with ready access via a network of rivers and canals to the goods traded in Africa - textiles from Lancashire and Yorkshire, copper and brass from Staffordshire and Cheshire and guns from Birmingham.

Liverpool's first slaving vessel, ironically named Blessing, set sail in 1700. In 1710 two slave ships departed from Liverpool, 24 from London and 20 from Bristol. London then declined and Bristol rose to prominence mid-century, but by 1771 Liverpool was the pre-eminent slave ship port. That year no fewer than 107 left dock on the Mersey on slaving voyages compared with 58 from London and 20 from Bristol. By the end of the 18th century, Liverpool had over 60% of the entire British trade and 40% of the entire European slave trade.

Profits could be huge: the ship Lively made a profit of 300% in 1737, although this was exceptional. Most ships could guarantee a 10% profit.

In Liverpool, there were ten large merchant houses engaged in the slave trade and 349 smaller firms. Shop windows displayed shining chains and manacles, devices to force open the mouths of slaves who refused to eat, neck rings, thumb screws and other implements of torment and oppression.

Not all of Liverpool's wealth was thanks to the slave trade, but it was undoubtedly the backbone of the town's prosperity. Slaving and related trades may have occupied a third and possibly a half of Liverpool's shipping activity in the period 1750 to 1807. The wealth acquired by the town was substantial and the stimulus it gave to trading and industrial development throughout the north-west of England and the Midlands was of crucial importance.

Slave merchants such as Foster Cunliffe made a fortune. He was mayor of the city three times and President of the Liverpool Infirmary and a sponsor of the Bluecoat School. When he wasn't exercising his philanthropic impulses, he sent three or four ships to collect African slaves each year in the 1730s. Before his death, Foster Cunliffe had ensured his son Ellis a seat in parliament. Other families such as the Leylands, Bolds and Kennions prospered in a similar way.

Defending the slave trade in the British Parliament in 1806, Liverpool's MP, General Bonastre Tarleton, himself from a slave-owning family, described with pride Liverpool's rise 'to become the second place in wealth and population in the British Empire'. During the same debate, William Roscoe and William Wilberforce worked on behalf of the Society for the Abolition of the Slave Trade and were adamant that 'nothing short of an entire and immediate abolition will satisfy'. The Parliamentary vote resulted in the abolition of slavery in Britain the following year.

After The Slave Trade

After abolition in Britain in 1807 Liverpool continued to develop the trading connections which had been established by the slave trade, both in Africa and the Americas. It continued to grow and prosper as a maritime port well into the 20th Century, until sea trade declined internationally and the demand for new ships from the Mersey shipyards reduced to such a level that they are now closed.

The Maritime Museum with its gallery detailing the city's role in the trade stands on the corner of Albert Dock. Built in 1841, the dock is next to the former entrance of Canning Dock, Liverpool's first dock used by the slave ships and today filled in and known as Canning Place. Two dry docks used to repair slave ships from the 1750s until the end of the trade are still used today by the Maritime Museum. Aside from this, some buildings of the era survive scattered around the town.

The Bluecoats School, founded and funded by slave merchants, is now an arts centre.

At Pier Head, buildings resonant of the British Empire such as the Liver Building dominate a landscape whose wealth was built with the slave ships that once docked just a few hundred yards away.

The city of Liverpool now officially acknowledges the fact of it once being a major slaving port with the opening of the International Slavery Museum on 23 August, 2007.