The Museum of Liverpool, UK Content from the guide to life, the universe and everything 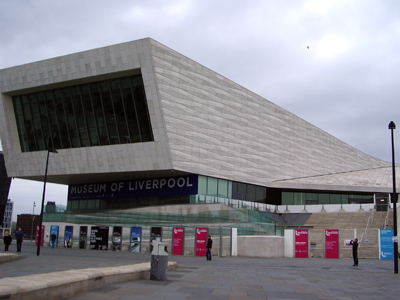 The Museum of Liverpool is situated on Liverpool's Pier Head, in the shadow of the Three Graces (The Liver Building, The Cunard Building and The Port of Liverpool Building) and overlooking the River Mersey. Opened in 2011, it houses a variety of artefacts that tell the story of Liverpool and its people from prehistoric times to the present day.

Designed by architectural firm 3XN, it has large windows that provide a great view of the city and from the outside allow the waves on the river to be reflected in the glass. The walls of the building are textured in a wave-like pattern, again emphasising the Museum's position as a landmark on the Waterfront.

The Museum is home to three floors of exhibitions, including both permanent and temporary spaces. The permanent exhibitions detail the history of the city of Liverpool and its people. The paintings owned by the Museum are featured in digital form on the BBC YourPaintings website.

There are exhibitions about Liverpool's influence on the world, and the world's influence on the city. Objects such as manufactured porcelain, weapons and clothing, portraits of key people and paintings of the evolving skyline, and a replica street depict the changing landscape of the area as an international port and home town. The human aspect of the changes is brought to life in documents, videos and audio recordings of people describing their life in the city, including migrants talking about how and why they moved to Liverpool from their home countries.

There is a timeline of the development of the area, from the birds and wildlife that used to live there before the land became urban, to the tools that humans used to make their mark on the land, the industries that were established, and the toys that children enjoyed in times past. In particular, there is an area dedicated to the history of the Liverpool Overhead Railway - an interactive map shows where the railway used to be situated, and visitors can climb inside one of the railway's carriages.

As well as looking at the history of Liverpool, there are also exhibits relating to the culture of the city. Sport is a key part of many local people's lives, including horseracing, boxing and of course football, as both Liverpool Football Club and Everton Football Club are Premier League sides that attract supporters from inside and outside the city. Memorabilia, interactive activities and videos bring the great sporting moments to life in the Museum.

Liverpool is also well known for its music scene, and the Museum includes a tribute to that - there's a recording booth where bold visitors can sing along to famous songs by local bands, and there are listening posts where you can watch videos of Frankie Goes to Hollywood, for example, or listen to Half Man Half Biscuit sing about their 'Joy Division Oven Gloves'.

Even though there are museums dedicated to The Beatles nearby, in the Albert Dock and a short distance from the Museum of Liverpool on the Waterfront, no museum of Liverpool would be complete without a mention of the internationally famous band. There's merchandise and memorabilia about The Beatles in the Museum displays, and 'The Beatles Show' is broadcast several times each day.

The Museum contains several Education Rooms for workshops to take place and for new items to be created and viewed. It also provides various different spaces for the display of temporary exhibitions. For example, in 2013 photographs by Mike McCartney1 were displayed to excellent effect on the walls of the atrium around the main staircase. In 2012 the atrium was home to the Liverpool Tapestry, which had been made by the Embroiderers' Guild for Liverpool's year as the 2008 European Capital of Culture.

Throughout 2014, the large exhibition space on the first floor was dedicated to the story of April Ashley - she was born in Liverpool and became a pioneer, campaigner and icon in the field of transgender rights. The exhibition combined items from April's personal life with a video of her own reminiscences and a timeline showing how attitudes and the law in relation to transgender people changed since April was born in 1935. The exhibition also included the voices of transpeople living in Liverpool today.

The Museum is open every day from 10am to 5pm except Christmas Day, Boxing Day and New Year's Day. Entrance is free, although donations are welcomed. There is a café serving hot and cold food, cakes and drinks, and a shop selling a variety of souvenirs, sweets and books.

Disabled people with Blue Badges can book a parking space in front of the building, but general parking is only available in the public car parks in Liverpool One or the Albert Dock. It is a wheelchair accessible building, and a variety of toilet facilities can be found inside, including a Changing Places room. There are tactile models for people to explore. Transcripts of the audio history exhibits are in folders by each listening post, videos are subtitled and a Hearing Loop is available. The cloakroom and buggy park is situated on the ground floor. The prayer room is on the first floor.

Hands on activities for children and film screenings take place every day, and there are also exhibition-themed events and workshops that are scheduled throughout the year. Up to date information can be found on the Museum website.