Half Man Half Biscuit - the Band Content from the guide to life, the universe and everything 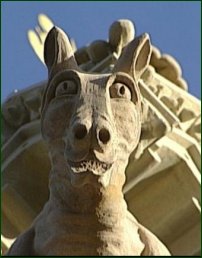 Have you tuned in to Radio Dada?
Every Friday evening at six in the morning.

Half Man Half Biscuit are a band. They are unlike any other band you have ever heard. They are funny - achingly funny - but not even remotely in the 'novelty band' manner such as The Barron Knights, 'Weird Al' Yankovic or The Darkness. Apart from anything else, they're more erudite, in a trash-culture obsessed way - but not satirical in the manner of Flanders and Swann or Tom Lehrer, nor self-conscious as in Randy Newman or Loudon Wainwright III. Much of their humour relies on an absurdist clash of references and non sequiturs, and they are saved from whimsy by a strong undercurrent of venom.

References in their songs run from 1960s children's television to East European football clubs to obscure indie bands to George Orwell to hymns (they sometimes 'borrow' their tunes) to AE Houseman to football commentators to Thomas Hardy....and, of course....snooker referees - often in the same song1. Their cultural references are spot-on - although you perhaps have to be on the same wavelength. However, they may not travel well and those not thoroughly familiar with the UK possibly shouldn't even try.

The unrivalled Radio DJ John Peel once said of them:

They are a national treasure....when I die I want to be buried with them.

The Bastard Sons of Dean Friedman

Founder members, Nigel Blackwell (singer, guitarist, songwriter) and Neil Crossley (bass) grew up on the same estate in Birkenhead2, that jewel of the Wirral, a city of smackheads, retail desolation and a fine town hall, linked to Liverpool by road and train tunnels and by ferry.

Later joined by Nigel's brother Simon Blackwell (lead guitar) and his mate Paul Wright (drums), the band wasn't really formed with any aim of getting a record deal. It was more of a way of getting though the day by doing something more interesting than writing on the sole of your slipper with a biro. Nevertheless, due to a deal with a mate who was setting up a recording studio, they managed, with the addition of new member David Lloyd (keyboards) to record their first album for ï¿½404. They touted this around a few labels until they struck a deal with Liverpool's Probe Plus label5 to whom they've been loyal ever since.

Four Lads Who Shook The Wirral

The band 'crashed onto the indie scene' in 1984 with the album Back in the DHSS6. This gloriously lo-fi album, which became the highest selling 'indie' album of 19867 featured such gems as 'Venus in Flares', 'I Love You (Because You Look Like Jim Reeves)', 'The Len Ganley Stance', 'I Hate Nerys Hughes (From the Heart)' and 'I Left My Heart in Papworth General.'

To give an idea of some of their lyrics:

Have you ever wondered how you get triangles from a cow?
You need butter, milk and cheese,
and an equilateral chainsaw.
– from '99% of Gargoyles Look Like Bob Todd'

Time flies by when you're the driver of a train,
Speeding out of Trumpton with a cargo of cocaine.
Under bridges, over bridges, to our destination.
Careful with that spliff, Eugene, it causes condensation.
– from 'Time Flies By'

and not to forget two glorious couplets from 'Reflections In A Flat':

We would shop at Marks and Spencer,
La la la la Lech Walesa.

In 1986, the single was followed up by the instant indie smash single/EP8Trumpton Riots9. This seminal work10, evoking childhood memories of the interrelated TV programmes, Camberwick Green, Trumpton and Chigley was launched into a nation dominated by Margaret Thatcher and against the background of insurrections in Tottenham, Toxteth (just 'over the water' in Liverpool) and Brixton. Kicking off with a raucous, hummed intro to the tune of the Bunyanesque hymn 'He Who Would Valour Seek'11, followed by the Trumpton firemen's roll call (Pugh, Pugh, Barney McGrew, Cuthbert, Dibble, Grubb). It then launches with a visceral cry of 'ELEVATE!' into a glorious noisome thrash fest12 accompanied by what sounds like a Bontempi® home organ. Telling the tale of anti-unemployment riots in the Chigley side of town, led by the Chippy Minton Socialists and Windy Militant with his Basque-like corngrinders, it pretty much succeeds in mentioning every character in the series. As such, while brilliantly funny to those who grew up on such fare, is probably meaningless to others. Its chorus runs:

Someone get a message through to Captain Snort,
That they better start assembling the boys from the fort,
And keep Mrs Honeyman right out of sight,
'COS THERE'S GONNA BE A RIOT DOWN IN TRUMPTON TONIGHT!

Shine your shoes up and go down to the Crucible

This was the band's big chance for success. Except that they didn't really want it. While they enjoyed playing live, they were uncomfortable with the round of media attention. When asked to appear on Channel 4's influential music show, The Tube, they turned down the opportunity in preference for watching a home game for their local football team, Tranmere Rovers. Channel 4 even offered to fly them home in time by helicopter! Die young and leave beautiful corpses, they say, and in 1986, the band split. A posthumous album was released, Back Again in the DHSS:

Mention the 'Lord of the Rings' one more time,
And I'll more than likely kill you.
'Moorcock, Moorcock, Michael Moorcock!' you fervently moan.
– from 'She's Got Dickie Davies Eyes'

Supercallifragilisticborussiamoenchengladbach
– from 'The Bastard Son of Dean Friedman'

But frabjous day! Callooh, callay! In 1990 our beamish boys reformed with the same line-up. They released a single, 'Let's Not' followed by a peculiar duet of Piaf's 'No Regrets' with Liverpool actress Margie 'Margox' Clarke (Letter to Brezhnev) and a new album, McIntyre, Treadmore and Davitt.

Since then, with the odd personnel change, they have continued to release a steady trickle of albums and EPs and have maintained their talent for arcane lyrics and bizarre album song titles ('An Outbreak of Vitas Gerulaitis'; 'Whiteness, Thy Name is Meltonian'; 'Turned Up, Clocked On, Laid Off'; 'Floreat Inertia'; 'Fretwork Homework'; 'Dead Men Don't Need Season Tickets'; 'Deep House Victims Minibus Appeal'; 'Tonight, Matthew, I'm Going To Be With Jesus'; 'He Who Would Valium Take'; 'Hair Like Brian May Blues'; 'Ready Steady Goa'; 'Uffington Wassail'; 'The Ballad of Climie Fisher'; 'With Goth On Our Side'; 'Lock Up Your Mountain Bikes'; 'Ecclesiastical Perks'; 'Paradise Lost (You're The Reason Why)'....need I go on?

They've got the whole world,
In their house.
– from 'Paintball's Coming Home'

As singer/lyricist Blackwell says, [They] are everyone's third favourite band. So, thank God for giving us Half Man Half Biscuit, but remember....

He also gave us Lionel Blairrrrrr!!!

The following albums have been released on CD:

The official Half Man Half Biscuit site

The Trumptonshire Web: A guide to one of the band's early obsessions

A Dukla Prague site - in Czech, though

Much amusement can also be derived by going to Google, searching for 'half man biscuit lyrics' and reading some of the misguided transcriptions14.

And I don't know anyone who puts peaches in their cornflakes, neither.

1Their many and various cultural references are illustrated in the song titles and lyrics on this page. Ideally, these would be explained in footnotes - only we'd be here all day.2The One-eyed City - so called because 'There's only one I in Birkenhead, la!'33That last footnote was misleading. It's because of the disgracefully high number of shipyard workers at Cammel Lairds - once the city's major employer - who caught white-hot rivets in the eye.4Quite a lot when you're on the dole.5Operating out of the legendary Probe Records shop, Mathew Street - just down from the Cavern where the Beatles used to do their thing.6Subtitles for the hard of thinking: This is a mixed reference to both a Beatles song and the forerunner to the Department of Work and Pensions.7These were the days when indie meant amateurish guitars and Joy Divisionesque miserabilism.8In those days, this meant a circle of plastic with grooves on either side.9Later reprised in a finger pickin' stylee as 'On Finding The Studio Banjo' on the Saucy Haulage Ballads EP.10Number 14 in John Peel's annual 'Festive Fifty' poll.11For no obvious reason.12Enough with the Lester Bangs, already!13A song about Subbuteo. The title refers to the Czechoslovakian army football team, now split and relocated and playing as Marila Přibram. Those seeking Dukla shirts and other memorabilia, there is a tiny Dukla shop, located in the maze of alleyways between Prague's Old Town Square and the river Vltava. They are well used to enquiries from Half Man Half Biscuit fans. They do not, however, sell away kits.14Beware, though. Some of these sites have annoying pop-ups which entice you to buy nonexistent Half Man Half Biscuit polyphonic ringtones. The thought that such a thing should exist is in itself mildly hilarious.