The five pillars of Islam: Salaat - Prayer Content from the guide to life, the universe and everything 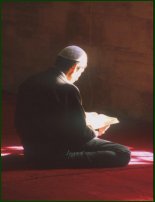 In this Entry we will be looking at Salaat - 'prayer' in English - and hopefully by the end we should have a better understanding of Salaat and have an opinion on the Islamic way of life. Before getting started on Salaat, it would be worth mentioning that Salaat is considered the second pillar of five that makes up the key things Muslims belief in and do. The five pillars are:

Prayer (Salaat) is the most important pillar of Islam, as it is the dividing line between belief and disbelief. Prayer is compulsory for every Muslim who has reached puberty and is of a sound mind. In Islam, prayer is considered the primary method of worship. In fact, prayer is deemed so important that intentionally missing one is a sin. It is a sin because, in Islam, Muslims believe that not praying is not only against God but also against human nature itself - as such it is considered an act of crime to a person's soul.

There are many verses in the Qur'an that tell Muslims to observe prayer regularly.

Verily, the prayer is enjoined on the believers at stated times.
(4:103)

The Prophet Mohammad constantly reminded people of the importance of prayer. Here are a few hadith (words and sayings of the prophet) on the subject.

The Prophet Mohammad asked his companions: 'Tell me, if one of you had a river at his door and took a bath in it five times a day, would any dirt remain on his body?' The companions replied 'No, no dirt would be left on his body.' The Prophet then said 'This is an example of the five prayers by which Allah washes away the sins.'

Muslims believe that prayer is the best way to cultivate a sound personality and to set a person's aspirations on a mature path of development. To neglect prayer is to suppress the good qualities of human nature and to deny the soul's right to love and worship, the right to excel in goodness and to achieve noble aims. Though it is incumbent for all Muslims to pray, it is not done because God requires prayer - God is free from all wants, needs and desires. God is only interested in mankind's prosperity and wellbeing as any good we do is for our own benefit, and whatever offences we commit are against our own soul. As such, prayer is not only a form of worship in Islam, but also a reminder that we will be judged for our own deeds and helps Muslims doing bad deeds as they is more aware of their actions. Muslims also believe that there are many other benefits brought to you by prayer; here are a few of them:

As we can see, Muslims believe that Islamic prayer is not simply a sequence of physical movements and recital of the Qur'an. To Muslims it is a method of spiritual devotion, moral elevation, intellectual meditation and physical exercise. For Muslims, prayer is a lesson in discipline and willpower and be a practice in devotion to God. It is a reminder of God's greatness and an aid to help against indecency, evil, deviation and a way to in which to increase faith. To Muslims it is also a source of patience, courage, hope, confidence, inner peace, stability, equality, unity and an expression of thankfulness to God, all rolled up into one package.

In Islam there are three different types of prayer a person can perform. The first type of prayer is Fard, or obligatory prayer. It is made up of the five daily prayers.

The funeral prayer is also a Fard prayer, but it is a collective obligation on the whole Muslim community. In other words, once one or more of them perform it, it is not then necessary for everyone else to.

The Sunnah prayers or supererogatory prayers are extra prayers that should be undertaken though it is not an actual sin not to perform them. It is considered harmful negligence and reproachable conduct to intentionally miss one when you have time to perform it. These prayers are mainly made up by those accompanying the five daily and two Eid prayers, such as the noon congregation on Fridays (Jummah), the Hajj prayer (Tawaf) and prayers that have become necessary due to a vow or oath.

The last type is the Nafl or optional prayer and as its name suggests is made up of voluntary prayers. Voluntary prayers basically come in two types:

The most important of all the prayers are the five daily prayers normally referred to as just Salah. These must be undertaken by all Muslims, unless there is a valid reason not to, which will be discussed later.

These five prayers individually are:

As mentioned earlier, prayer must be performed by all Muslims unless they have a reasonable excuse. Prayer is not obligatory for:

Requirements of Dress in Salah

Another requirement for valid prayer is that proper clothing should be worn. The conditions for proper dress in prayer are:

Along with these conditions, there is a 'minimum requirement' for the amount of clothing that should be worn. For men this is something that covers the navel to the ankles and for women the whole body and hair except the face, hands and feet. Though men can pray bare-chested, it should not be done and it is preferred for a man to cover his whole body as well. It's optional for men to cover their hair.

While on the subject of clothing, it should be mentioned that there are instances where it is permissible to wear unclean clothing. If a person has an abcess, wound or cut which is bleeding, and cleaning the blood away could be harmful, then it is permissible to pray. However, if the blood spreads to an area immediately close to the wound it must be cleaned away. Blood from the mouth, nose or due to haemorrhoids does not invalidate prayer as long as blood is cleaned away at the start of prayer.

In situations such as the above, if there is some compulsion to pray, then prayer is allowed.

In Islam it is a must that a person performing prayer is in a pure clean state. So to make sure of this purity Muslims perform an ablution before prayer. There are two types of ablution called wudu and ghusl. If someone has done wudu or ghusl and has not done anything to make themselves impure then they do not have to repeat it before each prayer.

Ghusl on the other hand involves the washing of the entire body. Ghusl must be performed if someone has intercourse or ejaculates or following menstruation, childbirth, touching a corpse, washing a corpse or when someone converts to Islam.

Muslims should also remove underarm and pubic hair at least once a month. This is because these two areas are seen to sweat a lot. It is considered unclean to have long hair in those areas, as the hairs soak up the smell of perspiration.

There are many reasons why a Muslim must make intention before prayer, but the main reason is because prayer should be for the sake of Allah and not for any other reason. For example, someone who prays in public because he wants people to think better of him, rather than out of worship of Allah, is praying for the wrong reasons. Making intention reminds Muslims that prayer should be focussed on the worship of Allah and not for personal goals in this world.

The place of prayer

Muslims do not always have to pray in a Mosque. Still, in these circumstances, the following rules have to be observed:

Of course, for Muslims, the best place to pray is inside a Mosque, as there is more reward in praying in Mosques - especially in congregation.

Hopefully this article has helped you understand why Muslims pray and the requirements that go in to it. For Muslims, a prayer is a very serious and important thing, as it is the main difference between belief and disbelief.