The Walker Art Gallery, Liverpool, UK Content from the guide to life, the universe and everything 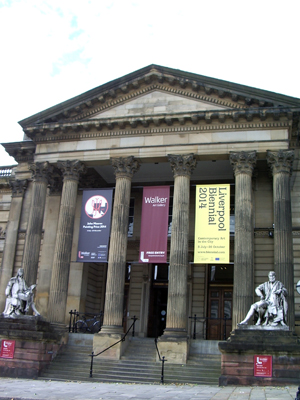 Situated on William Brown Street in Liverpool, not far from the exit of the Queensway Tunnel, the Walker Art Gallery is home to art from Medieval times to the present day.

The Gallery was founded in 1874 to house Liverpool Town Council's art collection that had previously been on display in the library nearby. The funding for the construction of the building was partly supplied by the Council, but a £20,000 donation was given by Andrew Barclay Walker, a local brewer who had served as Mayor of Liverpool in 1873, so the Gallery was named after him.

Hundreds of thousands of people visited each year, and the art collection expanded considerably with the regular purchase of contemporary art as well as older works donated by private collectors. More funding was needed for an extension to the building that was completed in 1884, and Andrew Walker paid the whole amount - £11,500. He died in 1893, so when the Gallery needed extending again between 1931 and 1933, other local philanthropists donated money to help with the costs. Andrew Walker's son, who became Lord Wavertree, donated £20,000 in 1933 to celebrate the reopening, and also gave the Gallery items from his own art collection.

The Gallery closed during World War II, and the collections were moved to safer places. The building was used as an office for the Ministry of Food until 1945, and the Gallery was able to reopen in 1951. In addition to exhibitions of artwork, events and activities started to be arranged throughout each year, and a Schools Officer was appointed in 1957 with the aim of encouraging children as well as adults to appreciate the items on display. In 1999 the Gallery closed for refurbishment; it reopened in 2002. The art collections continue to expand and the programme of exhibitions and events continues to attract and inspire visitors today.

The Gallery has two floors. On the ground floor there is the Big Art room with activities for children. There is a Sculpture Gallery containing classical and classical-style reliefs and statues including busts of Greek gods and goddesses, and The Tinted Venus, which caused controversy at the time it was made in the 1850s because people had become so used to seeing plain white marble sculptures in Greece and Rome (not knowing that they had often been colourfully painted in the past). The Craft and Design Gallery features items such as ceramic tiles, teapots and chairs. It also contains a space dedicated to temporary exhibitions of fashion and textiles - items that have been displayed there range from 18th Century dresses to 1970s high street fashion to outfits worn by famous people such as Frankie Goes to Hollywood singer Holly Johnson in the 1980s.

The first floor holds the collection of paintings, from religious icons of the 13th Century to a portrait of Queen Elizabeth I by Nicholas Hilliard from the 16th Century to installation art from the 21st Century. The largest collection consists of Victorian Art, including paintings of horses by George Stubbs and other artists, and works by Pre-Raphaelites from Liverpool and beyond. There are also several rooms dedicated to prize-winning modern art from the John Moores Painting Prize Competition. There is a large temporary exhibition gallery which has hosted retrospectives of artists including Rolf Harris and David Hockney1. Temporary exhibitions are also staged in the atrium around the main staircase alongside very large paintings and a sculpture by Rodin - for example the 2004 video installation 'Journey to the Lower World' by Marcus Coates was staged in that area during 2010.

The paintings owned by the Gallery are featured in digital form on the BBC YourPaintings website.

The Gallery is open every day from 10am to 5pm except Christmas Day, Boxing Day and New Year's Day. Entrance is free, although donations are welcomed. There is a café serving hot and cold food, cakes and drinks, and a shop selling a variety of souvenirs, cards and books.

There is some parking outside the Gallery, including several spaces for Blue Badge holders, on William Brown Street, and there are other public car parks nearby. The entrance has stairs and a ramp. The cloakroom and buggy park is situated on the ground floor, the accessible toilet is also on the ground floor, and the baby changing room is on the first floor.

Activities for children, exhibition-themed events and workshops are scheduled throughout the year. Up to date information can be found on the Gallery website.