School Photo Day Content from the guide to life, the universe and everything 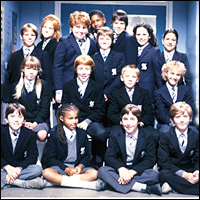 Most, if not all schools nowadays have an annual school photo day. It probably started in the days before every home had a camera and would provide proof - if any were needed - that a) you had a child and b) that child had an education. This in itself was mostly harmless. The trouble with this practice and this particular day in the school year is that the product can haunt you for the rest of your life.

At some point prior to the appointed date, the school will issue a note to advise pupils - and parents - that the photographer will be coming and make everyone aware of the acceptable dress code. This will be school uniform as specified, or in a non-uniform school they will probably request something smart but casual.

You will also have a very precise time to attend for the photograph, and depending on the size of the school there could be a tight schedule.

The Normal Course of Events

The note providing details will be 'filed' at the bottom of the schoolbag for presentation to parents only on the evening prior to the photo day. This is to ensure maximum stress for the whole family while you try to decide what to wear, find missing items of school uniform and get them all freshly laundered for the photo opportunity. This is because the things you 'need' for the photo will surely be at the bottom of the washing basket.

At 10:00pm on the night before the photo shoot you will probably find that several unspecified blemishes have appeared about the face. It will not be possible to cover them with your hair because they will inevitably be in the middle of the face - very probably around the nose or mouth - and your hair has developed a mind of its own in any case.

At this point panic will inevitably ensue. Boys and girls alike will attempt the toothpaste1 remedy and reach for the nearest spot concealer, but all to no avail.

The morning of the photo shoot arrives, and for the first time all year you fail to awaken at the sound of the alarm.

While you do have time for a shower, there is no time for hair styling or breakfast. A parent will insist that you can't leave for school without some nourishment so you will attempt breakfast in a hurry. Obviously, with undue haste comes due hazard. Like watching a train crash, your long-suffering mother will look on helplessly as you spill milk down the front of your chosen outfit. Having spent two hours the previous evening trying on and eventually finding suitable clothes, this little accident will cause considerable stress. Still, no use crying over spilt milk.

A quick change and off to school means that at least the rest of the household can relax.

If you are very lucky your class will be the first of the day to be snapped by the photographer and this will minimise the chance of any further mishaps. Failing that, you will have to proceed through the timetable with extreme caution. It should be possible to make it to break time intact, but caution should be taken depending on the classes attended. Particular care around pens2, paint or charcoal is recommended.

Eventually, you will be snapped and think no more about the whole stressful business for a few weeks.

School photos do have a habit of disappointing, and some weeks later you will be presented with a pack of varying sized photographs to take home to parents. While you thought you were giving the lens your best and most charming smile, what it actually captured was a rigor mortis type fixed grin and eyes that appear not exactly to mirror the soul, more like mirror the vacant attic room.

Your parents will nonetheless purchase the photographs at an inflated price to help fund the school. They will then be passed to various relatives ad other interested parties in Christmas or birthday cards. Suddenly, your image will be gracing between four and 16 living rooms, plus all your classmates' homes as well if a group shot was taken - not a pleasant prospect3.

Of course the image will be replaced annually until you leave school, but the old photographs don't go away - they languish in drawers or shoeboxes waiting to return to glory.

The glory will only become apparent when you have found yourself a prospective life partner. At this stage the school photos will make a reappearance, and the worst one will be shown most often. Your mate will show an inordinate interest in this photo because it will give an indication of what any future children may look like at a similar age. It is at this moment that you will wish you had paid more attention to the preparation for your school photo.

Preparation - Or - How To Get It Right!

When the note is handed out, take it home and share the contents with the family. Have the date marked up on a calendar so that you can see it coming up.

If you don’t already spend a half hour per night cleansing, toning and moisturising your face - start now! It will also benefit your skin, eyes and hair if you eat the recommended daily intake of fruit and vegetables.

At least two days before the photo opportunity, begin to gather together your suitable clothing. This will allow any essential items to be rediscovered or indeed purchased.

The evening before the photograph - don't make any plans. Relax in a hot bath and wash and style your hair - just in case you don't manage to get up on time in the morning.

Go to bed and if possible to sleep early - not forgetting to set the alarm.

On the big day get up early to avoid a last-minute rush. Eat breakfast before getting showered and dressed to avoid any last-minute spillage. Take an over-garment like a cardigan or pullover - this can be used in emergencies should anything untoward happen in the run-up to your 60 seconds with the photographer.

The most important thing is to relax and think happy thoughts when you have your minute in the chair. This way your school photo can never be used against you in the future and may, if you're particularly photogenic, make an appearance in the school calendar.

Finally, with regard to the class, school group or entire school photo, do not be tempted to act on impulse. Some very funny notions will run through your head while waiting for the photographer to set this shot up, but whatever you do - don't act on them. H2g2 researchers have reported 'adaptations' to school uniform, rabbit ears for the person in front of you and the ever popular face-pulling as the leading temptations. There is also the run from one side to the other ploy. This works best with the entire-school4 photos, and if your timing is right you could appear in the photograph at both ends of the line-up. This was more easily done before the digital camera became common. It was possible because the camera used had a clockwork mechanism that panned the camera from right to left, while the film moved from left to right at exactly the correct rate, so that the image stayed still relative to the moving film. It had a vertical slit shutter that stayed open the whole time and would expose new film continuously as the camera rotated.

Resist the urge for tomfoolery at all costs, this photograph will go to dozens or perhaps hundreds homes and you don't want to be seen as 'that eejit' for the rest of time. You may also find yourself feeling the wrath of the photographer. Some of these people specialise in school and wedding photos and can be a touch precious about the product they're creating. You may have to suffer repeated 'barked' instruction and fussy minute detail - but it's best just to go along with this and follow the path of least resistance. He or she may attempt to make you smile by shouting random phrases. Also expect such words as 'sausages' 'sweeties' or 'teatime' to be your cue to repeat them in the search for your most becoming look. Try to ignore this behaviour and find your natural smile for the best results.

1Toothpaste is known to be helpful in drying out greasy spots on the face. Simply apply a dab of toothpaste on the offensive blemish before retiring and the eruptions should dry out considerably overnight.2Pens have been known to spontaneously leak.3You can avoid this if at the last minute you move behind the person beside you. It means they'll have a strange looking head, but your parents will not feel obliged to purchase this photo.4H2g2 researchers report that this photograph can be anything up to 5ft long.