Mixing Breakfast Cereal Content from the guide to life, the universe and everything 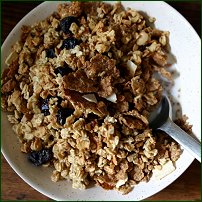 Breakfast cereal can provide an ideal balance of goodness - potentially including carbohydrates, fibre, vitamins and minerals - to start the day, providing the body with the essential fuel to get through the uphill struggle of a morning filled with hard work or study. While modern life often creates a perceived need to skip breakfast, it provides an enjoyable start to the day vital in maintaining the energy to see you through until lunchtime.

Although cereal does not hold a monopoly in the breakfast stakes, it does offer the greatest variety. While you can wrangle a few dozen combinations out of a Full English Breakfast, the sheer quantity of cereal brands and variants1 means that it is most likely possible to eat a different cereal every single day for months on end without having the same experience twice. To make matters even more interesting cereal invites experimentation, allowing a myriad of possible combinations of two or more cereals in the same bowl. While such experimentation has the potential to lead to disaster, it more than compensates for the occasional dud with a multitude of taste and texture sensations.

Anyone considering a little cereal-mixing would be wise to gather some basic equipment and supplies. While you can get by with a few boxes of cereal, a bowl, some liquid and a random piece of cutlery, the serious breakfaster will take the time to prepare more thoroughly.

It should be noted that the whole concept really doesn't work at all without cereal. Consider spending some time in your local supermarket browsing the contents of the cereal aisle and keep your mind open to new ideas and tastes. Don't simply discount something because of the description or a childhood fear of some specific ingredient - if you don't experiment, you will never really get the most out of mixing cereal. It is best to buy as large a variety of cereals as you can afford and store - if you don't want to invest in big boxes, you can always buy a few different brands of variety pack or samples.

Most breakfasters will want to add some liquid to the equation, and what form that liquid takes comes down to personal taste and dietary restrictions. Milk fills the slot of the traditional addition to cereal, and you can mix and match here with source (cow, goat, soy), fat content (skimmed, semi-skimmed, full, extra super creamy) and treatments/additions (extra vitamins, reduced lactose, long life). Instead of milk, you might want to consider variants such as flavoured milk or a milkshake-type drink, thicker products such as yoghurts, or something entirely different, such as fruit juice, a common alternative to milk for breakfasting vegans.

Before you begin, you need to overcome any residual guilt relating to buying so much cereal unlikely to provide a 100% nutritional value. It is best to reason that cereal-mixing should be considered a treat designed to break the monotony of a healthier choice. If you don't spend the time to deal with your personal dietary demons, cereal-mixing may become less of the entertaining and enjoyable experience it should be.

Once you have gathered all your supplies and equipment, you can start with the whole business of mixing. First of all you need to consider how you intend to mix your cereal, then exactly what cereal combinations you intend to try3.

You can approach mixing cereal in different ways, either premeditated or ad hoc.

Premeditated mixing best suits those with experience who know what mixtures work best for them, as it allows them to reduce the early morning fuss. While premeditated mixing means you save time by having your favoured concoctions on hand, the potential exists for progressive taint where strongly flavoured or heavily sweetened cereals 'rub off' on the cereals mixed in with them. Sometimes, this flavour osmosis might well represent the ideal means to an unusual end; but, at other times it might lead to deterioration of both flavour and texture. As a result, mixers should avoid premeditated combinations of anything but the blandest of base cereals, unless they intend to experiment.

Ad hoc mixing generates greater potential for new experiences, enhanced by the mildly delusional state common in those blundering around the kitchen first thing in the morning. Throwing caution to the wind, the ad hoc mix invites the opportunity to try something completely different and bizarre, potentially introducing cereals from any source. Fresh from the box or storage container, the cereals involved mix for the first time, avoiding the cross-contamination of flavours made possible by pre-mixing.

Ideally, mixers may use both methods, providing both convenience and a sense of adventure.

Milk, all on its own, opens up a whole new range of choices. You can't simply mix cereal and think you can get away with slopping milk all over the top. Matters to consider:

Certain cereals provide an ideal basis for layering cereals, ensuring that breakfast satisfies hunger as well as entertaining the taste buds. Puffed wheat or rice, basic muesli, oat pillows, wheat squares and flaked corn or bran - all provide subtle flavours and interesting textures, without overpowering any of the other mixed ingredients in your bowl.

Rough With The Smooth

Part of the mixed cereal experience comes from texture, as well as taste. You can enjoy all kinds of interesting changes in texture and consistency from one mouthful to another just by choosing the right kind of combinations. Adding the crunch of something like Grape-Nuts in amongst puffed cereals or muesli can make all the difference; but you should exercise extreme caution in making your mixed cereal too crunchy. This Researcher experienced a shocking surprise while eating a mixed cereal, when a particularly crunchy mouthful triggered off the (probably long overdue) disintegration of a fragile molar, leading to an emergency visit to the dentist.

Wheat and oat biscuit4 cereals have the rather unusual quality of starting out crisp, dry and largely inedible, but then turning into something akin to stodgy porridge when exposed to milk. This quality provides some interesting potential to combine with crisper cereals for an unusual textural experience, using either cold or hot milk to further expand the possibilities. With the biscuit on top of a crisper lower layer, you can enjoy the transitional state as the upper layer absorbs the milk, then dive into the still crunchy layer beneath that will keep the eating experience a lively one all the way to the bottom of the bowl. A spread of fruit somewhere in-between wouldn't go amiss, either.

The Same, But Not Quite

You may be surprised to discover that sometimes combining cereal with the same broad taste may still offer a unique experience. A prime example has arisen in the UK with the introduction of a variety of different forms of chocolate-flavoured cereals to compliment the existing chocolate-flavoured crisp rice already available. While this most basic of chocolate cereals has the advantage of turning the milk brown, combining it with variations such as a larger cereal with a soft, chocolate-flavoured centre and a large, crisp, curled chocolate flavoured flake can create a satisfying (if incredibly moreish) taste sensation. Having consumed a bowl of the several chocolate cereals combined, you're unlikely to lose the chocolate flavour in your mouth until mid-morning, if not close on to lunchtime. A certain cereal producer has even cottoned on to this idea and has started producing special packs containing four strains of chocolate-flavoured cereal to allow mixing, and this idea may well trigger a serious mainstream acceptance and support of mixing cereal.

And Now For Something Completely Different

You needn't restrict your mixing to just cereal. While the central purpose of this Entry is to disrupt the taboo relating to enjoying a mildly eccentric breakfast experience by mixing different cereals in the same bowl, you can introduce other comestibles. Obvious additions include:

The Most Important Meal of the Day

If you're serious about mixing cereal, you will find a completely new world open up before you. Expect to have successes and failures, but know that the successes will prove all the sweeter and more than likely prove worthy of noting down a recipe or passing the idea on to a consenting associate. If you try to go for a balance between sensible and experimental, mixing cereal will provide you with years of entertainment and a few memorable eating experiences.

1Certain online sources suggest the existence of at least a thousand, if not more, individual fictional characters found on various brands of cereal.2Read 'stingy portions that weigh less than the packaging they come in'.3Given the vast quantity of cereal brands available internationally, this Entry will mostly avoid referencing named varieties and manufacturers.4Well, more of a wheat/oat brick actually, but generically termed a biscuit.5Almond and walnut actually fall into the category of stoned fruit, but expect to find them among the nuts in the local shop.