The Truth About Nose-picking Content from the guide to life, the universe and everything 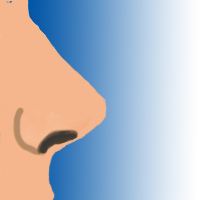 Nose-picking is defined as the act of inserting a finger (or in some cases an object) into one's own nostrils with the aim of removing a piece of dried nasal secretion1... obviously, we all know that. Nose-picking (or referring to it) in public is generally frowned upon and perceived as a disgusting, bad habit. Despite this, it is a ubiquitous behaviour. Nose-picking is practised by the majority of individuals - regardless of gender, age and cultural background. Nose-picking is, bar a few rare exceptions, harmless.

Few things are more embarrassing than being caught nose-picking. Despite the fact that nose-picking is in most cases innocuous - the only person that can possibly be affected or harmed by nose-picking is the nose-picker2 - it commonly finds less acceptance than audible flatulence or eructation (belching or burping), regardless of the socio-cultural environment3.

Few systematic surveys have been carried out to characterise nose-picking habits, but the existing studies show that the vast majority - 70 to 90% of the adult population4 - has at least once picked their nose, although only a minority would confess if asked directly, and even fewer people would admit they occasionally still do it. It can be estimated that 10% of nose-pickers also occasionally practise mucophagy (ie, the oral consumption of semi-dry mucus), but the real number could be significantly higher.

Upon closer inspection, it is possible to classify the phenomenon of 'nose-picking' in different categories.

Nose-picking usually starts at a very early age. Babies playing around with their little fingers soon discover that they have different orifices in the middle of their faces into which the finger can be inserted. So, basically the first motivation behind nose-picking is because the nose is there to be explored. Only a few years later the child will find out that nose-picking is considered to be a bad habit. Even so, children and adults will occasionally pick their nose out of boredom.

There are, however, more-or-less sensible reasons for nose-picking, such as removal of a crust of dried nasal secretion (pieces of dry nasal secretion are commonly known as 'bogies' or 'boogers', and are sometimes not as dry as assumed) that might be obstructing the nose, hurting, itching or simply hanging out of the nose giving the person wearing it a disadvantageous appearance. In fact, it is often more advisable to remove the dried secretion carefully with a (clean) finger (or a finger wrapped in a handkerchief) than trying to snort it out; snorting involves high pressures in the nasal chambers and it may injure the nasal septum if not performed properly.

In medical parlance the condition of compulsive nose-picking is called rhinotillexomania, a relatively recent word coined and analogous to trichotillomania, the compulsive desire to pull out one's hair. From rhino-' (Greek meaning 'nose'), tillesthai ('to pull, to pick'), an additional exo ('out') and mania ('obsession'). Compulsory nose-picking implies that the person doing it does not have full control over the bad habit, like notorious nail-biters suffering from onychophagia. At the date of writing, however, it is still not clear whether rhinotillexomania can be classified as a pathological or as a psychological disorder. The difference between those is faint, but in the first case rhinotillexoma is classified as a disease, that would be treated in a hospital, whereas in the second case the patient would be treated by psychologist, in sessions.

The last item in this list can be considered the most dangerous factor, as different microbes can become shuttled into the human respiratory system. Despite this, pathogenic infections related to nose-picking are found to be quite rare.

Nose-picking in young children is a very common phenomenon. Often parents seek to confront this, but find the problem hard to tackle. The central advisory guideline is: don't panic, keep calm and avoid making a big issue out of nose-picking. A more profound understanding of the problem is gained by addressing the following question: why is my child doing it?

Sometimes children are caught picking their nose because they have something, usually boogers, in their nose that they want to remove, but are too lazy or too busy to do it in an appropriate place5. In any case, children usually try to conceal the act of nose-picking and are embarrassed if they notice that they have been spotted. Raising an eyebrow, or signalling reproval in some other non-verbal form is normally effective enough to get the message across. Often nose-picking might be a symptomatic behaviour resulting from too dry an atmosphere (eg, because of air conditioning or excessive heating). In some cases it is advisable to suck or to wipe the snot out before it dries to become a pickable booger.

Busy children rarely pick their nose. At young age (between three and seven years) the simplest way to keep your child's finger out of their nostrils is to give the child something do with their hands. It is important in this case not to give the nose-picking any special mention. Making an issue out of nose-picking might cause the problem to escalate, which brings us to the next case.

Children between five and nine years often use nose-picking as a tool to catch the parents' attention ('Stop it, Brian!'). The best way to confront this is to give the child the momentary attention he or she is requesting. At the same time it is important to avoid referring to the nose-picking in a special way. Should this be necessary, however, it is important to conceal any irritation. Mentioning the nose-picking in a casual way should prevent escalation to the next level.

Children between seven and ten years discover that nose-picking can be used to provoke or (preferably) to embarrass their parents. An escalation of nose-picking to this point is, however, very rare. Should this be the case the best way to solve this problem is to keep calm so that the child learns that nose-picking does not efficiently irritate their parents. If need be, it is advisable to talk about it with the child in private. Nose-picking usually does not escalate further6, for example, to rhinotillexomania. Nose-picking usually stops being a problem between parents and children older than seven, partly thanks to peer dynamics. More serious problems associated with nose-picking, like rhinotillexomania or frequent nose bleeding, should, however, be discussed with a physician.

There are many tales and urban-legends associated with nose-picking. One famous example describes the ancient profession of royal nose-picker in the court of pharaoh Tutankhamun. Another one interprets ancient cave paintings depicting a person during the act of nose-picking. Although not proven wrong, these accounts seem to be relatively far fetched - the profession of royal nose-picker would have appeared in other periods of Egyptian history and cavemen certainly had other fish to fry than perpetuating nose-pickers.

It has been reported that some people have developed tools to aid in nose picking. A well-sorted ENT7 clinic will not lack in tools to remove objects from a person's nose.

Nasal mucus, the stuff bogies are made of, is an excellent and very sticky lubricant. Its function is to coat the inner part of the nose to trap dust and dirt that might be in the air.

Nose-picking is common among primates.

People who catch you picking your nose may say the following:

Nose-picking, a lowly subject, has often been used in defamatory propaganda - clearly, to invoke the notion that (place your favourite enemy here) is a barbarian brute.

A paediatrician's advice on the subject of nose picking can be found at www.parentkidsright.com

For more information, enter 'Rhinotillexomania' in the search engine of PubMed.

1Note that nose-picking stands in opposition to snorting, sucking or wiping mucus from runny noses.2Under the tacit assumption that the picker is picking his or her own nose.3Note, for example, that eructation is not seen as something impolite in some parts of the world.4See, for example, Andrade and Srihari. J Clin Psychiatry 2001;62:426-31. Following the publication of this article, the authors received an IgNobel prize.5That is, the bathroom if the child is old enough, or with some parent's aid if the child is younger.6Regardless of this, the psychological pattern (ie, the desire to irritate parents) might still be an unsolved problem.7Ear, nose and throat.