Sleep and Teenagers Content from the guide to life, the universe and everything 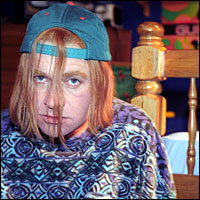 Is your teenager obnoxious, a pain in the bum, a trial to live with? You need Teenfoil, the revolutionary new chemical change agent. Simply slip a capsule into your unsuspecting teen's favourite beverage and watch the transformation from boorish oaf to agreeable young person.

At times it can seem that 'pleasant teenager' is an oxymoron, with the emphasis on moron. There may not be - as yet - a magic transforming formula called Teenfoil, but there is a natural change agent that may be just as good - sleep. Teenagers need up to nine hours' sleep a night, but few get it.

Changes in Mood and Motivation

According to research, changes in mood and motivation are among the most important effects of sleep loss, which can exacerbate behavioural and emotional problems. Sleepiness is also associated with brief mental lapses or 'microsleeps', a tendency that increases the risk of road accidents. According to Ronald E Dahl, Associate Professor of Psychiatry and Paediatrics at the University of Pittsburgh Medical Center,

Irritability, moodiness and low tolerance for frustration are the most frequently described symptoms in sleep-deprived adolescents. However, in some situations, sleepy teenagers are more likely to appear silly, impulsive or sad.

Lack of sleep makes everything hard work: it takes increased effort to perform the same cognitive, emotional and physical tasks. Teenagers may have no problem coping with lack of sleep while performing highly simulating activities such as skateboarding or playing computer games, but during periods of low stimulation - attending class or reading a book - the effects of sleepiness are most felt. Teenagers may not even be aware that they are experiencing short gaps in attention and responsiveness. Tiredness can make it difficult to initiate tasks that are deemed boring or tedious, especially if they relate to abstract or long-term goals.

One major factor to emerge from studies of adolescents and sleep deprivation is its impact on mood. Dahl says:

Not only does there appear to be greater variability in emotional states following sleep loss, but there also appears to be less control over emotional responses in many adolescents. For example, if faced with a frustrating task, a sleep-deprived teenager is more likely to become angry or aggressive. Yet, in response to something humorous, the same subject might act more silly or inane.

Sleep deprivation can sometimes mimic or exacerbate symptoms of ADHD (Attention Deficit/Hyperactivity Disorder) including distractibility, impulsivity and difficulty maintaining attention. (In fact, ADHD symptoms are more frequent in children with sleep disorders.) One researcher also found that tasks that required creative or flexible thinking were sensitive to sleep loss. One survey showed that adolescents who get less than six and a half hours' sleep each school night or report a two-hour difference between school night and weekend bedtimes have a higher level of complaints about depressed mood than adolescents who get more sleep.

Lack of sleep can't be blamed for every adolescent problem, but getting enough sleep may make a difference. As this Researcher always says, you only have to look at the circadian rhythm of a juvenile diurnal mammal such as the Peruvian degu (Octodon degus) to realise how important sleep is to adolescents. The trick is to get teenagers to close their eyes. Although the rest of us operate on a 24-hour cycle or circadian rhythm, the internal clock of the typical teenager runs much slower, on a cycle of 26 to 30 hours. It's no use telling them to go to bed at 11pm because their internal clock is showing only 8pm. When the alarm goes off at 7am, their body tells them it's 4am. Groggy with sleep, they drag themselves to school.

School may be specifically arranged to meet their learning needs, but the timetable is set out for the convenience of adults. A more reasonable school starting time for teenagers would be 10.30am, whereas younger children could probably benefit from starting an hour earlier. In the US, some schools have experimented with later starting times and found that it had a positive impact right across the school. Teachers found that students 'seemed to be more engaged in what they were doing, they seemed to he more focused'.

The nocturnal habits of the common teenager is something that concerns sleep researchers around the world. Recently, (2001) an international conference called 'Contemporary Perspectives on Adolescent Sleep' had experts nodding over papers such as 'Sleep Patterns and Daytime Functions in Italian Adolescents' and 'Adolescent Trends in Delayed Phase Shift in Rhesus Monkeys' (the habits of the adolescent degu also featured in a paper).

In a frenetic age that takes a perverse pride in sleep deprivation, it's little wonder teenagers are among the worst affected. Technology has enabled us to travel faster, communicate faster and prepare food faster, but no one has discovered a way to sleep faster.

A New Zealand website sleepwell developed by Lower Hutt psychologist Ross Gilmore promises to have you nodding off in no time. And for everything you always wanted to know about sleep but were too whacked to find out, the place to go is sleephomepages