Finding the Perfect Shower Setting Content from the guide to life, the universe and everything 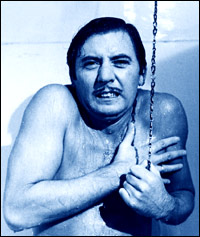 For any hitchhiker, traveller, holidaymaker or plain old dirty stop-out1, being able to obtain optimum showering conditions is a very important skill to possess. Whether using your own shower, one belonging to a friend or family or using one in a hotel, hostel, campsite, or even your local swimming pool2, it is always satisfying to be able to adjust the shower to your own needs.

Ever since the shower was first invented people have been struggling with the seemingly simple task of spraying themselves with water and making it a comfortable experience. In ancient times people would make do with standing in a river and using a bowl or some other receptacle to pour water over their heads. This may have been pleasant in the tropical sunshine of some countries, but in the sub-zero temperatures of others, people were probably quite content to stay dirty for a while longer. Richer people tended to favour having their servants pour warm water over them using jugs, but it wasn't until the advent of plumbing that washing yourself while standing up became an art form in itself. Although technology has improved over the last few thousand years, showering hasn't really become much easier and it is still a challenging pastime which takes much skill, patience and usually a lot of luck. Although it is a truly ancient skill it has never been officially accepted as an art form. The closest it got was probably when Douglas Adams and John Lloyd gave it the name alltami in their book, The Meaning of Liff3. In reality, there is nowhere you can go to learn this skill but there are those (alltamists) who are secretly fanatic when faced with a particularly awkward shower. As it's really a self-taught art, the aim here is not to teach the reader the secrets of alltami, but to highlight some of the main features and hazards to look out for.

For the purposes of this article these have been split into three elements:

Before these are discussed there are a few basics that should be mentioned.

It is either a complete novice or someone with complete faith in their shower who stands under it while turning it on. Although this may seem obvious to the experienced alltamist it is just one of the basic guidelines, which should be kept in mind before 'jumping in' and practicing your skills. To prepare the shower area, the showerer should ensure that any shampoo, shower gel, conditioner or other showering products are all placed on an even surface within easy reach. As is common practice for a hitchhiker, the showerer should know where their towel is, but they should also know that it is clean, dry and close enough to the shower to reach, but not so close that it gets soaked. In some shower areas this could be extremely difficult, but we will go into that later.

From the skills of balancing the water temperature and pressure, keeping balance physically and maintaining a temperature balance in the shower room4 to simply having a balanced mind; balance is the core aspect of alltami. The more control the showerer has over his/her environment, the easier it is to obtain balanced showering conditions. The worst scenario (or biggest challenge) would be in a freezing cold room (eg, in a hotel) with an unfamiliar shower with a fixed head and no space to avoid the water while struggling with temperamental taps. On slipping and sliding out of the fully-tiled area, the showerer finds their towel soaking wet on the floor as there was nowhere to hang it and the in-floor-drainage is cleverly positioned at the highest point of the floor, directing most of the water out of the door. Of course the average alltamist doesn't expect to be able to alter the drainage schemes in all the showers they encounter, but the one thing that it is natural to expect is some kind of control over the taps.

This is where it all starts to get complicated. There are many different types of shower and various styles of taps, dials, buttons and switches that have various functions. A major aspect is the wide variety of different methods that hot water can be supplied.

If the water is heated by passing through a gas combi boiler or by being heated in a tank such as an electric immersion heater then it may not need to be heated by the shower unit (although it still might be). In this scenario it is common for the only controls to be taps. In rare cases these are bath taps with a Y-shaped hose attached by two rubber seals on one end and with a shower head on the other end5. More commonly nowadays there is a lever that diverts the water flow from the taps to a hose, which is permanently fixed between the taps. Both methods have a habit of allowing water to dribble from the taps while the shower is on, and sometimes this dribble can land quite heavily and annoyingly on the showerer's feet. More seriously, some of them dribble either scorching hot or freezing cold water.

In this case there are a few factors the alltamist needs to consider. Firstly, the pressure in the hot tap may not be very strong so a good tactic could be to turn this on full and then fine-tune the cold tap until the right temperature is reached. Of course, if the pressure is too great then the showerer has more of a challenge and has to turn both taps down, trying to maintain the temperature balance. This could involve getting in and out of the shower a few times to check pressure and avoid being scalded or frozen. Unfortunately, there is another way of being scalded that is harder to avoid with these showers. The problem is that the shower is not the only outlet for the hot and cold water as it is usually on the same system as the kitchen sink or a second WC. Equally, the other water users in the building can be just as unpredictable as the shower and are often harder to control. They have the unfortunate habit of flushing toilets and turning taps, which can render the last five minutes of work futile. Announcing your impending challenge to everyone in the house may seem like a good tactic but it generally makes little difference since flushing is a habitual action. Another problem that only applies to the immersion heater is that it could run out of hot water!

Modern electric showers can be easily divided into two categories - those with pumps and those without.

Those without often have one dial which turns the shower on and changes the temperature. An odd quirk of this dial is that more heat often means less pressure. This is possibly due to the water being slowed down, as it passes the element and so can be heated properly. Triton make a shower of this type which seems to have taken its design influences from Microsoft Windows because the shower is switched off by turning the dial to Start.

Electric showers with a pump can come with a handy on/off button so that the pressure and temperature switches/dials can be left at their desired settings. Some of these showers (probably the cheaper ones) still have the more pressure/less heat problem as the models without pumps.

Safety is an issue at all times when showering, but it often takes old age or disability before people decide to install a grab rail. There are other ways of promoting a safe shower environment; rubber mats, fluffy mats, cork mats and carpets to name a few, but a simple way of avoiding slip-related accidents is to dry yourself before leaving the shower or bath. One complication, though, is the involvement of another person. This could be a parent or carer, or if the showerer is lucky, it could be a partner and co-showerer. Two people moving about in a shower or bath is a tricky business and for safety purposes good communication is vital. Remember element 1 - ALL, keep a balanced mind and you will keep your balance. Happy showering!

1A term for someone who stays out all night without a change of clothes, usually sleeping on someone's couch after much consumption of alcohol.2Many showers in swimming pools have a fixed temperature and pressure and the only controls are the movement of the shower nozzle and the on button that slides back to switch it off seconds later. Due to this it is only the physical balance and safety elements, which require any skill in this case.3The Meaning of Liff is a book that uses the names of obscure places around the world as words for concepts, which most people understand but haven't previously had a word for.4A room isn't a bathroom to a dedicated alltamist unless there is no shower.5Sometimes there isn't even a bracket to hang the showerhead onto the wall as it's only used for washing hair while in the bath - sacrilege!