Great Cold Drinks Content from the guide to life, the universe and everything 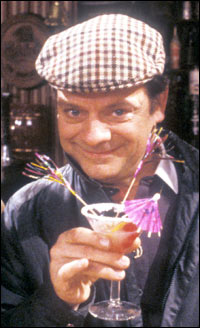 When summer arrives here in the UK, we begin to face a whole raft of new problems and, with them, opportunities to moan. As our weather is so unpredictable, we never seem to be prepared for the few days each year when it actually gets sunny and hot. Public transport becomes unbearable, patches of exposed flesh tend to go bright red, and sales of ice cream go through the roof.

Now there's nothing better to help a hot day fly by than a cold, refreshing drink. We've scoured the h2g2 Community and found out their favourite refreshing cold drinks.

Mix together equal measures of cold black tea and apple juice. This has a pleasantly sweet taste and a refreshing dry finish. If it seems a bit ascetic to your taste, try the more sybaritic delight of the next one.

Make lots of espresso and chill it in a tall glass. Float a scoop or two of your favourite ice cream in it. Top with whipped cream. Serve with straw and spoon, and you have created what you might translate from German as 'Ice-Cream Coffee'.

Take a pan, fill it with water and put it on to boil over a medium-high heat. When the water starts to boil put in six (at least) tea bags of any brand, then cover the pan. While the tea is making, get a large dill pickle jar and add in two cups of sugar. Leave the tea to brew for between 20 minutes and one hour. When it is dark enough for your taste, pour the hot tea into the jar and stir till the sugar is dissolved. Now you are ready to enjoy, so fill a glass with ice and pour the tea. It can be kept in the fridge for a day or two.

Lemon juice or slices of lemon can be added to taste.

Note, not that fizzy stuff that the Brits call lemonade, but real lemonade, or 'Citron Pressé' as it is known in France. Lemons, sugar, water (with a dash of angostura if you want an alcoholic drink!). Or even limeade (using limes instead of lemons). Served ice cold, with lots of ice, it goes very well with Pimm's.

Fizzy lemonade can also be livened up with a slice or two of lemon.

Both of the below are great for people who don't like sweet drinks and should be served with ice. They are both delicious. There is apparently something about mixing orange juice with a bitter fruit flavour which makes it so much more refreshing, especially when there are bubbles as well (as with bitter lemon).

Many people do like cola drinks, however cola has a large amount of sugar in it, and it also contains caffeine. As caffeine is a diuretic, so drinking it means you lose more water than you should - so it's not going to hydrate you as much, either.

Also recommended is a lot of water. It may be a cliché, but we should all drink a lot of it, especially in warm weather.

Drinking alcohol dehydrates - so it is not a good idea in hot weather to overdo it.

Fill glass with ice cubes and swirl a shake of bitters in it (tip out if you don't like bitters, leave them in if you love them). Add about a shot of lime cordial, then fill with lemonade. Drink and feel your troubles melt away. Delicious, fast to make, and cheap.

For later in the day, cider (served ice cold) is always nice. A word of warning about cider, because it tastes so sweet you can drink a lot of it in the hot weather without thinking too much about it, and get quite drunk on it, and then there is the hangover in the morning. So cider after about 6pm, lemonade before!

One of the best cold refreshing drinks found in recent years is Pimm's No. 1 mixed with lemonade. It's an absolute classic of course. For the best Pimm's, make lots up in a big jug with plenty of ice and chunks of fruit, then leave it for a while for the fruit flavours to spread. Fruit to involve varies (apple/orange/lemon/lime/strawberry), but always add a sprig of mint. Cucumber is another option. If you have the herb borage in the garden apparently it is traditional to put borage flowers in the jug as well. For those with less of a sweet tooth, Pimm's and tonic is a good alternative.

Gin and Tonic, ice-cold tonic, of course, with a little ice and a juicy slice of lemon or lime.

Very refreshing on a hot afternoon, and since many people can only ever afford about two, this eliminates the falling over problem beer-drinkers experience.

Basically rum and soda water, with lime juice, a heap of crushed ice and a handful of crushed mint leaves. Some recipes add sugar cane juice to taste.

This may not be available premixed outside of Australia, so here's the recipe:

Mix together Green Ginger Wine and whisky (Scotch is classic, but other whiskies are probably fine) in roughly 50-50 quantities, or according to taste. Add ice and lemonade to drink.