If you thought my name was dumb, just wait until you see this slogan!

"If you're not dreaming, then you're just asleep." 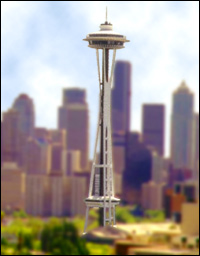 Hey everyone. (So how else should I start this thing) I'm Dan. From Seattle, Wa, USA, Earth, (What a dull name!), Sol, Milky Way, the physical universe. I used to live and work on a nuclear submarine based in Norfolk, Va, USA, etc. etc. Strangely enough, with a hull number of SSN 723. (C'mon, what do you get if you multiply seven by two by three.) For fans of The Shining, what with Room 237 and all, we called the boat Room 723. If that helps clarify our opinion of it. I am now gloriously unemployed, at least until the circus comes to town... I enjoy reading, sleeping, sky diving, scuba diving, and various other high risk activities. (Except Knitting) If you have questions about life on a submarine, feel free to go rent "Das Boot". If you still have questions, go ahead and ask. Just remember, some days it was Peaches and Creme, some days it was Sugar, Honey, Ice Tea. S-H-I-That's right!

I also get into the occasional Lightsaber duel. Mostly with people who try to spell it lightsabre. En Garde!

I got it at the Store

Um, well. You've been introduced. Anyone still reading runs the risk of talking to me, so now is a good time to run out for a drink...

Activities and Interests I am a Warrior of the Light

Join us, and stand against the coming darkness!

I am a co-founder of theMasters of the Multi-verse

Join us, or one day you will turn around to find a squad of Fanatical Death Chickens!
Bwahahaha!

These are the badges I have earned in service to the MotMV, even though I take credit for all the operations we undertake. Except the tearoom. That one ain't my fault!


I am a Keeper

I am the Keeper of annoying habits like using an elevator to travel only one floor or being given a knife but still trying to cut your pancakes using only your fork. I apologize. And sympathize. I just really dig on Pavlovian response.

I am a member of the Random Quote Guild Need some inspiration?

I am a member of the Northwest US Researchers Group

All you rain-addled coffee buzz monkeys and tech junkies, say yo!

I am a member of CAVE

We demand the freedom to express ourselves, misguided as it may be!

I am a member of the United Bedroom Confederation

End Sockism in our time!

I also may be, or may not be, an official Confusionist

If you want to join, go here.Or maybe not...

And since you never know who is having a birthday, drop them a note. Then grab some of their cake!

Currently, living in and around Seattle, somewhat subsidized (ameliorization of On Welfare). And I am also fantastically in love with Yael, AKA, Lady Pennywhistle. After something of a hiatus, Haikeeba! returned from out of the blue... well, actually, from Japan, and I was immediately persuaded to resume posting regularly. This was on or around March 3 of 2005.

Being one of the founding members of the Masters of the MultiVerse, I soon ran into LP as chaos broke out in the 9300 block of the old new tearoom.

We have talked much since then, and began exchanging e-mails. Then on or around July 3, we somehow decided to stop avoiding those three little but devastatingly huge words, and I have been head over heels in love ever since.

Then in February 2006, I boarded a plane and flew to Israel, and stayed with Yael for 3 of the best weeks of my life. Until next time.

And was fantastic. As was the third time we were together, in Jan/Feb of 2007. As will be all the next times.

So since I'm apparently supposed to defend her honor, and keep people from picking on her, and stuff like that, then if you want to do that, you'll have to get through me first.

So go ahead. You have my permission. Tell her I said 'Hi!'.

Just kidding. I love you, Yael.

Okay, I got links I like to go to, and then I got interests and other stuff, so standby!


Links (Fun and Games) ...I should really just make a links page to put all these on. ...but I only get like, one visitor a year here, so don't really care who I'm inconveniencing by doing it this way. ...Maybe that's why I get so few visitors...

Things that aren't links, but probably should be, because I find them interesting.

Okay, okay, so it's all one big link, but that's just to save time and space. Actually, those two are defined in physics as one and the same, so basically, I'm saving spacetime. BOOYAH!

And in case you are one of those people who feels compelled to read the entirety of an intro, or just want to see what I look like, then I look a little bit like this guy. That's because it's me! The one in the midle, anyway. Surrounded by some of my brothers and sisters. I also have this on my leg. Freeow!

Let's take a minute to remember why we're here!

NuclearConfusion -Not a lot of money in the revenge business