Dispersing a Crowd Content from the guide to life, the universe and everything 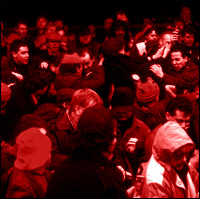 There are many reasons that a crowd may form. Many reasons are entirely well-meaning - such as festive occasions, sporting events, large store sales, family reunions, or the occasional car accident. But there are also many undesirable circumstances under which a crowd will congregate, including crimes, scandalous behaviour, Paris Hilton sightings, and sporting events. The crowd can consist of any demographic imaginable, from hordes of scoop-hungry news reporters to destruction-bent hooligans throwing a zoot suit riot, to tree-huggin', sign-wavin', letter-writin' peaceniks to filthy strung-out hippies who just won't leave no matter how hard you try.

One ever-present option is to send out the troops and club 'em like baby seals, but this is generally looked down on, as there are usually enough cameras floating around a determined crowd to take pictures that will make whatever scandal the crowd was there for in the first place yesterday's news.

So since 'violence' is plan B, a peaceful alternative is needed. You need to make the crowd want to leave. But how? You've refused to give statements, declared your innocence, stopped dumping toxic waste in the river, and stopped feeding those hippies weeks ago. Well, breathe easy, friend - with one of these easy procedures you can end your siege status in no time!

A longtime favourite of many police agencies, spraying a cloud of impending discomfort into an unruly mob is a low-cost and highly-effective dispersal method. The workhorse of the pack is tear gas, also known as CS or Ortho-chlorobenzalmalononitrile. A relative newcomer is PAVA, a synthetic version of pepper spray. The newest version is the Pepperball system, basically a paintball-like globe that bursts a small cloud of PAVA on impact.

Both of these chemicals cause temporary severe respiratory irritation, runny eyes, nose, and general panic.

The deployment of an aerosol is always hassled by sudden changes in wind direction, often blowing the gas away from the crowd, or even towards your position. It can also lead to massive panic, resulting in tramplings of those too slow to get out of the way. Nothing sadder than watching a pack of crazed fratboys run down an old lady. In addition, what with the popularity of the sport of paintball among riot-prone individuals, you may be using Pepperballs only to start seeing return fire. But don't worry, you'll just get hit with paint. They've got another thing comin'!

Note: This researcher can personally attest to the effectiveness and incapacitating nature of teargas (having been exposed during Navy Boot Camp) and Pepperballs (having been shot several times during the WTO demonstrations in Seattle, 1999 - the system's first official usage).

The ever-popular Knockout Drops of many a spy drama have a basis in real-life crowd control. Many chemicals - from sedatives to anesthetics to muscle relaxants - have been used to either sap the willpower and fight from a crowd, or just konk 'em out all together, so they can be hauled away by wheelbarrow at an opportune time.

Again, aerosols are unpredictable, and have a rather unpredictable nature. In October 2002, a Moscow theatre was besieged by guerillas who took 800 people hostage. During the subsequent rescue effort, the chemical fentanyl was pumped into the theatre to knock out everyone peacefully, but resulted in the deaths of almost 130 of the hostages.

Many diehard fans of football/soccer will tell you the game isn't over until the hoses show up to send you on your way. A very simple method of breaking up a mob, just get a fire engine or specially made water cannon to blast some icey on the crowd.

This method can sometimes be very dangerous; some water cannon have been known to knock bricks out of walls. If a small child were to be hit with the full force, the results could be disastrous. Also, spraying water everywhere makes lots of mud, and that will just attract punks and slip-and-slide hopefuls who will have a big party like what happened at the Woodstock festival recently. (Strangely, just before the crowd burned everything down...)

Speaking of slip-and-sliding, there exist several potent brews that will, when sprayed over virtually any surface, reduce the friction to virtually zero. The result will be a crowd of slippery people writhing around, unable to stand up. Just get a push broom, and sweep the crowd home! Then go and play some Spy-Hunter on your Nintendo. Oil slick!

While recently several water-based versions have been introduced, using an anti-traction system used to mean having a slick spot for the rest of eternity, since anything oil or grease based would be nearly impossible to wash off when you were done with it. Also, you will inevitably attract youngsters who will run to the edge of the slick and try to slide all the way across. You should have a rope handy in case someone only makes it to the middle and becomes trapped.

At the other end of the spectrum, get a tank full of rapidly expanding adhesive foam and you've got an instant barrier. This can be used against doorways or in halls to make passage impossible.

This was originally made to shoot at the legs of a charging assailant to slow him down (à la Spiderman), but was determined to be very difficult to breathe through, but oh-so-fun to use to completely encapsulate a suspect with; a dangerous combination. Also, when the crowd is gone, you gotta have at the new wall with a hammer and chisel to get it out of the way.

A long-time favourite of various armies against insurgent guerillas, and more recently the main weapon found on the streets of Nashville, Tennessee, playing incredibly loud, incoherent noise or static for days on end will soon send anyone packing, tired and deafened.

This is a bit of a two-edged sword. Even with directional speaker technology, you will inevitably be forced to listen to the same cacophony you are subjecting your victims to. Also, you run the risk of attracting people who actually like hearing you are playing, so you'll have to get rid of them some other way1.

A product of a damaged mind sometime in the 1960's, it was found that if you pumped low frequency sound at a crowd, in this case unruly college students, you could get all sorts of interesting results. The slightly queasy feeling you get at a parade when the band goes by and the big drum gets hit led to experiments which soon discovered that sound at around 12 Hertz (12 beats per second) would send the human bowels into overdrive, resulting in a mass rush for the nearest bathroom.

Two things. First, go to the bathroom before you try this, cause there's gonna be a line afterwards. And second, 'CLEAN-UP, AISLE THREE!!!' Enough said?

If you've ever been driving and caught a deer in your headlights, you probably thought, 'Dumb deer. A bright light wouldn't make me stop!' Wrong again, sport! Many police use a handheld laser emitter called a 'Dazzler' that blasts out random pulses of intense green light. When directed at a suspect's face, the result is a temporary loss of vision, severe headache, and disorientation.

In any given crowd, chances are someone has some degree of epilepsy. This is a good way to find out exactly who it is. You may also attract oodles of moths and mosquitos with a volley of light. You've been warned.

Here's a method any elementary school student would be proud of. Light off a couple of stink bombs into a crowd, and the only ones left will be the hygenically challenged and those without noses. Many chemicals have earned their stripes against rioters, among them Cadaverine and Putricine. And no, the names aren't coincidental!

The smell of rotting flesh and faeces is a surefire way to gather lots of vomit, and it has a habit of getting into fabrics and even wigs - no amount of washing will help. Sorry man, burn the shirt. Additionally, you'd better get used to living surrounded by carrion birds and flies until the smell dissipates.

If the whole world is watching your every move, distract them by dousing the news crews with bug juice! Used against enemy troops in combat to instill paranoia and confusion, this will turn even the most resolute crowd into a mob of laughing, dancing idiots.

While hilarious for you to watch, obtaining large amounts of suitable chemicals is difficult, and not to mention illegal in most countries. And if you have a tent full of hippies camping out on your lawn and they find out you're giving the stuff away, they won't ever leave!

Prevention is the Best Medicine

Then again, probably the easiest way to avoid becoming a prisoner in your own home or office is to not do anything that would attract a crowd in the first place. So don't be a bad person, do anything wrong or shocking, don't be famous or well liked, don't really say or do anything that anyone will see or hear... sounds like being a prisoner that way, too. Well, the choice is yours. Just remember, violence only breeds violence, so if you want some privacy, give 'em a load of non-lethal fury and watch 'em run.

1Historic event: A mall in the midwestern United States was 'besieged' by punks who deemed the entrance to be a good hangout for listening to loud music, smoking, and fighting. Realising the den of miscreants was affecting business, the mall management tried many methods of preventing the urchins from loitering outside. Eventually, several speakers were set up, over which came a constant barrage of the soft croonings of Frank Sinatra. The entrance was abandoned within a week.