On Saturday February 18th 2012 (and the preceeding Friday night) there will be the first h2g2 Community Meet not only of 2012, but of NooHooToo.

This winter will be the first opportunity for one and all (and I'd much rather it was all than one, otherwise I'd be very lonely) to get together and raise a glass, but this time not only to absent friends, but also to Us. To the future of the Guide.

We will be able to sit together, look back upon what we've achieved so far and be amazed, and what we've got to look forward to in the future, and be slightly scared.

This will be a good excuse for a drink, like we've ever needed one of those.

So when and where will this Meet to Restart All Meets be?

By popular demand (with eager encouragement from me) the meet will be in Manchester, on Saturday 18th February. As the title of the page may have given away.

Drinkers and Hard Core Hangers On 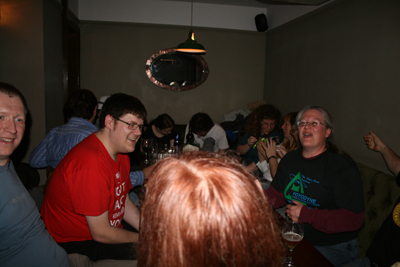 Several people will be travelling to Manchester a day or two before the meet up and rather than leave them at a loose end, wondering which pubs and restuarants, museums and art galleris to go and research for Guide entries we'll be continuing a custom that has grown up around the meets. We'll be having a pre-meet.

Rather than give some people fore-warning of what the venue for the Saturday will be like, and to show off more of what's great about the city hosting us, the Friday pre-meet will be in Port Street Beer House

It's on the edge of the trendy "Northern Quarter" in the heart of the city and is famous for its love of beer, friendly, enthusiastic staff, and being full of hipsters, designers and developers. Yes, it's a Stylish Nerd haven. So we should fit right in.

The disabled facilities at Port Street Beer House aren't the best. There is a loo downstairs, but the majority of seating is upstairs.

Given the numbers that have signed up for the Friday night, I'm afraid that we'll have to be upstairs, else we'd take up too much room downstairs.

The staff have been forewarned, and they've even relaxed their no large groups, as long as we promise to behave.

The pub opens at 4pm, does not serve food, but does take card transactions over £5. If you're in Manchester before then and are at a loose end, a few are planning to go to A Bar Called Common for a bite to eat first, possibly arriving from not long after noon.

You might have picked up on the fact that Port Street is my local.

Because All Day Drinking Isn't Good For You (apparantly)

For the Saturday itself the plan is to go en-masse to the Museum of Science and Industry which has lots of planes, trains and other industrial and scientific stuff.

To give people a chance to recover from the Friday night, and to not rush those travelling in on the Saturday itself, we're looking at meeting outside the main entrance to the Museum at 2pm.

There is a pub across the road called Cask that opens at 12 noon and would provide a good venue to meet before hand for those that fancy a liquid lunch, again, they don't do food but there is a chip shop next door.

If you don't fancy the museum you could just staying in the pub if you feel like it, but be warned the pub does not do card transactions. It's cash only.

They too have been forewarned, dedicated research has shown that although this pub can get busy of an evening, it's usually quiet on a Saturday lunchtime if neither football team is at home. And they're not that weekend so we're likely to have it to ourselves.

For the main meet in the evening we have arranged to have a fair proportion of the downstairs at Font Bar. The area we've got may be downstairs, but they've got a small lift to all floors.

The staff here are really looking forward to having us (Down 2legs!) and will be reserving the tables from 6pm to 9pm then we get to keep what we've got. Feel free to turn up earlier if you like of course, it is a pub after all.

They have good beer, both draught and bottled, proper cider, and a range of £2 cocktails. They also have a hefty discount (25%) on draught ales for card carrying CAMRA members, so if you're weird enough to have a CAMRA card, do bring it.

We've had a chat with a local brewer, and there should be a beer brewed just for us and on sale in the bar that evening. It'll be a light 4.2% (og 1042) beer using Stella and Galaxy hops. And if it's anything like his other beers, will be gorgeous.

As has been said, this pub does a range of cocktails and is rather well known amongst it's large student customer base for them. The lads and lasses who run this place have also agreed to extend their menu for one night only and serve Gargle Blasters. They won't be £2 I'm afraid, but given the amount of booze in them, and how gorgeous they are, they'll be worth it.

This place does serve food, until 8pm, and I can vouch that it's good quality and not expensive with a range from a bowl of chips to a full meal.

There will be a prize for the best name badge.

Even though several of us have met in the past, it's hard to tell what us internet weirdoes actually look like. We'll know we're us, that much should be obvious. But which of us is which?

This is a problem that no longer has to blight our drinking, sorry, socialising. The wearing of a simple name badge can solve this dilema. However, we're not simple.

So, make you name "badge" as flambouant or subtle as you like. The one judged best on the night will win a prize!

There will be a quiz

In true traditional style of the meets there will be a quiz. It won't all be about h2g2, or even the books, radio, tv series and film. Although you can probably be safe in assuming that at least some of it will.

Given how long these things can take, it'll be started promptly at around 7pm and be limited in length. So make sure you arrive on time, and we'll make sure you get enough socialising in.

A differnt prize will be available.

So, sign up below and let us know you're coming along! We can truely use this as an excuse to celebrate the saving of h2g2, and get right royally pished.

Hoopy Froods Who Can Attend

Is there anything else I need to know?

If you haven't attended a meet-up before or even if you have been to every single one, we have collected a few guidelines together to make sure we all have a safe and happy time.