The Hutchinson Family: Protest Singers of a Different Time Content from the guide to life, the universe and everything 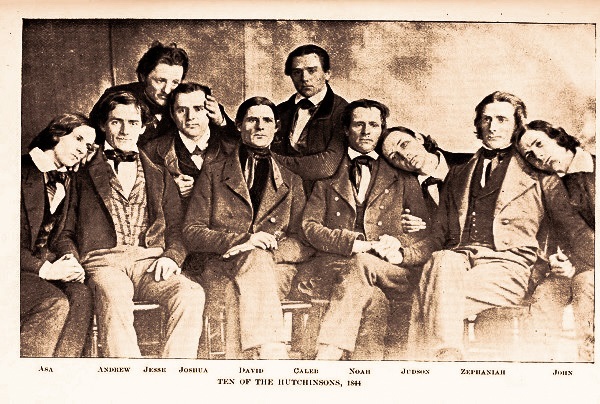 Men of various predilections,
Frightened, run in all directions,
Merchants, Editors, Physicians,
Lawyers, Priests, and politicians,
Get out of the way! Every station,
Clear the track, Emancipation.
– To the tune of 'Old Dan Tucker'

'Pop Singers Banned from Entertaining the Troops Due to Controversial Lyrics.' Sound like a story from the 1960s? Or today? Wrong. Try 1862. The group caught up in the scandal was the famous Hutchinson Family. (They were famous then.) The scandal the controversy unleashed affected relations between President Abraham Lincoln and his then-general and later political opponent, George McClellan. Let us examine the controversy by answering a few questions.

Who Were the Hutchinsons?

David, Noah, Andrew, Zephy1,
Caleb, Joshua, Jess and Benny,
Judson, Rhoda, John and Asa,
And Abby are our names.
We're the sons of Mary,
Of the tribe of Jesse.
And we now address you
With our native mountain song.

An ancestor of the Hutchinson Family brought the first plough from England to New England back in the 17th Century, and the clan had been there ever since, mostly living in the 'Old Granite State' of New Hampshire, but also in Massachusetts. They farmed, kept store, and worked at other jobs, from printing to music teaching. No matter what this numerous clan did for a living, though, they did it with a song on their lips.

If any of the 16 children of Jesse and Mary left to go on a trip, they sang their farewells to each other. When John, Judson and Asa wanted their sister Abby to leave her stockbroker husband to take care of himself and go back on a road tour with them, they serenaded under her window – and she replied in song. They were the singing-est people in New England. Different family members also played violin, viola, cello, bass, and/or melodeon. That melodeon was even played in the White House – Lincoln's piano was way out of tune.

The Hutchinsons began singing in public when all 13 surviving members of the family2 sang at an anti-slavery rally in Boston in 1842. After that, they built a career and a reputation. Various family members – mostly five of the younger ones: John, Judson, Jesse, Asa and Abby – toured venues from New York City to Buffalo. In 1845-46, they toured in England, Scotland, and Dublin, Ireland. They met Mr and Mrs Charles Dickens and other notables. Later, they toured 'The West', meaning Illinois, where they supported Abraham Lincoln in his bid for the presidency.

What did the Hutchinsons sing about? Their repertoire included:

We said this stuff was popular, not that it was any good.

Where Did the Hutchinsons Stand, Politically?

The Hutchinsons were enthusiastic about a number of causes: abolition (anti-slavery), temperance (anti-alcohol), and women's suffrage. Some of them were Spiritualists, and several family members had premonitory dreams and visions. Others were convinced of the accuracy of phrenology, the 'science' of measuring heads to tell important things about human nature. They had friends in utopian communities such as Brook Farm; John Hutchinson called his friends there 'communists', and he meant it in a good way. The Hutchinsons sang at Brook Farm, a sort of early Woodstock (without the drugs).

While in England, the singers found out they had accidentally imbibed alcohol at a banquet. Overcome with remorse, they immediately signed a solemn pledge, renewing their vows never to touch the Demon Liquor. Hutchinsons took the 'pledge' very seriously, indeed.

The 15 years before the US Civil War were the most polarised in the history of the country until the 21st Century. Here are some fallacies about that period that can be debunked by a reading of the Hutchinsons' family story:

As you can see, there is still a lot of revising to be done in our understanding of US history.

How Did the Hutchinsons Play a Part in the Leadership Struggle in 1862?

We wait beneath the furnace-blast
The pangs of transformation;
Not painlessly doth God recast
And mould anew the nation.

These lyrics come from a poem by America's 'good gray poet', John Greenleaf Whittier. Whittier was very popular: his 1863 poem 'Barbara Fritchie' celebrates a 90-year-old woman in Frederick, Maryland, who refused to let Stonewall Jackson take down her flag. This poem became a staple in schoolbooks for at least a century. It was common in the mid-19th Century to take poems and set them to music: Whittier said he was honoured to find that his poem could 'sing'. Union generals weren't impressed, though.

In 1862, the Hutchinsons were in Washington, DC, singing at various venues, including the White House with its terrible piano. Lincoln enjoyed the singing, but not everyone did. At least one pastor refused to let them perform in his church, and the YMCA made trouble about the abolitionist songs, too.

The Hutchinsons asked permission to entertain the troops camped across the Potomac. Simon Cameron, the Secretary of War, gave them a pass. The armies were pleased with the free concerts – at first. But when the commanding generals found out that they were singing 'abolitionist songs', they were not happy. The singing group received this curt order:

GENERAL ORDERS, No. 3.
By command of the Major-General Commanding U.S.A. the permit given to the Hutchinson Family to sing in the camps, and their permit to cross the Potomac, are hereby revoked, and they will not be allowed to sing to the troops.
By order of Brigadier-General Franklin.
J.C. JACKSON, A.D.C.4

The Hutchinsons were given to understand that this order came 'from the top', that is, from General McClellan, commanding the Army of the Potomac. When they got back to Washington, they reported this (quietly) to Salmon P Chase, Secretary of the Treasury. Chase asked them to copy out the words to the offending song. He took the words to the next cabinet meeting. He reported back that Lincoln said that was just the kind of song he wanted the soldiers to hear, and they should keep singing.

John Greenleaf Whittier himself had this to say about the incident:

...I do not think it strange that a Quaker's song should be thought out of place in the army.

In November 1862 McClellan was relieved of command.

John Hutchinson may have overestimated the role of his singing group in bringing about the downfall of General McClellan. Lincoln and McClellan never saw eye-to-eye about war strategy. It didn't help that McClellan was known to have referred to the president as a 'baboon'. But banning his favourite protest singers didn't help the working relationship, either. In 1864, when Lincoln was running for re-election, his opponent was George McClellan. McClellan had a plan for a negotiated peace with the Confederacy that was popular with many voters. Fortunately for Lincoln and the Union, Sherman's March to the Sea was successful, and Lincoln was re-elected and the Confederacy defeated.

Flushed with their success at defeating slavery, the Hutchinsons turned their attentions to women's rights and temperance. They also raised singing families of their own. By 1872, the family reported that the 'Tribe of Jesse' boasted 107 grand- and great-grandchildren of the original couple.

They weren't Phil Ochs or Bob Dylan, but the Hutchinsons played their part in making US musical and political history.

1'Zephy', short for Zephaniah.2Three Hutchinsons died in childhood.3'Old Dan Tucker', as originally sung, was a minstrel song in 'dialect'. As sung today, it isn't. It's a hillbilly nonsense song.4Aide-de-camp.