Fate, Faith, and Phrenology: Fanny Crosby Meets George Combe Content from the guide to life, the universe and everything 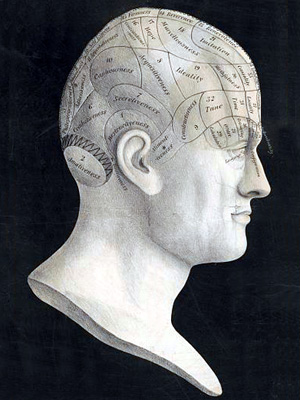 There are no 'bad guys' in this story: just people who meant well, but had different ideas. Some believed in Science. Others, in Good Works. And one, a young woman who believed in what she couldn't see – a good thing, since she was blind – may also have believed that there is a special providence in the fall of a sparrow1, because she owed her prodigious poetic output, among other things, to the 'science' of phrenology.

People in the past were unfortunate in that they lacked our comprehensive knowledge of Science. In the 21st Century, let's face it, the public considers basic questions of life, the universe, and everything to have been solved. They believe we know where we come from, and where we're going, and have moved on to such burning issues as, 'Should the cloning of cats be allowed?' Whereas in the 19th Century, people knew they didn't know things. They considered such questions as 'What is consciousness?' to be legitimate opportunities for research. And they were willing to countenance truly odd ideas – such as the concept that bumps on your head might reveal what you're good at in the brain department, or that there was such a thing as Christian phrenology.

So now we're going to explain about Fanny Crosby and George Combe.

In the 1830s, Fanny Crosby was a teenaged student at the New York Institute for the Blind. Fanny had a prodigious memory: she had already memorised most, if not all, of the Bible. The director of the school – one of the first of its kind in the US – was keen to have Fanny become a teacher. However, she wasn't going to qualify unless she could master arithmetic, which was proving a problem. Dr Jones, the director, felt that he knew what the problem was: Fanny spent too much time composing poetry. This was frivolous, and probably a sin, and should stop now. So he told Fanny to quit making verses.

This created a serious hardship for the talented young woman. On the one hand, Fanny tended to do what she was told. On the other, she'd been making verses since she was eight. To comfort her for having such a handicap – being blind from infancy – Fanny's mother had read her John Milton's sonnet 'On His Blindness'. To which eight-year-old Fanny wrote:

What a happy soul am I!
Although I cannot see,
I am resolved that in this world
Contented I will be.
How many blessings I enjoy,
That other people don't.
To weep and sigh because I'm blind,
I cannot, and I won't2.

Allowing for the difference in age, experience and education between an eight-year-old blind girl in 1820s New York City and a 40-something Puritan government executive, Fanny's work seems perhaps only slightly inferior to Milton's. From then on, Fanny made verses. And she was really gifted. Eventually, her verses were published in newspapers, and she even recited some in front of Congress. But that's getting ahead of our story. First, Dr Jones had to be convinced that poetry was a suitable pursuit for a blind teenager.

Dr Jones was a pious and well-intentioned individual who seemed to be thwarting Fanny's genius. Dr Jones, however, was to change his tune once a real expert came along: George Combe of Scotland.

George Combe was an Edinburgh attorney, well-off, and a leading proponent of the new science of phrenology: telling things about people's brains from the bumps on their heads. According to Combe, this was a very Christian thing to do, because self-improvement was a Christian duty. Diagnosing talent was a specialty of his.

Combe was no charlatan in the eyes of the respectable (and educated) community. Boston, the American centre of phrenological study since 1832 when the renowned German phrenologist Johann Gaspar Spurzheim (b. 1776) expired in their city, was fully behind George Combe. When Combe toured the US in 1838, he came to visit the New York Institute for the Blind. And that's where it happened.

A number of students were brought to Combe for study. First, he astonished the faculty by explaining that one boy whose head he inspected was a born mathematician. Why, he was certain to be gifted in that direction because of his phrenological configuration. The faculty members were suitably impressed, because the boy in question was, in fact, their best maths student. Then Combe felt Fanny Crosby's head...

And pronounced: 'And here is a poetess; give her every possible encouragement... You will hear from this young lady some day3.'

That did it. Science had spoken. There was no more talk of 'avoiding poetry'. In a complete 180-degree turn, Dr Jones even hired a poetry tutor for Fanny, to teach her prosody and the like. She studied the works of William Cullen Bryant, then a famous poet. Hardly anyone remembers Bryant's poetry today, but millions have sung Crosby's hymns, of which she wrote at least 8,000. You may have sung her 'Blessed Assurance', or be familiar with rousing anthems such as 'To the Work'. Her output was prodigious and her social effect far-reaching, thanks to the encouragement of teachers, publishers – like PT Barnum, who published her first poem – composers, and, of course, that phrenologist.

There are several ways we can approach this set of events. The fact that Combe was right about two students' gifts could be an astounding coincidence. But assuming the premise that Fanny Crosby would have ascribed to – namely, that she wrote what she wrote because Heaven had something to say – what role might Divine Intervention have played in the history of her hymn writing? Did Providence unleash the phrenologist upon Dr Jones, and inspire him to connect head shapes with mathematical and poetic ability?

Well, it could have been that way – and you might accept that interpretation if you are a believing Christian, or possibly a Jungian with faith in universal synchronicity, or a student of Shakespeare... or you might conclude that bumps on the head really do indicate writing talent.

Oh, and Fanny did learn enough arithmetic to qualify as a teacher. She worked at the Institute for a time, and was good friends with a colleague on the faculty, a young accountant named Grover. Grover, whose last name was Cleveland, later became president of the US. It's a small world, and full of minor examples of synchronicity.