Getting Lincoln Inaugurated: A Tale of Travel, Intrigue, and Danger Content from the guide to life, the universe and everything 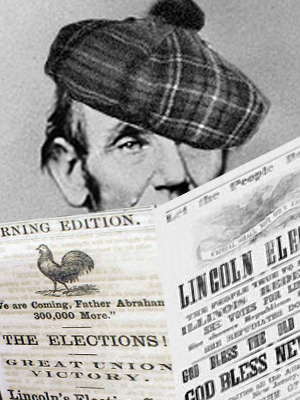 Every four years since that revolutionary year of 1789, there has been a presidential inauguration in the United States. Every four years since 1801, the inaugural celebrations have taken place in Washington, D.C. George Washington was inaugurated in New York City on 30 April, 1789. After that, inaugurations were held on 4 March, until 1933, when the 20th Amendment to the US Constitution reset the date to 20 January. The reason? There's a lot of mischief that can happen between an election and an inauguration. It's better not to let the opposition get a jump on you. Giving them two more months to plan pickets and roadblocks would just be asking for it.

Take the case of Abraham Lincoln. Voters were so angry when he was elected that between election day and the 4 March inauguration, seven states had seceded from the Union. Tempers were high. Lincoln might not even have made it to his inauguration alive without the help of the Glaswegian detective Allan Pinkerton, who was working for the railroads. Pinkerton had a package to deliver: one president-elect, intact. How he managed it, and how the event went off, is pretty interesting.

Lincoln on a Whistle Stop

For 12 days in February 1861, Abraham Lincoln was travelling by rail between his home in Springfield, Illinois, to Washington, D.C. It did not usually take 12 days to cover that distance, even in 1861. What Lincoln was doing was what many presidents-elect have done since: going on a goodwill tour to thank his supporters. Understandably, Lincoln's tour took him across the northern part of the US. The South hadn't voted for him   – and, as we shall see, they were actually about to stage their own alt-inauguration down in Montgomery, Alabama. The seceding states had organised themselves into the Confederate States of America, and were busy getting ready to swear in their own president. But let's leave them to it, and follow Lincoln's itinerary.

The special inaugural train consisted of a baggage car, a passenger car, and a smoking car. There was a 'refreshment saloon' and a 'private saloon' for the president-elect1.

Allan Pinkerton was born in the Gorbals district of Glasgow, and he was a tough customer. Here's how Pinkerton got Lincoln safely to Washington:

Lincoln arrived safely in Washington, due to, or possibly in spite of, all this skullduggery. Pinkerton wired his staff, 'Plums [Pinkerton] arrived with Nuts [Lincoln] this morning.'

Lincoln checked into his hotel room and was greeted by extremely nasty hate mail. He sighed.

While folded uncomfortably in a railway sleeper berth that wasn't meant to hold greatness, Abraham Lincoln was serenaded by a drunk. The drunk didn't know this: he was just standing on the railway platform, singing 'Dixie' at the top of his lungs. Lincoln muttered, 'No doubt there will be a great time in Dixie by and by.'

On Inauguration Day, 16-year-old Julia Taft was watching the parade. She heard a woman say, 'There goes that Illinois ape, the cursed Abolitionist. But he will never come back alive.'

In front of the Capitol, Lincoln put on his spectacles and read his first inaugural address to an audience of thousands4. It wasn't a rabble-rousing speech. Lincoln made it clear that the new administration would follow the Constitution, which meant the South could keep their slaves until the law said otherwise. Lincoln said, however, 'It follows from these views that no State upon its own mere motion can lawfully get out of the Union... ' Ah, there was the rub.

After the speech, Lincoln took the oath of office from the Chief Justice of the Supreme Court, as is customary. The Chief Justice at that time was 83-year-old Roger Taney, the author of the Dred Scott Decision, a precedent that supported slavery and led to the Fugitive Slave Act. Taney knew what Lincoln thought, and Lincoln knew what Taney thought. Three years later, Taney died. Lincoln replaced him with an abolitionist, Salmon P Chase.

Then it was all over except for the ball gowns. Pinkerton, Horace Greeley, and Lincoln's other friends breathed a sigh of relief. Getting a president inaugurated can be fraught.

1See Lincoln's private secretary's scrapbook of the trip, provided by the New York Times.2The Underground Railroad was the unofficial term for an escape network that helped people escape slavery and reach freedom. Underground Railroad 'conductors', both black and white, risked their own freedom and often their lives to guide people to Canada. The safe houses were called 'stations', following the railway motif. 3High schoolers in Maryland are known to react to their official state song with a mixture of incredulity and risibility. We suggest singing along. The tune is 'O Tannenbaum'.4How many thousand? The National Park Service didn't count them, because the National Park Service wasn't invented yet. But there was a photo. Professor Keith Still, a crowd estimator from Manchester Metropolitan University, has studied the photo and estimated the crowd in the photo at 7,350. That's the best we can do. And no, it wasn't as large an audience as for presidents Obama or Trump.