King Cotton: Agriculture, Commerce, and Slavery Content from the guide to life, the universe and everything 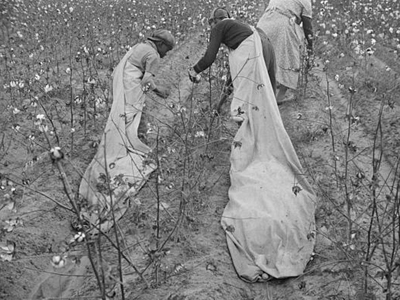 If you're human, unless you live in a very warm place, you need clothing. There are, essentially, three ways to obtain this.

For primitive cultures, option number one was attractive, though dangerous at times. Number two was off the table due to lack of chemical know-how. Number three was the easiest, which is why cotton cloth began to be made as long ago as the 5th Millennium BC. Evidence of cotton manufacture has been found in such disparate locales as the Indus Valley and Tehuacán, Mexico.

Cotton, a shrub of the genus Gossypium, produces a boll of almost pure cellulose around its seeds. If you harvest these bolls and separate the seeds from the fibres, you've got yourself the makings of some sturdy thread. You can weave it, dye it, sew it, and invent haute couture with it. You can grow it, sell it, buy it, and build economies on it.

You can also violate human rights with it, big-time.

This is the story of what cotton did to the world in the 19th Century.

In the Beginning Was Tobacco

The plantations of the southern coast of North America and the Caribbean islands of the 17th and 18th centuries were built on a dream: to make tons of money by exporting exciting new agricultural products to the developed countries of Western Europe. Early products were molasses1 (and the rum you could make from it), indigo, and rice. Virginia, which began as a limited-holding company in the days of King James I, was stumped at first: they were too far north for rice or sugar cane, and the swamp they were hiding from the Spanish in wouldn't take to indigo. When John Rolfe, the future husband of Pocahontas, turned up after a hurricane-sponsored layover in the Caribbean, he brought along the answer: tobacco. Tobacco fetched the big bucks in London, much to King James' dismay2. Soon, everybody and his kid brother were growing the noxious stuff. They even planted it in the streets of Jamestown3.

All this agriculture brought up a new problem: getting workers. The Powhatan Indians had more sense than to participate. They could grow all the tobacco they personally wanted, and were uninterested in packing barrels for shipment. Jamestown solved its severe manpower shortage by persuading, conning, shanghaiing, and judicially kidnapping Englishmen, Scotsmen, and Irishmen (and sometimes women) into indentured servitude. The 'bargain' was, manage to live through seven years of gruelling labour in an unfamiliar climate with demanding bosses, and we'll give you £50, a parcel of land, and the right to exploit some people of your own. The survivors of this entrepreneurial undertaking are now known as the First Families of Virginia. They supplied most of the first US presidents.

Virginia would take labour from wherever it could get it. In 1619, a Dutch ship got blown into harbour. It carried 20 kidnapped Africans, who were promptly sold to the labour-greedy Virginians. For some years, most if not all of the Africans and black Caribbeans who ended up working in Virginia were indentured servants – they got the same (raw) deal as the unhappy English, Scots, and Irish victims of the system. They picked tobacco worms4 in the hot sun, side by side, and afterwards were freed, interchanging cultural and linguistic titbits, and sometimes intermarrying. This could last only so long before landowners got nervous.

Landowners feared the united power of indentured servants. The solution was to divide and conquer. Law-making records in 17th-Century Virginia show how it was done: year after year, laws were passed that differentiated between groups of people. At first, Africans were discriminated against because they were not Christian. When they all joined the church, the argument shifted to the idea of 'race'. Laws were passed to define race: children inherited the status of the mother, for example. Other laws prohibited black Virginians from owning certain kinds of property, such as pigs. As time went on, while white immigrants were granted freedom after indentured servitude, blacks were condemned to servitude for life. Step by step, Virginia legislators institutionalised chattel slavery, a form of servitude in which one human being could be regarded as the disposable property of another.

As the tobacco boom subsided and the coastal lands played out, rendered less fertile by a couple of centuries of bad management, many people in the fledgling United States hoped that chattel slavery as an institution would die out. After all, the best way to end the 'institution' would be for it to become unprofitable. With tobacco prices falling, it was getting to be more trouble than it was worth to enslave people.

Then some fool had to come along and invent the cotton gin5.

Eli Whitney (1765 - 1825) was a Massachusetts-born inventor. At the age of 14, he ran a nail manufacturing operation during the Revolutionary War. After working his way through Yale (Phi Beta Kappa, no less), he ended up teaching in far-off Georgia. There he tackled the cotton issue.

What made cotton unprofitable in the early US was the problem of getting the seeds out of the cotton boll. This took forever. According to a story Whitney told, he pondered the problem while enjoying the view of the plantation landscape. He looked up to see a cat that had caught hold of a chicken through the hole in a fence. The cat tried to pull the squawking chicken through, but all it succeeded in getting were the feathers. Aha, Whitney thought, that's how we'll do it6. The mechanical cotton gin used teeth to separate the fibres from the seeds and pull the fibres through a mesh.

Before the cotton gin, US planters grew mostly short staple cotton – easier to separate, but less desirable from a thread point of view. With the invention of the cotton gin, it was more profitable to grow long staple cotton, which made a stronger thread and sold better on the world market. In addition, this kind of cotton would grow well in the new lands west of the Appalachians. At least, these lands were new to the white settlers, though not to the Indian tribes they were about to displace.

The cotton gin made processing cotton more efficient. It enabled mass production. It made people in Charleston and Virginia rich. It encouraged the settlement of the Deep South – Georgia and Louisiana, along with the new states of Alabama and Mississippi. It also gave new life to the crime of chattel slavery. When the Western World, including Britain and the US, outlawed the Atlantic slave trade in the early 1800s, cotton growers organised an internal slave trade, separating families and forcing up to 3 million people to relocate from one cotton plantation to another at the whim of commercial traders. The destinies of husbands and wives, parents and small children were decided as casually as the handshake of a used-car deal.

Cotton growers became enormously wealthy. They created an elite culture, and wielded enormous influence in the US government. Why was this influence so great? Because by 1840, cotton accounted for more than half of all US exports. Cotton was paying for the country's growth.

Europeans were involved in the cotton industry, as well. By 1830, more than half of British export income was produced by cotton textiles. Without cotton, Nottingham and Manchester would be hunting for jobs.

Eventually, northern US manufacturers became impatient, both of the disproportionate political influence of slaveholding states over rock-bottom-minimum-wage-paying states, and of the economic competition with textile manufacturing from the British Empire. Their representatives tried to stem the growth of slavery as an institution in new states, thus discouraging the spread of cotton power. By and large, they failed. When the conflict between warring interests and public opinion – humans are occasionally moral, after all – became too great, the nation erupted in war.

Fortunately, Eli Whitney had helped there, as well. Inventor Whitney had championed the use of interchangeable machine parts, creating strong industries in the US Northeast. The Union was prepared to face the cotton growers with mass-produced weaponry, thanks to Mr Whitney.

While the North and South were shooting it out to decide the economic and human-rights issues involved, Europe rediscovered an old truth: cotton could be grown in places other than Alabama. Mexico, say. Or Egypt. Or India. The textile mill owners bowed out of the North American conflict and opened new markets. Manchester and Nottingham kept working for low wages, while mill owners got richer selling bright colours made with the new aniline dyes.

And people kept wearing clothes made from natural fibres, until Dupont got into the nylon business.

1Treacle.2King James I wrote a famous treatise about the evils of smoking, which had about as much effect as the US Surgeon General's packet warnings.3Tobacco was not the only dangerous substance that grew in the Jamestown neighbourhood. In 1676 some soldiers had a memorable run-in with jimsonweed, or Datura stramonium. They lived to tell the tale, but just barely. Fortunately, no one considered exporting 'Jamestown Weed'.4The vivid green tobacco hornworm, Manduca sexta, is a pest that must be removed laboriously by hand from the growing tobacco. It is the caterpillar of a type of moth.5The cotton gin has nothing to do with alcohol or juniper berries. 'Gin' is short for 'engine'.6This may be a myth. However, it is a myth that originated with Eli Whitney.