Facial Hair and the American Civil War Content from the guide to life, the universe and everything 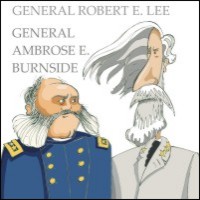 Today, tufty beards and long, frown-like moustaches seem ridiculous to citizens of many Western societies - including the USA. Indeed, in the modern USA people with unusual or distinctive facial hair (such as two members of the rock band ZZ Top1 or John Lennon in his later years) are marked out for derision, or else are extremely... memorable. If you walk down the street in a major city with a long beard and cheap clothes, there's a good chance someone will try to put a coin in your coffee cup.

In the USA, facial hair was quite unpopular until just about the time of the American Civil War, when pogonotrophy2 saw a rebirth in popularity. Photographs and portraits from the Civil War era, of generals and common soldiers alike, show a huge variety of facial hair. More often than not, a soldier in any given photograph from a march or battle has hair on his face.

The styles varied with each man. There was a simple moustache, a goatee, a moustache-soul patch combination, full beard-moustache, full beard with shaved lip, and a chin beard, to name some of the more common examples. It's understandable why a soldier would feel the need to grow facial hair, because in photographs the clean-shaven ones look comparatively young and undistinguished. But while it's tempting to believe that some soldiers grew a beard out of necessity (not having the time, tools or inclination to shave), it must be said that many of the facial hair designs must have required meticulous and regular upkeep.

Probably the most common form of facial hair for a soldier in the Civil War was a simple moustache, judging by its prevalence in photos from the era. Unlike today, the fashion wasn't to have a closely trimmed moustache, though. They were more full, angular, droopy and pointy on the ends than is fashionable today. It was exactly the sort of moustache you'd expect a film villain to twist between thumb and forefinger before tying a damsel to a railroad track.

Like many materials made of metal, razor blades were scarce during wartime. Not every soldier would necessarily have a blade of his own, and even civilians had trouble finding them for purchase. Yet the Union Army's official guidelines were quite particular:

1662.3 The hair to be short; the beard to be worn at the pleasure of the individual; but, when worn, to be kept short and neatly trimmed.

However, this rule wasn't necessarily enforced. You may be able to discern from the fact that more than 1,662 rules existed that not all of them could possibly be enforced (the Revised United States Army Regulations of 1861 amounted to more than 500 pages of rules). As we shall see, some of the very highest ranking individuals in the Union Army ignored this rule.

Of the generals in the Civil War, a few were notable for their facial hair, but none more so than Union general Ambrose Burnside - the man who led the North in the disastrous Battle of Fredericksburg. He had possibly the most ridiculous-looking facial hair in the entire war. Burnside allowed the hair along his cheeks and upper lip to grow, but shaved his chin. That along his cheeks appears to have thrived, and would have formed an impressive beard. But because of his shaven chin it appeared to curve in towards his nose (all of this enhanced by a receded hairline).

Most photos of him resemble a man who has stapled a pair of unwilling squirrels to his face. His last name became a term to describe the growth of hair on the side of the face, in front of the ears. The term 'burnsides' was somehow flipped so that today these patches of hair are commonly referred to as 'sideburns'4.

Abraham Lincoln has one of the most recognisable appearances of any American, and a key component was his beard. Some photos and depictions show his dark beard exclusively under his chin; others show an extension of the beard over the cheeks and up past his ears. However, for the vast majority of his life, Lincoln had no beard. It was the intervention of an 11-year-old girl which caused him to grow one. When Lincoln was running for president in 1860, a girl from New York named Grace Bedell wrote him this letter:

Dear Sir
My father has just home from the fair and brought home your picture and Mr. Hamlin's5. I am a little girl only 11 years old, but want you should be President of the United States very much so I hope you won't think me very bold to write to such a great man as you are. Have you any little girls about as large as I am if so give them my love and tell her to write to me if you cannot answer this letter. I have got 4 brother's and part of them will vote for you any way and if you let your whiskers grow I will try and get the rest of them to vote for you you would look a great deal better for your face is so thin. All the ladies like whiskers and they would tease their husband's to vote for you and then you would be President. My father is going to vote for you and if I was a man I would vote for you to but I will try to get every one to vote for you that I can I think that rail fence around your picture makes it look very pretty I have got a little baby sister she is nine weeks old and is just as cunning as can be. When you direct your letter direct to Grace Bedell Westfield Chatauque County New York

This girl was correct: Lincoln had a very thin, gaunt face which is especially prominent in photos of him in the early years of his life. Lincoln, who was very good at communicating with children, took the time to write back:

Your very agreeable letter of the 15th is received - I regret the necessity of saying I have no daughters - I have three sons - one seventeen, one nine, and one seven years of age - They, with their mother, constitute my whole family - As to the whiskers, having never worn any, do you not think people would call it a piece of silly affectation if I were to begin it now?

Despite his initial hesitation, Lincoln began to grow a beard. By the time he was elected president and set off for Washington, DC, he had a full one. The story goes that when his train stopped in the town in New York where Bedell was from, Lincoln called out for her and, when she came, kissed her several times and told her he'd taken her advice (she no doubt saw as well as felt it). Bedell changed the literal face of history. Lincoln did the same by selecting several cabinet members who had noteworthy facial hair as well.

Lincoln's first secretary of war was a man lacking facial hair named Simon Cameron. However, finding that this bare-lipped, bald-chinned man couldn't get the job done (no doubt because of these features), he called upon Edwin Stanton, who had a long, pointy, dark beard that over time gradually became grey from the centre outwards - like a silver firework on a dark night.

The attorney general in the Lincoln administration was a Missouri man named Edward Bates. By the time he became attorney general, his hair was grey and his beard white. His beard (sans moustache) extended along his cheeks over to his ears, hiding his neck entirely. When wearing a collared shirt and sitting down, he had the distinct appearance of being neck-less. When he left the admnistration, he was replaced by James Speed, who had more hair on his chin than his head, and was the only member of the Lincoln administration to sport a moustache.

Lincoln's secretary of the navy was called Gideon Welles. Lincoln nicknamed him 'Neptune', because of a navy man's necessary relationship with the sea. Nevertheless, Welles sported quite a beard and the Roman god Neptune is most often depicted with one. Welles' beard was a white tangle, resembling a large cotton ball or a puffy cumulus cloud.

The Lincoln administration was brought to an abrupt end in 1865 by John Wilkes Booth, who shot the president in Ford's Theater and then made his escape. Booth had the beginnings of a handlebar moustache at the time, but shaved it off to disguise himself. It didn't work - he was found and killed.

It's telling that the US president whose election ushered in the Civil War, Lincoln, was the first man with facial hair to hold that office. Furthermore, only one man without any facial hair was elected US president from the time of the Civil War right through to 1913 (William McKinley - and he should have known better, being a Civil War veteran). Neither of the two major parties has nominated a candidate with facial hair for the presidency since 1916, when the Republicans chose Charles Evans Hughes (Hughes was incidentally the last member of the Supreme Court to have had facial hair).

1The two famously long-bearded Billy Gibbons and Dusty Hill make the third member of the group (ironically named Frank Beard) look like a pre-pubescent teenage boy with his neatly trimmed goatee.2...defined as the practice of growing a beard, it's apparently a real word.3This number denotes the rule number in the Revised United States Army regulations of 1861.4Probably the most famous wearer of sideburns was Elvis Presley.5She was referring to Hannibal Hamlin, who was Lincoln's running mate and vice-presidential nominee.