A Presidential Inauguration? Content from the guide to life, the universe and everything 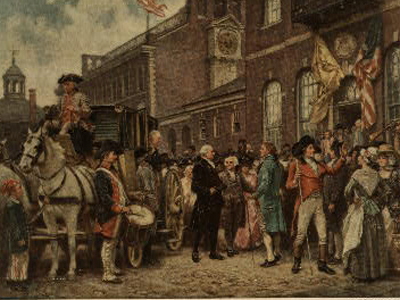 On 30 April, 1789 the first inaugural oath of office was taken on a balcony in New York City. Nobody was quite sure what to do: they fumbled, they fidgeted, and one eyewitness was even embarrassed for the President who, he felt, should be 'first in everything'. Somehow they got through it, following the instructions laid out in a Constitution whose ink was hardly dry. The new country was now organised, it was legal, and it had a leader: George Washington, the 'indispensable man'1.

Washington was indispensable because the one important thing the new republic needed was the orderly transfer of power. Without this, it had been feared by the Anti-Federalists that the new, experimental nation would degenerate into what is now referred to as a banana republic, ruled by a corrupt elite and marred by coups and revolutions. Somebody had to be President for four years, eight years or longer2, and then that somebody had to give it up, retire, write his memoirs and go fishing.

Washington was the man to do this because he had already proven he could. In 1783, having thoroughly trounced the Evil Empire of his day, Washington stood at the head of a victorious army. Some thought he might have become king. Instead, this modern-day Cincinnatus addressed his troops in a farewell speech and retired to Mount Vernon. He had gained power and then given it up – he could be trusted.

As with any exercise of power, trust is a major issue. So is 'getting it right': performing the ceremony with exactitude, imbuing the moment with gravitas. Washington was by all accounts extremely nervous, and so, apparently, were President-Elect Barack Obama and Chief Justice John Roberts when their turn in the spotlight came. On 20 January, 2009 a mistake was made by the Chief Justice, and the President-Elect3 followed suit - out of politeness, one may suppose.

The question is: did it actually matter? Did it affect the orderly transition of power?

The Gaffe Heard Round the World

On 20 January, 2009, an estimated one million people gathered on the Mall in Washington, DC to attend the inaugural ceremonies inducting Barack Obama as the 44th President of the United States4. Interest was particularly high as Obama, the first President of mixed European and African heritage, was expected to address a number of important questions in his Inaugural Address.

Before giving the much-anticipated address, Obama first had to take the oath of office, which was administered by Chief Justice Roberts. The oath (as prescribed in the US Constitution) reads as follows:

However, what Chief Justice Roberts and Senator Obama said was:

...I will execute the office of President of the United States faithfully...so help me God.

Whereupon the band struck up that grand old song in praise of Scotland, 'Hail to the Chief', and all present assumed that Mr Obama had become the 44th President of the United States.

An Ounce of Prevention

Obviously, there was a soupçon of doubt. Lest difficult questions be asked, Chief Justice Roberts administered the oath again the next day, before President Obama began his first day of business in the White House.

There is precedent for taking the oath twice: Chester A Arthur and Calvin Coolidge had both retaken the oath, Coolidge because there was some question about his father, a notary public, having administered the oath. The Obama case was unusual in that the oath was administered again in private after having been administered in public.

As the Constitution merely states that the President-elect must take the oath before he can 'enter on the Execution' of the office, and there were no official duties scheduled on Inauguration Day5, the point is moot. Regardless of whether the new President entered into office on 20 January or the following day when he began giving orders to the military, he became the President of the United States, 'signed, sealed, delivered'.

Contrary to what the unwary may have gleaned from blogs and email rumours, the following statements are not true:

After Celebration, a Beginning

So was the United States of America rudderless for a day, if the oath was incorrectly taken? No more so than usual. The President is the head of the Executive Branch of the government and the Commander-in-Chief of the Armed Forces, but he is neither king nor dictator. According to the Constitution, he takes office at noon6 on the day set for the inauguration. Inauguration Day is a day of holiday in Washington, DC, and little business is transacted. Once business began again on 21 January, it was clear that the 44th President of the United States was in office and in charge.

The word 'inauguration' contains the word 'augur', which can have the meaning 'to foretell, to forebode'. Some might find a mistake in the Presidential oath of office an inauspicious beginning to an unusual Presidency. Others might remember George Washington's nervousness in 1789, and move on to more concrete matters.

1Flexner, James Thomas. Washington: The Indispensable Man (1974).2Term limits came later (22nd Amendment).3No one is given the title of 'President' until after he has taken the oath.4Although Obama is the 44th President of the United States, he is only the 43rd individual to fill that office. Grover Cleveland served non-consecutive terms, no doubt with the intent to confuse historians.5Dancing doesn't count.6Local time, or EST. The Founders omitted this detail as there were no time zones in 1787.