Cincinnatus: Saviour of the Roman Republic Content from the guide to life, the universe and everything 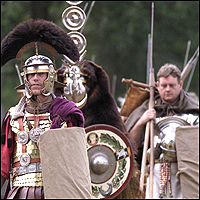 Rome was not always the mighty empire most people think of when ancient Rome is mentioned. In 519 BC, when Lucius Quinctius Cincinnatus was born, it was a small, growing city with a territory of 50 square miles. But it was already ruled as a republic, having overthrown its tyrannical king, Tarquin the Proud, just ten years previously.

Cincinnatus was a man of the Roman patrician class - the nobles. He was highly respected by the rulers and people of the city. Cinicinnatus was very wealthy, but became poor after an unfortunate incident involving his son, Caeso. Caeso had a violent temper and one day attacked and beat a former tribune1 named Marcus Volcius Fictor and his elderly brother, who died of his injuries. Caeso was jailed and then freed on an enormous bail of 30,000lb of bronze. This money was too much for Cincinnatus to pay alone, so he was helped by ten other men. But Caeso fled and the bail was lost.

Of course, this meant that, for honour's sake, Cincinnatus had to repay the men who had helped him. He did so by selling almost everything he owned. He, his wife, Racilla, and a number of slaves were left to work a small, four-acre plot of land outside the city.

When one of the city's two consuls2 was killed in an attack on Rome, Cincinnatus was elected as his replacement. He restored order in the city and, as the end of his term approached, the senate wanted to elect him for another term. This was illegal and Cincinnatus pointedly refused. His term complete, he returned to the farm.

This was not the only time he was called upon. When the Roman army was ambushed and looked to be destroyed, it was Cincinnatus they called on.

The army was away from the city when it was ambushed while on the march by local enemies, called the Aequi. Things looked grim for the soldiers until five captured horsemen were able to escape and return to the city to warn that, after the army was defeated, the city would be next. A second Roman force was also abroad and too far away to rescue the first. The only men left in the city who might form a relief force were too old or young to fight and a few stragglers3. In desperation, the city's leaders turned to Cincinnatus for help.

When they came to him, Cincinnatus left the farm and went to the city to take over. It was all part of Roman politics: during times of crisis, the senate could recommend the selection of a dictator. The term 'dictator' originates from the Latin word for 'to say', because anything they said during their time in office became law. The right man for the job was then chosen by the two consuls.

The dictator ruled under martial law and became superior to both the consuls and senate for the duration of his term - no more than six months. On this occasion, the consuls were each leading one of the armies, so Cincinnatus was elected directly by the senate. He was aware that his absence from the farm meant the harvest would be poor and his family would go hungry, but he considered his duty to be more important.

Cincinnatus ordered the suspension of all business and for all men of military age to gather, suitably provisioned. Everyone who was too old to fight was to assist in gathering food for the soldiers.

Having spoken words of encouragement to his rag-tag force, Cincinnatus led them to the rescue of the Roman army, which had been under attack for three days. Arriving at night, he sent his men to surround the Aequi, digging a ditch all the way around them and filling it with stakes to prevent an escape. He then ordered his men to yell a fearsome Roman war cry to encourage their brothers who were under attack, before attacking the enemy themselves.

The Aequi were taken by surprise and now had to fight two armies at once. As they turned their focus from the newcomers to the re-energised Roman army, Cincinnatus ordered his men to dig in for the night. The following morning, they charged. The Aequi surrendered almost immediately. Cincinnatus allowed the survivors to disband, but took the leaders to Rome.

On his return, Cincinnatus was not surprisingly treated as a hero. There were great celebrations, including a procession. It was custom for a dictator to return his powers once the crisis was over, but first Cincinnatus took the opportunity to try Volcius Fictor for perjury relating to his testimony in Caeso's trial. (Some soldiers had claimed that Caeso was away on military duty at the time of the attack.) As dictator, he found Volcius Fictor guilty and exiled him. Cincinnatus then returned his powers. The leaders of the city even offered to make him king but, to his enormous credit, he refused and returned to his poor farm, also refusing offers from the senate of land and the spoils of war.

The Final Call to Serve

Decades later, Cincinnatus was called upon once again. It was a time of famine, and a wealthy Roman named Spurius Maelius was providing corn extremely cheaply, or for free, to the poor. This made him extremely popular with the lower classes but raised the suspicions of the nobles, who suspected he might have kingly ambitions, an anathema to Romans.

He was thought to be keeping weapons in his home, so it was decided to call Cincinnatus in as dictator again. He was over 80 at the time, but accepted the call after initial hesitation. Cincinnatus went in secret and ordered Maelius to be called before a tribunal. Afraid, Maelius refused, and in the melee which resulted was killed.

Although no-one could be certain Maelius had aimed to become king, he was posthumously declared guilty of refusing the summons of the dictator, which was a capital offence. Several plebians (common citizens), believing Maelius to have been killed by powerful interests, attempted to revolt, but failed. Cincinnatus had them executed.

The death of the saviour of the republic could not have been too long after this. Unfortunately, nothing is known about it.

Shortly after the American War of Independence, comparisons began to be made between Cincinnatus and George Washington, the general who led America's forces to victory and later served as president. It is not surprising the leaders of the American Revolution looked to Rome as a model of how to form and run a republic, and the similarities between Washington and Cincinnatus are striking. Both were farmers who were called on by their nation's leaders to serve. When their tasks were complete, both returned to their farms.

1An important administrative position.2Elected leaders who took care of day-to-day governance.3The army consisted of citizen-soldiers; all the men of fighting age. They were semi-professionals who only fought when needed.4A group of officers who fought in the War of Independence.