Little Sorrel, Another Horse Hero, and What Became of Him Content from the guide to life, the universe and everything 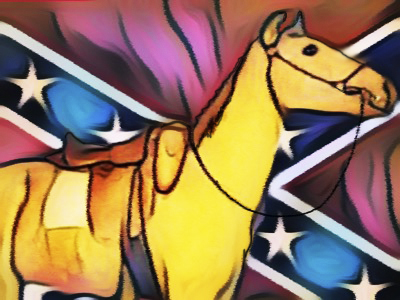 It is safe to say that horses played as large a role in human life in the 19th Century as automobiles did in the 20th. Unlike cars1, horses are live beings with personalities and feelings. Some horses became famous in their day: not only racehorses, but also impressive war steeds. Napoleon had several. As late as 1918, there was Warrior.

The US Civil War cost the lives of one and half million brave horses2. Some of them, like Robert E Lee's Traveller, became iconic3. We're going to add to the list of great war horses here, and tell you the story of Little Sorrel, Stonewall Jackson's horse. It's a long story, covering almost a century and a half. If that seems a long time for a horse, you're right. Read on, and you'll understand.

The Morgan foal (a Morgan is a kind of horse, not a name4) was born on Noah C Collins' farm on Pink Street in Somers, Connecticut, somewhere around 1850.

Connecticut is in the North, so Little Sorrel was originally a Yankee. Even though Little Sorrel became famous as a Confederate horse, the townspeople of Somers named a street after him in 1990. This was very broad-minded of them.

In 1861, Confederate troops captured a Union transport train near Harper's Ferry, Virginia. The train contained cows and horses, which now became Confederate cows and horses5. General Thomas 'Stonewall' Jackson happened to need a couple of horses, and promised to reimburse the army for his new mounts. He picked a large chestnut, or 'sorrel' horse for himself, which he named Big Sorrel. The smaller sorrel horse he named Fancy, and planned to send it to his wife.

But Big Sorrel was not very fond of loud noises. Being nervous at loud noises is not a good trait for a war horse to have. Also, his gait was uneven. Back then, generals didn't ride horses for fun. They rode to get somewhere. A long ride on a horse with an uneven gait was about like driving for hours on the Interstate while sitting on a loose seat spring.

Fancy, on the other hand, was imperturbable. He didn't mind cannon fire – in fact, it made him pay attention. And riding on his back was so smooth that General Jackson could fall asleep in the saddle on the way back to camp. So Fancy stayed. But that name had to go. 'The general charged ahead on Fancy,' didn't really have that martial ring. So Fancy became Little Sorrel, the famous Confederate horse.

Little Sorrel was fine with all of that.

To Chancellorsville and Beyond

Little Sorrel was an intelligent horse, known for his ability to intuit his rider's moods. He knew General Jackson wasn't too fond of notoriety. When the troops started cheering as the general rode by, Little Sorrel galloped away, as if to say, 'Hey, we have an urgent appointment with Robert E Lee. As you were!'

Little Sorrel carried Stonewall Jackson through some tough fighting. He featured in some famous battles, such as Sharpsburg and Fredericksburg. Alas, he was also there when the general met his untimely end through friendly fire at the Battle of Chancellorsville. Thomas Jackson may have sat his horse 'like a stone wall' (which is how he got his nickname), but Little Sorrel bolted when the general was hit. The horse probably knew that wasn't supposed to happen. The horse's quick reflexes weren't enough to save his rider: Jackson died, and the veteran horse was sent home to the Jackson farm.

After the war, Mrs Jackson couldn't afford all the horses. So Virginia Military Institute (VMI) took Little Sorrel in. This isn't as odd as it sounds. Thomas Jackson was a professor at VMI for years before the Civil War. He taught Natural Philosophy (we would call it physics) and Artillery Tactics. Little Sorrel grazed happily there for a few years, always pricking up his ears when the cadets fired cannon, as if he wanted to go back to war with Jackson. He was also infamous for springing other horses from their stalls, so that all could find better grazing. After his stay at VMI, Little Sorrel went to live at the Confederate Soldiers' Home in Richmond. There he was beloved of the old veterans, and died at the ripe old age of 36 in 1886. His friends missed him.

Which is not the end of the story, by a long chalk.

The Afterlife of a Famous Horse

Little Sorrel's friends considered him a significant relic of the Civil War. So as he was dying, they sent for an expert: Frederick Webster, the famous taxidermist from Carnegie Museum6, came down from Pittsburgh to mount Little Sorrel's remains. Webster did an outstanding job of stretching the hide over a lifelike plaster of Paris body. In this form, Little Sorrel continues to be an attraction at the VMI Museum.

Webster was given the horse's bones to keep. He took them back to Carnegie Museum, where they joined the other skeletal wonders of that magic educational space. However, letting a Confederate horse rest in the hands of the Enemy didn't sit well with the good citizens of Virginia. In 1949, the bones were returned to VMI. The skeleton went on display for some time, but was later relegated to storage.

In 1997, some patriotic (Confederate) ladies decided that leaving the horse's remains in a storage box was disrespectful. On 20 July of that year, the Virginia Division of the United Daughters of the Confederacy (UDC, yes, this exists) dressed up in their best hoop skirts and solemnly buried Little Sorrel's ashes7 on the parade ground of VMI. While some onlookers doubtless came to mock, others took the ceremony quite seriously, including the re-enactors and their re-enactor war horses.

Pictures of the monuments can be found at Little Sorrel's 'Findagrave' page. You can also leave flowers and a note, as is usual for these memorial pages.

A discussion of the significance of the Little Sorrel commemoration is included in Drew Gilpin Faust, 'Equine Relics of the Civil War', In Southern Cultures: The Fifteenth Anniversary Reader, edited by Harry L Watson, Larry J Griffin, University of North Carolina Press, 2008.

For a city that served as an alt-capital for only a few years, Richmond, Virginia abounds in enough commemorative statuary to be the envy of a site with a much longer history – say, Athens. For a quick look at the debate surrounding Monument Avenue, we recommend this enlightening article from Richmondmag. It might be of interest that the equestrian Jackson statue on Monument Avenue has aroused outrage of another sort. The general is depicted astride Superior, a fancier horse that he owned, but probably never rode into battle, rather than Little Sorrel. The sculptor, F William Sievers, was classically trained and preferred the general ride a classier horse on a 17-foot statue. Thus is history falsified for aesthetic reasons. Fans of Little Sorrel should go to Charlottesville, Virginia, where a much more accurate statue, with Morgan appears to ride dynamically in Jackson Park8.

1No matter what your car-loving friends may say.2The war horses have their own monument in monument-rich Richmond, Virginia. The former Confederate capital offers this incredibly touching statue as a tribute to them, and a warning to us.3Ulysses S Grant had numerous horses during the war. The Union general was a remarkably accomplished rider and a superb judge of horseflesh. His equestrian companions included a roan named Fox, a fine thoroughbred named Cincinnati, and, of course, the pony he named Jeff Davis. Jefferson Davis was the president of the Confederacy, and the pony was stolen from his brother's farm in Mississippi.4Well, okay. Morgans are all descended from a stallion named Figure, who was born in 1789 in Springfield, Massachusetts. Figure ended up in the possession of a man named Justin Morgan, who unfairly gave his name to the breed. They should be called Figure Horses, but they aren't. Figure weighed about 1,000 pounds and stood 14 hands high. Morgans are desirable horses because they are sturdy, known for their endurance, and have the ability to survive on a poor diet – a good trait for a war horse.5Union and Confederate troops stole supplies, guns, and animals from each other all the time.6Carnegie Museum in Pittsburgh is famous for its dinosaurs, statuary, and other wonders, such as the diorama with real human remains.7The ashes of the bones, that is, plus one stray tooth that missed the crematory fire.8Experts at the 1921 unveiling of this statue commented that the representation of the horse was accurate, but its gait was not. The horse is trotting, and Little Sorrel was a pacer. If you aren't a horse expert, you'll probably enjoy the statue more.