How to Show Your Weekend Guests a Good Time in Pittsburgh Content from the guide to life, the universe and everything 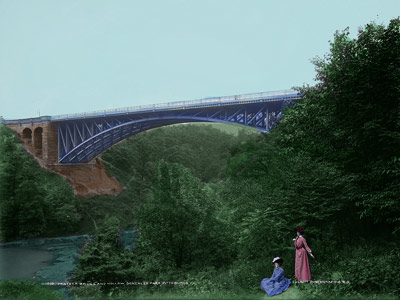 Pittsburgh, in the US Commonwealth of Pennsylvania, is a fascinating place in which to entertain visitors. The multi-cultural metropolis at the confluence of the Monongahela and Allegheny rivers (they join to form the Ohio at the Point, where downtown Pittsburgh is located) offers a wealth of attractions for the casual tourist. Thanks to the switch from coal to natural gas in the late 1950s, the air is now breathable, and once your company have got over the language difference, they're free to spend a weekend discovering the Steel City's manifold delights. They may not go treasure hunting, or try to dredge the Monongahela for the World War II Mitchell bomber buried in the silt, but there is plenty to see and do.

If your visitors arrive on Friday afternoon, treat them to the view from Mount Washington (pronounced 'Warshington' locally). To reach the top of the 367-foot hill, take one of the two funiculars, or cog railways, built in the 1870s. There is an observation deck up there, and there are restaurants. Let your friends gaze their fill at the Point, watch the sun set, and then enjoy a good meal while the lights come on below. Go back down the same way you came up. We hope you didn't park in a towaway zone1.

If your guests are night owls, there are clubs and cinemas to visit. Once a dangerous strip-club area, Liberty Avenue has been gentrified, and might attract fans of the US television series Queer as Folk2 – although those fans should be aware that the 'Liberty Ave' scenes in that programme were mostly filmed in Toronto, which has a lot more gay bars.

Saturday: Head for the Country

Western Pennsylvania was settled by Scots, Irish and Germans, who, along with the local Lenape, created the original ambience. While this end of the Ohio Valley may not strike you as paradise, in the 19th Century, utopianists were drawn to the area. One such settlement, now called Old Economy, is open for tourists. Founded by a group of German Pietists known as the Harmonists, the peaceful settlement included 3,000 acres of productive farmland. Villagers made wine and beer, and practised crafts while avoiding sex and waiting for the Second Coming. As this event was delayed longer than they thought, the colony died out. (See the bit about avoiding sex.) In the early 20th Century, the land was bought by US Steel's American Bridge Division, which is why the town is now called Ambridge. (American Bridge, get it?)

To get to Old Economy from Pittsburgh, take Route 65 north for 16 miles. You will pass the upscale suburb of Sewickley. (Keep going, nothing to see there unless you have a child in prep school.) At Ambridge, take the Merchant Street exit and follow the signs. It is best to check the website for opening times, prices, and tour arrangements.

A two-hour tour and lunch in Ambridge, and you can drive back to Pittsburgh to attend a game by the Steelers (American football), the Pitt (University of Pittsburgh) Panthers (also American football), or the Pirates (baseball) in season. For those too tired to move after all that walking, the games can be watched on television from the comfort of your home or hotel room. Be sure to lay in local snacks, such as chips and pretzels from Hannover and Berlin (Pennsylvania), and some Iron City beer.

Sunday: Worship at a Cathedral

The term 'worship' here is used relatively. In Pittsburgh, it is possible to view a cathedral without the inconvenience of religious observance. The cathedral in question is, of course, the Cathedral of Learning, located on the campus of the University of Pittsburgh, in the Oakland district, a $2 bus trip straight up Forbes Avenue from downtown.

After gawking at the sight of 42 storeys of Gothic Revival architecture, it is necessary to take a tour of the Nationality Rooms. Pittsburghers from 27 different countries have banded together to design these wondrous classrooms. There is even a brick from No 10, Downing Street set into the wall of the English classroom3. Take the virtual tour online, and you will be prepared to annoy the Quo Vadis guide with your superior knowledge and pointed questions – such as what happened to the books the Bund placed in the German classroom. (They were Nazi. They were quietly removed.)

Wear your walking shoes to Oakland. You and your visitors will want to stroll around, admiring the variety of architectural styles within a few blocks of the Cathedral. Behind the Cathedral is a another Gothic structure. You might see a wedding party coming out of Heinz Chapel4, a gem of a Gothic chapel with rather more secular windows than you're used to – in addition to religious figures, you will find allegorical figures, Beethoven, and even the search for the Holy Grail. There's Soldiers' and Sailors' Memorial Hall, a magnificent temple to civil religion built by the Grand Army of the Republic5. It features a museum and public rooms that can be rented. A historical note: Southern Baptists began their foray into Pittsburgh by holding meetings there in the 1960s. They were required by the rules to salute the US flag before each service began – under a portrait of General William Tecumseh Sherman. The displaced Southerners found this amusing.

Another must-see edifice is Frick Fine Arts, a Renaissance-style art museum belonging to the University of Pittsburgh. It houses a superior collection of reproductions of great art works. Helen Clay Frick, the rich patron who lent her name to the building, was a dedicated collector of art works, many of them forgeries. (Dedication does not always equal expertise.)

If you are already at the art museum, time permitting, you and your visitors may care to take a walk through neighbouring Phipps Conservatory, a botanical garden. From there, it is a short walk to Schenley Park, with its famous Panther Hollow. It is likely that the only Panthers you will see these days belong to the university's football team, but the area once harboured mountain lions6.

From your tour of the park, a walk back to Forbes Ave will take you past the intriguing Carnegie Library, one of many built by the great Scots American philanthropist and strikebreaker. Marvel, but hurry on past Forbes Ave (which is one-way) to Fifth Ave, where a bus will soon come along to take you back downtown.

If you've planned it right, your guests are now footsore but happy, and just have time for a bite at one of the many fine downtown restaurants before catching the limo back to the airport. You have pleased your visitors – you have delighted, informed, and fed them. Best of all, you are now rid of them, and can go home to North Hills and get a good night's sleep before you face the horrors of the Monday commute you didn't tell them about.

1You can park at the Monongahela Parking Wharf, unless the river is up or it is closed for construction. Pay attention to flood advisories, as cars have been known to float away in high water. Work continues in turning the Wharf Landing into a park and trail.2The US/Canadian co-production of Queer as Folk was based on a British television series of the same name. The story about the lives of five gay men was set in Pittsburgh, but filmed primarily in the Toronto area.3The room is called the English classroom, not 'the British classroom' or the 'UK classroom'. Complaints should be directed to the Chancellor of the University of Pittsburgh, 107 Cathedral of Learning, Pittsburgh, PA 15260.4Yes, Heinz Chapel is named for the ketchup people. It's Pittsburgh.5The Grand Army of the Republic, or GAR, was begun after the US Civil War as a fraternal organisation for Union veterans.6Students at the 225-year-old university feel safer now, and feel sorry for their frontier predecessors in 1787.