The Cathedral of Learning, University of Pittsburgh, Pennsylvania, USA Content from the guide to life, the universe and everything 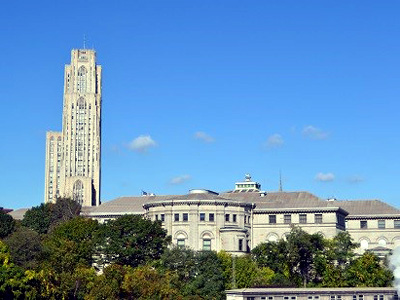 Described by some as a wonder of Gothic Revival architecture, by others as a 'pseudo-Gothic monstrosity', the University of Pittsburgh's 42-storey Cathedral of Learning is the tallest educational building in the western hemisphere; the world's tallest belongs to Moscow State University.

The University of Pittsburgh, itself one of the oldest universities in the United States (founded in 1787), grew out of a log cabin built at the confluence of the Allegheny and Monongahela rivers.

In the 1920s, then-Chancellor JG Bowman commissioned the architect Charles Klauder to design a grandiose new building to replace the temporary structures in which so much of the university was housed. The building, to be erected on a 14-acre site in the Oakland section of the city, was to be, in Bowman's words, 'a symbol of the life that Pittsburgh through the years had wanted to live'.

Why the architect, a Philadelphian, believed that Pittsburghers had always wanted to live in a Gothic skyscraper has never been adequately explained.

Construction of the building began in the late 1920s, but was delayed by the Depression. Schoolchildren in Pittsburgh helped raise funds for the Cathedral's completion by each donating one dime (ten cents) to 'buy a brick' towards the cost. A total of 97,000 thank-you certificates were issued.

Bowman's other major obstacle was the opposition of city leaders who felt that the structure was too tall. In retaliation, Bowman vowed to construct the skyscraper from the top down; quite feasible, due to its structural steel frame. First the steel frame was erected, then the floors were added, with Indiana limestone cladding around the frame.

Among the striking features of the Cathedral is the three-storey Commons Room, built in true Gothic style, with true Gothic arches. No steel was used: each arch is made of Indiana limestone.

The Cathedral of Learning was dedicated in 1937, but features continue to be added. The most striking feature is the series of 26 Nationality Rooms on the first and third floors, each representing the history and accomplishments of the nationality group that constructed it. Visitors' tours are conducted by student volunteers from the organisation Quo Vadis.

The largest of the Nationality Rooms is the English classroom, which incorporates a brick from Number 10 Downing Street. The smallest is the Irish classroom, a model monastic oratory. New rooms continue to be added, as money and ethnic pride permit.

In the Commons Room, the massive wrought-iron gates created by the blacksmith-artist Samuel Yellin still greet visitor and student alike, as they have for over half a century now, with the words of the poet Robert Bridges:

Here is eternal spring. For you the very stars of heaven are new.