How Hoopy Were Hoop Skirts? A Fashion Moment Content from the guide to life, the universe and everything 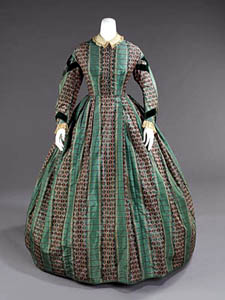 What does it mean to be modern? What does a 'progressive' idea look like? It actually depends on where you're standing in the space-time continuum. And if you happen to standing inside a hoop skirt, you might find yourself with a surprising vantage point.

What the Heck Is a Hoop Skirt?

A hoop skirt – a female fashion item from the 1850s and 1860s – is a kind of crinoline, an undergarment to support a large skirt. Not all crinolines are hoop skirts. The crinoline started life, in Western Civilisation at least, back in the 1500s. Crinolines came back into fashion during the early Victorian era. The bulky skirts added a pleasing profile to women's fashions. At least, the profile was pleasing to women in the 1850s. Stepping into a sort of cage worn from the waist down allowed women to adorn themselves in yards and yards of skirt in highly decorative styles. (Think wedding cakes with icing festoons, and add some tassels.)

The heavy horsehair material weighed women down. It was like wearing a Victorian sofa. Enter the hoop skirt: an invention that arguably liberated women by giving them more freedom of movement. The hoop skirt, which was made of springed steel1, was light. Women could move around under that frame. Surprisingly easy to manipulate, the hoop skirt made women mobile again.

Hoop skirts did more than that. They gave women a new fashion weapon in the war between the sexes. At up to six feet in circumference, a hoop skirt was a highly decorative territorial claim. A handful of women could squeeze all the men out of even a spacious assembly room. The skirts kept the 'opposite sex' at a safe distance, too. There would be no groping, grabbing, or stolen kisses  – at least, not without some serious strategising on the part of the males.

'Ah', you say, 'but those hoop skirts are ridiculous. Sure, they're in all the fashion magazines of the time. But did anybody really wear them?'

Let's see what the factory owners have to say. 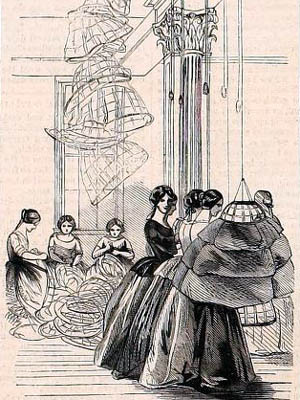 According to Harper's, which was a news source of record for the time, the factory turned out 3,000 hoop skirts a day. For this, it needed a ton of steel every day. The article also says that the New York garment business together manufactured about 10,000 skirts a day. That was a lot of skirts, and it points to widespread use. Those crinolines must have been blocking doorways and cluttering streetcars from Boston to Savannah, and from Washington, DC, to Cincinnati and beyond.

A lot of material went into hoop skirts. Douglas & Sherwood consumed per month:

It is safe to say that hoop skirts were big business in 1859.

Harper's noted approvingly that the Hoop Skirt Factory's owners were concerned with the 'mental welfare' of their employees. Douglas & Sherwood provided a 2,000-volume library for the women's free-time reading.

How Dangerous Were Hoop Skirts?

Very. Or not very, depending on the 'expert historian' who's holding forth. Certainly the danger of death by fire was not non-existent. Poet Henry Wadsworth Longfellow's wife Frances died as the result of a clothing fire. In London in 1858, there were 19 crinoline-related fire deaths in a two-month period. On the other hand, fabrics of that day were rather slow-burning. Contemporary fashion publications like Godey's Lady's Book did advise caution around fires.

It is possible that wearing that much clothing in a home with open flames was not very wise. On the other hand, the hoop skirt was a party fashion, not one that women wore to do the laundry or cook dinner. The main problem seems to have been that they hadn't developed the modern response of 'drop and roll' when confronted with a clothing fire.

Other dangers of hoop skirts involved getting them caught in things, or having parts of the skirt frame break loose and stick out awkwardly, like broken umbrella staves. Obviously, the hoop skirt required attention. Walking in them was an art. A successful practitioner appeared to glide over the floor or up and down stairs, presenting a highly entertaining picture for the onlooker, who was invited to look – but not touch. Hoop skirts made for elegant dancing.

The Confederacy and the Hoop Skirt

The hoop skirt went out of fashion during the US Civil War. Material was needed for other purposes. Women had more important things to do than prance around in bell-shaped dresses. But for generations, those looking back associated the hoop skirt with the Old South2. This is in spite of the fact that the hoop skirt was a widespread fashion from Europe to the United States. In fact, the hoop skirt has become so connected in people's minds with the Confederacy that the University of Georgia has banned them from campus as inappropriate, along with Confederate uniforms. We might blame Vivien Leigh for that: her portrayal of Southern belle Scarlett O'Hara in Gone with the Wind made hoop skirts memorable.

Even during the US Civil War, however, Northerners tended to associate the frivolity of feminine high fashion with the despised Southern planter class. When Confederate president Jefferson Davis was apprehended by Union troops, the rumour spread that the Mississippi politician was wearing a hoop skirt disguise. Although this was not true, it made great copy for people tired of the horrific war. The song Jeff in Petticoats made its gleeful rounds.

Where Can You See a Hoop Skirt Today?

Possibly in a museum, such as the Road to Tara Museum in Atlanta, Georgia. Or in your crafty great-aunt's loo. This setting may seem a frivolous one for antique haute couture, and it brings up a delicate question. Just how did those ladies manage to go to the loo? A modern re-enactor demonstrates her skills in a tasteful fashion. (Apparently, a lot of people ask.)

1Hoop skirts could also be made of other materials, such as whalebone, wood, or cloth. This entry is primarily about the steel variety.2Like Katherine Anne Porter, who used hoop skirts as an out-of-time fashion statement.