The Virginia Reel Content from the guide to life, the universe and everything 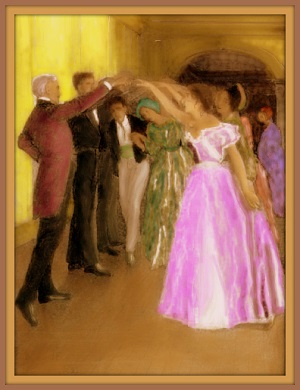 The Virginia Reel is an American Folk Dance that dates back to at least the early 1830s1. Unlike the Square dance that is usually composed of groups of four couples in a square, the reel is a line dance. The men and woman form a series of lines. For practical purposes the ideal length of each line should be about six couples, any less the dance will be be too short, any more can be exhausting. The moves of the dance are traditionally shouted to the dancers by a Caller, this helps to keep an experienced line from finishing far ahead of the others. There are usually a dozen or more lines on the floor who will follow the Caller's instructions.

Almost any lively tune can be used, The US Confederate song 'Dixie' and the Irish air 'Garryowen'2 are both excellent choices. The song will be repeated until the dance is completed.

As with any folk activity the following is only one, local, interpretation. In different areas there are variations. The biggest objection to writing down an observation of folk music or dance is that is stifles the growth by new generations. Unfortunately in this day and age the alternative is to watch it die. This is presented as one style of the dance, with the hope that it can be enjoyed by many of our readers.

Both sides start by forming a line about one metre (or yard) apart, men form one line, women form the other and the most experienced couple should be placed closest to the band as they will be the first 'head couple'. As the dance progresses each couple in the line will assume this duty3.

Both Sides in – Honour your partner!

The two lines approach the centre of the space between the lines, the women curtsey while the gentlemen bow. They return to their starting point.

Both Sides in – right hand around!

The two sides move to the centre and circle each other pressing their raised right hand together.

Both Sides in – left hand around!

The two sides move to the centre and circle each other, this time pressing their raised left hand together, and turning in the opposite direction.

Both sides in – both hands around – to the right!

The two sides approach each other, raise both hand and circle each other in the same direction as 'right hand around'.

Each couple dances to the centre and pass back to back, in the same direction as 'right hand around', without touching, and return to their place in the line.

Head couple only – Sashay down and back again!

The head couple come together and sidestep all the way to the end of their line, and back to their starting point. It is traditional for all the other members of their group to loudly cheer as the head couple passes by in each direction.

Head couple – right arm around – one and one half times!
Virginia Reel – Right to your Partner – Left to the line!

Head couple down – cast about!

When the Caller sees that each of the lines has completed the reel he will order them back to the head of the line. After reaching their staring point they both turn to the outside of the line and lead everyone to the far end.

The head couple will then join hands, leaving an arch for the other dancers to duck under before they return to their place in the line. When young children reach this point in the dance we encourage them to only extend their arms and not link fingers to allow the others to pass without difficulty.

Our original 'head couple' are now the last couple in line, and the second couple have now reached the head of the column.

Both Sides in – Honour your partner!

The entire sequence of moves is repeated until each couple has had a turn to be the 'head couple'.

This is an enjoyable dance, and can probably be taught to a small group of people in almost any part of the world in a few minutes. An Example of the Virginia Reel. Please enjoy, and give it a try – if you dare.

1The basic form probably has far older roots, but that goes beyond the bounds of this Entry.2Many think this is a person's name, but it is part of the city of Limerick, Ireland.3A few young children at the end of the line can add fun and interest to the dance.